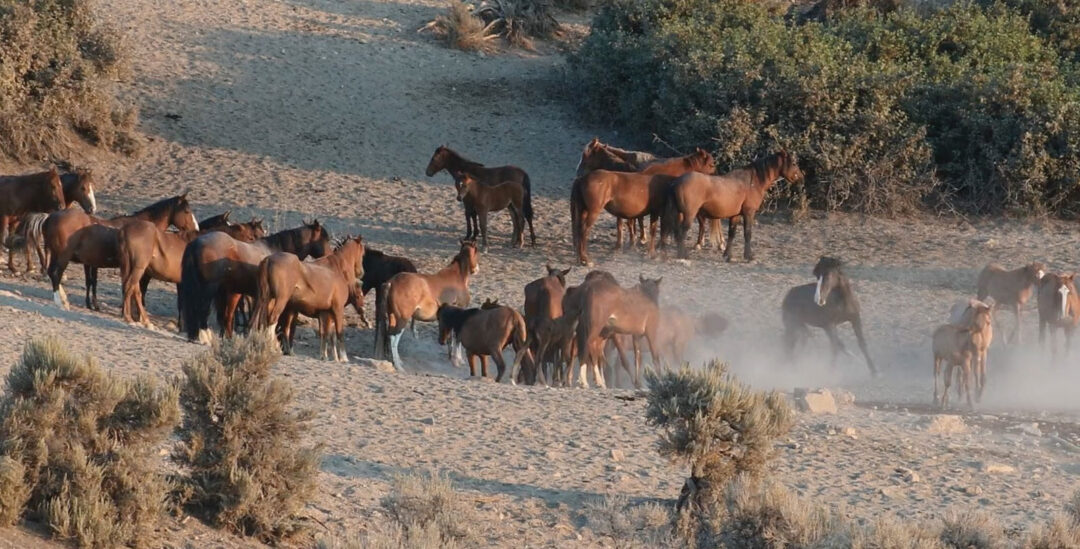 Wild Horses and Burros: A Most Contentious Issue

By John Hiatt  |   As a result of the passage of the Free Roaming Wild Horse and Burro Act in 1971 (the Act), wild (feral) horses and burros on Bureau of Land Management (BLM) and Forest Service lands in the West have enjoyed federal protection against capture, killing, or harassment. Without significant natural enemies, horse and burro populations have increased dramatically, and therein lies the problem.

Photo above: Feral Horses in Nevada. Photo by The Wilderness Society

When the Act was passed in 1971, it instructed the Secretaries of Interior and Agriculture to establish herd management areas (HMAs) to encompass those areas where wild horses and burros were currently living, and to manage those areas so that horses and burros would be living “in thriving ecological balance with wildlife and livestock.” The Secretaries are expressly not allowed to establish new HMAs in areas that were not occupied by wild horses and burros at the time of the Act. The Act provides that the Departments of Interior and Agriculture have the authority to determine appropriate numbers of the animals within the HMAs, and to round up “excess” animals. These may then be disposed of through adoption by private parties, or by “sale without limitation” of animals that are older than ten years or have not been adopted after being offered three times. The Act also allows for permanent pasturing of unadoptable animals.

A lot has changed since 1971. America has become a much more urban nation, and attitudes about animal welfare have evolved. In 1971 a much larger proportion of the population viewed horses and burros as livestock than do so today. Senator John Ensign of Nevada, a veterinarian by profession, added a rider to the Agriculture appropriations bill in 2004 forbidding the Department from expending funds to inspect horse slaughter facilities, thus ending the slaughter of horses for meat in the U.S. Although there is a significant market for horse meat in Europe and other parts of the world, he stated that “horses are like dogs and cats and we don’t eat them.” While this action did not directly impact the horses managed by the federal government, it limited the options of horse owners wishing to get rid of old or unwanted horses, and resulted in increased abandonment of horses onto public lands.

The Act applies to horses and burros equally despite significant differences, especially in how they are regarded by the public. Burros are much more likely to be regarded as “pets” rather than as work animals or as animals to be ridden for pleasure. As a result the BLM has been able to adopt out most of its “excess” burros, and there are also private groups willing to gather and care for them. But horses are more widespread, and there are lot more of them. The BLM estimates that the vast majority of the 88,000 wild equines on BLM and Forest Service lands in the West are horses, which doesn’t count animals on tribal, Park Service, and Fish & Wildlife Service lands. The carrying capacity of the designated HMAs is only about 27,000 animals. The BLM also has between 6,000 and 8,000 horses in short term holding facilities (corrals) and about 50,000 horses in long term pastures under contract in the mid-western states. It costs the BLM about $1.80/day for each horse in long term holding. The cost of the BLM’s wild horse and burro program is thus about $80 million per year, and growing rapidly.

Wild horse populations only exist on public land in the Western States. Nevada, with the highest proportion of public land of any Western State, also has the most horses, about half the national total or some 44,000 animals. The recruitment rate to the population is about 20-25% per year, which means that, in the absence of gathers, the population doubles every four to five years.

Ranchers and others concerned for rangeland health have been complaining for years about overpopulation of horses. At the same time, groups of wild horse advocates (of which there are many) have been arguing that wild horses are headed for extinction. Virtually everyone acknowledges that horses are majestic animals, and that the sight of a band of horses galloping across open country is stirring, but that is where agreement has historically ended. Even though the Act actually allows for “sale without limitation,” the political opposition to slaughter is so strong that for practical purposes it is not a viable option.

Since wild horses are federally protected, Congress is responsible for appropriating funds to manage them and also for determining policy. The vast majority of the members of Congress don’t have any wild horses in their districts, but they do have wild horse advocates, who are vocal and organized. The only action by Congress in recent years has been to authorize a study by the National Academy of Sciences on options for managing wild horses. That study recommended fertility control as the most acceptable option for controlling horse numbers.

Since stallions are both capable and willing to impregnate as many mares as they have access to, the only real option for fertility control is to control the fertility of mares. Surgical sterilization of mares is very difficult, leaving some sort of chemical fertility control as the most feasible option. There are two products on the market, PZP (porcine zona pellucida) and GonaConTM, which when administered to mares by injection acts as an immunocontraceptive which prevents pregnancy for up to 24 months. Two initial injections about six weeks apart are most effective. These products can be injected with a dart gun, so a person doesn’t have to actually capture a mare to administer the product, but in actual practice the mares must be rounded up to positively identify each one and keep track of when fertility control drugs were administered.

With a current population of some 88,000 animals and an estimated 16,000 new foals born in 2019, experts estimate that at least 35,000 mares a year would have to be inoculated with an anti-fertility vaccine to stabilize the current population. This is an almost impossible task, especially since horse advocacy groups strongly oppose roundups. So what is to be done?

Simple logic says that an ever increasing number of herbivores on a static or declining forage base is a recipe for disaster. Some horse advocacy groups say: “just let nature take its course.” Although this sounds like an easy way out, horses are the biggest, strongest animals on the range. They will be the last to starve or die of thirst, and will destroy the range in the process. Two of the largest animal welfare organizations in the country, the Humane Society of the United States (HSUS) and the American Society for the Protection of Animals (ASPCA) have recognized that we have a problem and that the present course is unsustainable. At a recent conference on the subject in Reno HSUS, ASPCA, the Wildlife Society, and the Cattlemen’s Beef Association have all agreed that, while lethal control of horse numbers is not an option, reduction in numbers to Appropriate Management Levels (AML) as soon as possible is essential to avoid a catastrophic die-off of horses and irreversible damage to the range that sustains them. However, this can only happen if Congress is willing to appropriate the money needed to gather the excess horses and pay for long-term pasturage, which could cost as much as a billion dollars over the next decade. This is in addition to the $80 million per year that the BLM currently spends on the wild horse and burro program. Yet the arithmetic shows that every month that goes by without addressing the over-population problem just means that it gets bigger and more expensive to solve.

The political power in the world of wild horses lies on the side of the wild horse advocacy groups, not ranchers or wildlife and rangeland advocates. It is really groundbreaking that the HSUS and the ASPCA have recognized that the current situation is not sustainable and is leading inexorably to a rangeland catastrophe if not addressed in the near future. It will be both interesting and instructive to see if a coalition of groups with a variety of interests can persuade Congress to do the right thing and appropriate enough money to put the wild horse and burro program on a sustainable track.

John Hiatt, a desert activist living in Las Vegas, Nevada, is a member of the Desert Committee, and is a board member of Friends of Nevada Wilderness. His particular concerns have been water usage and protection of Wilderness Areas.

Photos are taken from a video created by The Wilderness Society: Horse Rich – Dirt Poor, available on YouTube at https://www.youtube.com/watch?v=q6h242vy_q8.