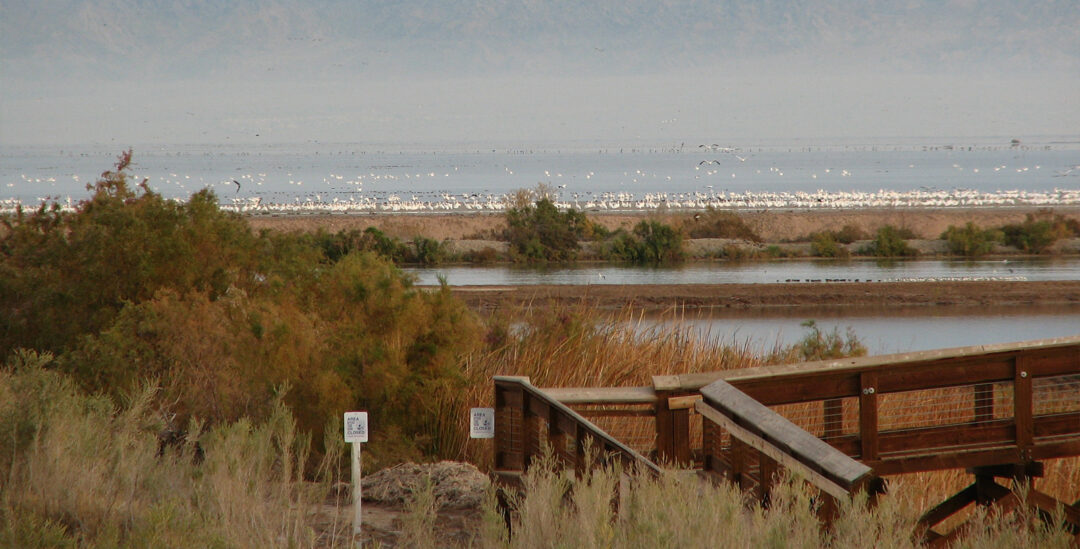 Why We Need The Salton Sea

The Salton Sea, near Californa’s southern border, is a GREAT place. It is home to lots of birds, a State Recreation Area, a State Wildlife Area, and a National Wildlife Refuge. It is California’s largest lake. It has been a military training ground and a set for movies. NASA uses it to calibrate satellites for measuring global surface temperatures. It hosts some of the most spectacular sunsets on the continent. And it is misunderstood by many. Some are offended by occasional odors. Others wonder why we should bother with what is often called an engineering accident. There is a huge need to understand the facts about the lake and its current condition.

For millions of years wildlife of extreme southern California benefited from flows of the Colorado River, which spilled into the Salton Sink before continuing to the Sear of Cortez. Fossils up to three million years old show that at least forty species of water birds enjoyed the area. Shoreline middens of Native Americans reveal they used a rich birdlife. So this wetland is not an accident at all.

In the last hundred years, the Salton Sea, now maintained by agricultural drain water, has become even more important to birds. Annually, up to 3.5 million migrating eared grebes have feasted on clouds of pileworms. Thirty thousand American white pelicans (80% of the western continental population) have gorged on fish and 100,000 shore birds have fattened on tons of waterboatmen, midges and pileworms in the shallows. The Salton Sea has been the most important bird area in the Inter-mountain West and desert regions in the spring, and in the fall is second only to the Great Salt Lake. The Sonny Bono Salton Sea National Wildlife Refuge, described as “California’s Everglades,” has documented 424 bird species.

Birds are not the only migrants to visit. In past decades people have visited in numbers rivaling attendance at Yosemite. Birding attracts visitors from nearly all 50 states and an average of 20 foreign countries.

But time is catching up with the Salton Sea. High evaporation is increasing salt concentration, and the productivity that has produced so much life is poisoning itself. The Sea now has 60 parts per thousand (PPT) salt concentration, compared to the Pacific Ocean at 35 PPT. Experts recognize 60 PPT as close the limit for reproduction of tilapia, the remaining game fish. Concurrently, the waste products of the abundant life in the Sea are turning into hydrogen sulfide and ammonia. Scientists have predicted this condition for decades. It happens around the world in terminal lakes. At low levels these products are of little concern, but they have been accumulating for a century, concentrated by a relentless desert sun that annually evaporates icwe five feet of water from the surface.

The tremendous quantity of living and decomposing dead fish, birds, bugs, worms, and algae are part of a natural cycle. Normally the denser layer of saltwater keeps waste products sequestered near the bottom, but strong winds can bring them to the surface. When this happens, oxygen is depleted from the entire water column, and fish cannot survive. Lots of fish are now dying at the Salton Sea. Visitors and neighbors often incorrectly associate the dead fish with pesticides and toxic chemicals they think flow in from nearby agriculture. This assumption is incorrect.

In September 2012, people in Ventura County and the San Fernando Valley complained of a foul odor. Air quality officials checked their sensors deployed throughout Southern California and discovered a pattern. It came from the Salton Sea. A strong wind from the south had blown a foul odor far to the north. The Sea had burped up and gassed-off a huge release of hydrogen sulfide into the air. Some farm workers in nearby Mecca reportedly needed medical attention. This was the first such event we know of.

Odors people notice at the Sea likely result from decomposing algae that is blown ashore where it concentrates. Although such incidents are more frequent than hydrogen sulfide gas-offs, they are not common. Different species of algae provide similar events on the Pacific Coast. For some people uncommon events can, of course, make a strong impression.

A final challenge remains for the Salton Sea. It is shrinking. But even if there were sufficient water to maintain its level, accumulated nutrients would create the same condition we have today. Now, the receding waters have revealed a new problem: an exposed shoreline that is increasing about a thousand acres a year. Desert winds raise dust from these exposed shorelines into the air. It is well documented that airborne dust can trigger asthma attacks. These fine particles also contain salt and sulfides that were once dissolved in the water, and these also constitute a threat to the mucous membranes of humans, to other wildlife, and for the growth of nearby crops.

We have predicted the impacts of the declining Salton Sea, and we had a possible glimpse of it this spring. I usually get annoyed when the wind blows. Dust gets everywhere. My eyes water. This spring seemed to be windier than normal. The Sea churned with waves, mixing the hydrogen sulfide into the water column. Along the southeastern shore, where I work, we noticed a fairly continuous tilapia die-off, all of the fish about seven inches long. Did this mean reproduction had failed? Maybe – at least in this part of the Sea.

Then, over the weeks, we noticed our familiar eared grebes washing ashore, dead or dying by the hundreds, emaciated. We submitted some for expert analysis and were not surprised: no obvious disease. The churning of the water had likely reduced their food supply of pileworms and barnacle larvae to starvation levels. They would not make it to their next stop in Mono Lake or Great Salt Lake. My annoyance at the wind was justified.

So, in the face of all this, what will happen to the birds that have relied on the Salton Sea? Their former options no longer exist. In historic times dozens of large, reliable wetlands such as Tulare Lake in California would have been back-ups. Now California has 91 percent fewer wetland acres than it did 150 years ago: the result of filling, draining, and rerouting of water for human uses.

Plans are in place and are being refined by the day to build a large complex of managed ponds or mini-Salton Seas around the existing lake. Each would have out-flowing water to discharge salt and accumulated nutrients. This shallower water will not accumulate hydrogen sulfide, which will volatilize into the air and not accumulate as it does now. The plan has been tested and shown to produce a healthier wetland for birds like eared grebes. For them, it can’t come soon enough.

We need the Salton Sea or its next, healthy, managed version. We need it quickly. The birds need it for foraging because their former wetlands have been dried up. We need it so we and future generations can continue to appreciate nature in the Salton Basin. We need it for our health so we will not have to breathe ever more sodium sulfide dust. And we need to control salinity and establish water quality that will protect these values. We need it because we enjoy those few stress-free moments, basking in the last minutes of daylight on the shore of the Salton Sea, watching spectacular sunsets and being in awe. We need the Salton Sea because it is still a great place, but it needs our help.

Chris Schoneman grew up in Southern California with a great interest in wildlife. After getting his degree in Wildlife Management from Humboldt State University, he started his career with the U.S. Fish and Wildlife Service in 1988 working on National Wildlife Refuge. Managing wetlands in the West for maximum wildlife value has been his favorite challenge. He has been the Manager of the Sonny Bono Salton Sea National Wildlife Refuge since 2004.