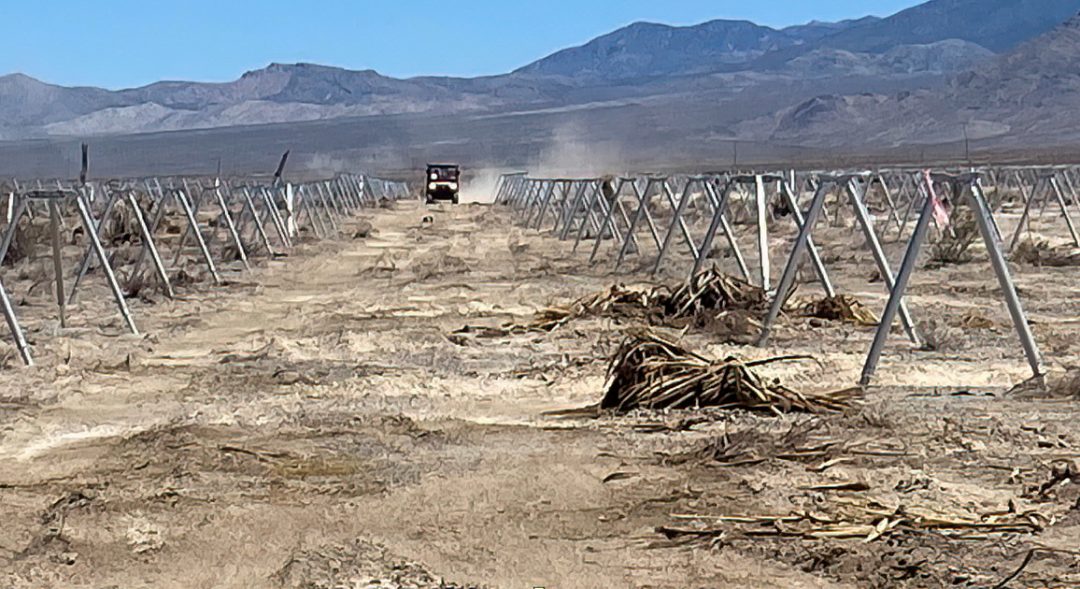 When  Is a Review Not a Review?

Greenlink Transmission Line Is Being Fast-Tracked

Sometimes a word is repeated so diligently that it detaches from itself and becomes a dead thing. It represents a vague idea, or worse, an abstraction. The danger here lies in that the dead word takes the place of an individual’s own thinking. It is a stand-in masquerading as thought. This is a tactic of the Industrial Order; to propagate its war with nature, the Industrial Order has had to colonize the human imagination.
Among the very best examples is the word “Green.”
We all know the connotation. It has something to do with the solution to climate change, something to do with a way of life we can feel better about, that does not pillage and exploit the natural world the way civilization has for centuries.
The phrase “climate change” has itself become an abstraction.
It detracts from the big picture, in which changing climate is but one symptom of a much larger problem. You know where I’m going with this.
We might want the luxury of identifying a singular enemy (“climate change”) that can be solved by a singular solution (“green energy”). The Industrial Order wants that because it wants to continue to grow itself and increase its profits indefinitely. That is why its “green” and “clean” solution will conveniently grow the economy and fantastically increase the number of “good paying jobs.”
Last year, I started an organization called Mojave Green in part to reclaim the wildness that is necessary for all original thought. I started camping outside the Yellow Pine Solar facility under construction in the Pahrump Valley, bearing witness to the catastrophe of “green energy” on our public lands. Let me tell you: they are ripping the heart out of this place.
Here is the Yellow Pine Solar site before and after: We know now that the desert soils and plants are sequestering a significant amount of carbon. In a ten-year study that took place from 1997-2007 at the Nevada Desert’s Free Air CO2 Enrichment Facility (NDFF), scientists pumped excess carbon into the air and walked on boardwalks so as not to disturb the soil’s delicate crust.1 They found that the desert is indeed capturing carbon from the atmosphere, just like a forest. When we bulldoze these places, we get more carbon dioxide in the air.

I must tell you now about Nevada Energy’s Greenlink Transmission Line proposal. Nevada Energy is owned by the investment firm Berkshire Hathaway, which is owned by the billionaire Warren Buffet. There would be two parts to the transmission line: Greenlink West and Greenlink North. The western portion would run from Las Vegas to Yerington, near Reno. The northern portion would cut across the center of Nevada, through the depths of a wild outback country.

The Nevada Bureau of Land Management is in the midst of an environmental review (what does that even mean anymore?) for Greenlink West. Like everything, they are doing it piecemeal. But the BLM is only reviewing the impacts of the transmission line itself. They are not taking into account the cumulative impacts of the all-out Solar Disaster to which it would open the door. That is, after all, the purpose of the so-called “Greenlink” line. Their strategy is to turn the landscape into an abstraction, a series of fragmented markings on a map in some corporate office, in a hundred corporate offices, a thousand corporate offices, with abstract names and language to reinforce their incessant turning away from what is.

NV Energy map of Greenlink West and North, with my green squiggle lines added to represent solar facilities. We’re in a corporate meeting room. I have added my own green squiggly lines to NV Energy’s marketing materials above. These represent the solar build-out that is being ignored in the Greenlink West’s environmental review.  Look at the blue sky. Look at the language in the description: The emphasis is not on a new direction to change and save life as we know it. It’s on the “green energy economy.”

Solar that destroys intact ecosystems is cost-effective for the Big Solar industry because it is cheap. They could build solar over the 2.5 million acres of parking lots in the United States, but that would not translate into high enough profit margins. Greenlink is also “cost effective” for Nevada Energy because the 2 billion dollar price tag will be passed on to its customers.2

To wash your mind clean, take hold of the river.

In 2021, the Nevada State Senate passed Senate Bill 448, an omnibus bill which contained legislation about both electric vehicle charging stations and transmission. Had the transmission portion been introduced alone, it might not have past so easily. The bill requires that Nevada Energy produce a plan for “transmission infrastructure for a clean energy economy” and construction must be completed by 2028.3 This overrides the Nevada Public Utilities Commission’s authority to reject the project, and it calls into question the validity of an environmental review for a project that must be approved.

Senate Bill 448 was written and introduced by State Senator Chris Brooks. It happens that Chris Brooks owns a consulting firm that advises developers on utility-scale solar projects, such as the 7000 acre Gemini project outside Valley of Fire State Park. One year after introducing SB 448, Brooks resigned from political office to accept a private-sector position in the Renewable Energy Industry.

Furthermore, the way in which the Bureau of Land Management is evaluating the project is downright illegal. By not considering cumulative impacts, BLM is violating the Code of Federal Regulations for the NEPA process. Section 651.6 states that:

“NEPA analyses must assess cumulative effects, which are the impact on the environment resulting from the incremental impact of the action when added to other past, present, and reasonably foreseeable future actions. Actions by federal, non-federal agencies, and private parties must be considered.”4

In the case of the Greenlink transmission line, “reasonably foreseeable future actions” should obviously include the immense areas of Nevada wilderness that would be mowed down for utility scale solar projects.

In May, I attended the BLM’s public meeting in Las Vegas. The meeting was at Centennial High School’s auditorium, and the school didn’t provide the BLM with projector equipment, so they made do with poster boards placed around the stage. When they said that they weren’t going to post a recording of the meeting online, I decided to capture video with my iPhone camera. I posted this to my Mojave Green Youtube Channel.5

It shows the BLM representative walking back and forth across the stage with the poster boards on easels behind him, mostly obscure maps that are notoriously difficult to discern. The maps show closeups of a dozen or so different areas, areas of concern for the transmission line and showcasing the eight different alternatives throughout various regions. He reads off a paper script with a single staple in the upper corner.

When I watch the recording, the first thing that stands out to me is that the BLM representative speaks about the project as if it is happening, and not as if it is under review, using verbs like “will” and “going to.” At 2:35, beginning to address the “project location,” he says, “we’re gonna go through Clark, Nye, Esmerelda, Mineral, Lyon, Story and Washoe counties. We’ve got approximately 469 miles of new transmission and associated substations that we’ll be working with. The right of way will include approximately 13,600 acres [he reads thirteen hundred at first].” At 15:00, the presenter starts to talk about the Resource Management Plan amendments: “so, we’re gonna amend the plans. There will be—it’s quite a few—there are six Resource Management Plans…There are gonna be some visual resource amendments.”

Who is the “we” that he refers to? The Bureau of Land Management is supposed to be objectively evaluating project proposals; this “we” feels uncomfortably out of place.

At 21:55, Kevin Emmerich asks a question about where Visual Resource Management plans in Southern Nevada would be amended. He asks for a “ballpark.” The BLM presenter answers that he doesn’t know, so Emmerich adds that “this should be on a map.” The response is, “okay, can you put that on a comment card and send it to us, please?” The problem is, from the tone of this meeting, it sounds like all the comment cards in the world won’t make much difference.

Let’s say we do it BLM’s way and ignore the code of regulations. Let’s only look at Greenlink West, not North, and have a rundown of some of the impacts of just the western transmission line itself.

The line would likely be built within the boundaries of the Tule Springs Fossil Beds National Monument6 which was established to protect Ice Age fossils and the visual integrity of the surrounding landscape. Poles would need to be driven up to thirty feet into the Earth, easily causing damage to irreplaceable fossils. Adequate study according to the Paleontological Resources Preservation Act of 20097 (PRPA) (16 U.S.C. § 470aaa 1-11) would take up to three years (and NV Energy wants to start construction on the line next year). This prompted the Hopi Tribe to call out the BLM’s “rogue actions” in their letter to the National Park Service.

Critical Mojave and Great Basin ecosystems and connectivity corridors that support desert tortoise, Bi-State sage grouse, pronghorn antelope, bighorn sheep, and Joshua trees are all on the line (pun intended!). Connectivity corridors are especially important because if we lose them, the animals can’t migrate, mingle, and breed as they were intended and this leads to degradation in the health of not just the animal species, but the entire ecosystem. Animals and birds eat plants and poop out their seeds elsewhere. Things have a way that they need to move, like an invisible current we cannot see (something electric).

The line would cut through special wetlands at the Amargosa River outside Beatty. And it would sever Sarcobatus Flat, where pronghorn sheep go to give birth.

There would be exceptional impacts to scenic areas throughout the state. These areas include the Desert National Wildlife Refuge, and the Spring Mountain National Recreation Area outside Las Vegas. They include Walker Lake, the Specter Range, the Amargosa Valley, Oasis Valley, Sarcobatus Flat, Lida Valley, Big Smokey Valley, Gold Mountain, the Mina area, Wassuk Range, Fort Churchill, and Mason Valley. There would be massive microwave towers adjacent to Wilderness study areas. These places will never feel the same in our lifetimes or our children’s lifetimes.

The proposed “green energy” buildout in ecosystems that provide crucial carbon storage, biodiversity, and cultural landscapes, is not the solution to anything. It will only exacerbate the extinction crisis, the climate crisis—the crisis of perpetual harm. The BLM is folding under the pressure of industry and NV industry’s corporate empire. They are failing to evaluate the Greenlink West project according to NEPA regulations. This is undemocratic, illegal, and it must be challenged in a court of law.

Thank you to Basin and Range Watch for information about Greenlink West’s biological and cultural impacts.

Shannon Salter lives in the Mojave Desert of Nevada and California, is a Ph.D candidate at the University of Nevada, Las Vegas, and is an advocate for preservation of unspoiled deserts.