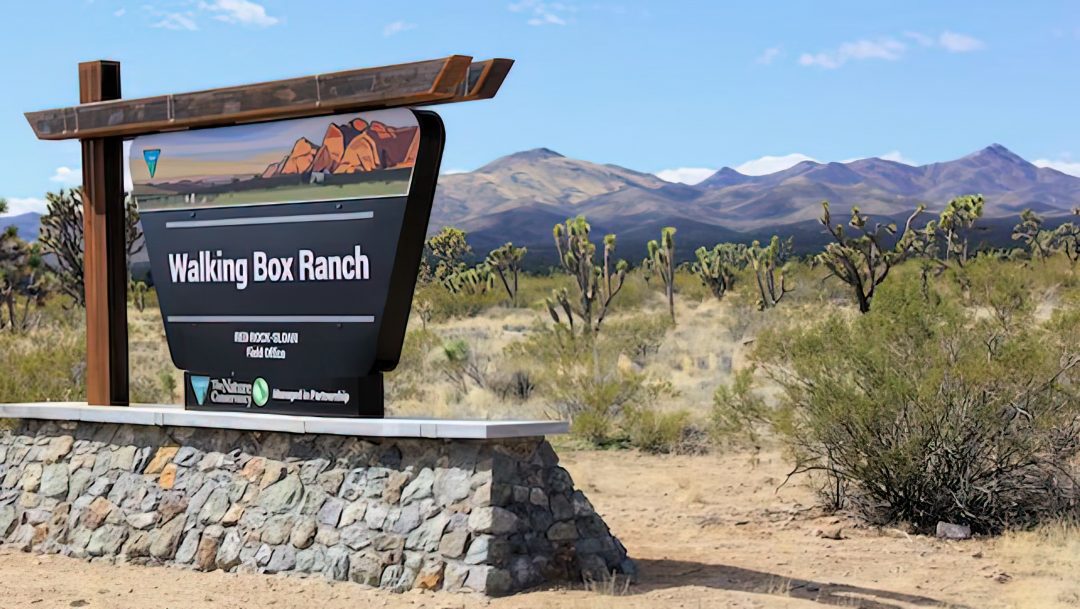 by Judy Bundorf and Jim Stanger

Nestled in the heart of the proposed Avi Kwa Ame National Monument, Walking Box Ranch represents a microcosm of Nevada history, including ranching, mining, entertainment, politics, and more recently, conservation of the flora and fauna of the Mojave Desert. Located seven miles west of Searchlight, Nevada, and across Nipton Road from Wee Thump Wilderness, the ranch was listed on the National Register of Historic Places in 2009. The 160 acres is surrounded by the Piute-Eldorado Area of Critical Environmental Concern (ACEC) for the desert tortoise. Although the ranch is now federally owned and is administered by the Bureau of Land Management (BLM), the Nature Conservancy holds two conservation easements on the property. A 5,000 square foot, Spanish revival style ranch house was built in 1931-32 by silent film stars Rex Bell (whose given name was George Beldam) and Clara Bow, the “It Girl,” as an escape from the hectic Hollywood life

Visitors they entertained at the ranch are said to have included Clark Gable, Carole Lombard, Errol Flynn, and Lionel Barrymore. General Patton and some of his troops also visited.

Bell purchased the property in 1931 from John Woolf. The land that Bell acquired was originally a portion of the Rock Springs Land and Cattle Company, which was formed in 1894 and consisted of 1,000,000 acres. Bell’s purchase included water and grazing rights. The grazing rights were reported to extend from the ranch, north to Railroad Pass, east to Highway 95 and the Colorado River, and west across Crescent Peak and the California border. The name of the ranch, which was the brand on the cattle, is represented by a camera on a tripod. Following his departure from Hollywood and his foray into ranching, Rex Bell owned and operated a western wear store on Fremont Street in downtown Las Vegas and became involved in politics. He was elected Nevada Lieutenant Governor in 1954 and served until his death in 1962. He was campaigning for the office of governor when he died suddenly. His son, Rex Bell, Jr., was also in politics, served as Clark County District Attorney, and was elected to one term as Lieutenant Governor. He passed away in 2011.

The ranch has undergone several changes in ownership since 1930. Bell sold the property to Karl Weikel in 1951, and Weikel changed the name to YKL Ranch, representing his brand. Weikel ranched there until 1989, when he sold it to Viceroy Gold Corporation as a corporate retreat. The mining company removed a number of the outbuildings and built a new bunkhouse and adjacent tennis courts. The ranch was purchased by the federal government in 2005, and the house has since undergone historical restoration.

Even though tours were given at the ranch, it has never been officially open to the public as a tourist destination. That is BLM’s goal, however, and is one of the reasons that the Friends of Walking Box Ranch (FWBR) organization was created. With limited staff devoted to managing the ranch site on a day-to-day basis, partnering with another organization brings extra resources to bear in reaching the milestones necessary to open the site to the public much sooner than it would otherwise take.

The first task, especially post-pandemic, was to continue site improvements. This started with establishing and maintaining a basic site stewardship regime. During the pandemic, with BLM’s volunteer program on hiatus, most on-site ranch work was paused. During that time nature started taking over. Once volunteer activity was allowed, on-site work crews arrived to find Russian thistle and other undesirable plant life covering the grounds between buildings and throughout the corral area. Groundskeeping work began immediately, and with assistance from community volunteers and the business community, we’ve been able to clear away much of that overgrowth. Inside the ranch house, floors and other surfaces were cleaned, and traps were deployed to remove critters from the residence. Of course, this will be a never-ending endeavor, and the Friends group’s ultimate goal here is to recruit standing groundskeeping and house teams to maintain the grounds on a schedule.

These services are necessary if the house is to be refurnished which is, indeed, the plan. Many items from the Bell’s life at Walking Box Ranch were donated by the Family to UNLV: furniture, ranch equipment, personal items, and more. BLM is working with the university on an agreement that would place furniture and other items back in the house. Clara Bow brought a unique aesthetic to their desert ranch. Some of their mission-style furniture and other items from their time at the ranch will help tell their story and bring a sense of homeyness back to the ranch house. Future tours of the site will be much more interesting if it looks more like it did when the Bell Family lived in it.

The story of the Bell Family is only part of the rich history of the ranch. There are other stories that make up the tapestry of experiences that are part of Southern Nevada’s history, including early cattle ranching and indigenous culture and history. BLM is working with UNLV’s Public History Department, regional indigenous groups, and FWBR in creating interpretive programs that place those stories into context. Public History graduate students have been researching and cataloging items from the Bell Family Collection since 2019, and some interpretive material has already been produced. The next step here is placing equipment currently stored throughout the site in strategic places that help visitors understand the ranch during its cattle working heyday combined with informative panels, kiosks, and other signage. Programs are being developed that can be included in house and site tours plus on-site “living history” style experiences.

Walking Box Ranch in the snow As the site gets closer to being ready to open to the public, we’ll be recruiting people to fill new roles. Greeters will meet visitors as they arrive and tour the site grounds. Although signage is helpful, having people available to answer questions will keep visitors engaged until the next scheduled tour starts. Those tours will be facilitated by a team of docents, people trained in leading visitors on tours of the house or grounds following one of a handful of interpretive programs. Although initially the greeters and docents will likely be volunteer positions, those are two roles that have the potential to evolve into paid positions.

Current plans call for the ranch to open to the public for scheduled tours during the weekend. As interest grows and staff and volunteer availability increases, hours of operations will extend into the week.

The mission statement for the group reads:

Friends of Walking Box Ranch supports the preservation of this historic ranch through interpretive and educational programming, support of academic research, site stewardship, and restoration efforts.

Jim Stanger is the Board President of Friends of Walking Box Ranch and Friends of Sloan Canyon. Working at the ranch has given him a voracious appetite for learning about historical preservation and interpretation. During the pandemic he discovered the joy of motorcycles, and so you may hear of that also if you should meet him.

Judy Bundorf has been a resident of Nevada for 60 years, lives in Henderson, NV, and has a second home off the grid near Searchlight. She is on the Board of Directors of Basin and Range Watch and Friends of Walking Box Ranch. Since 2008, she has been actively working to prevent industrial development on pristine Mojave Desert lands in Nevada, Arizona, and California.