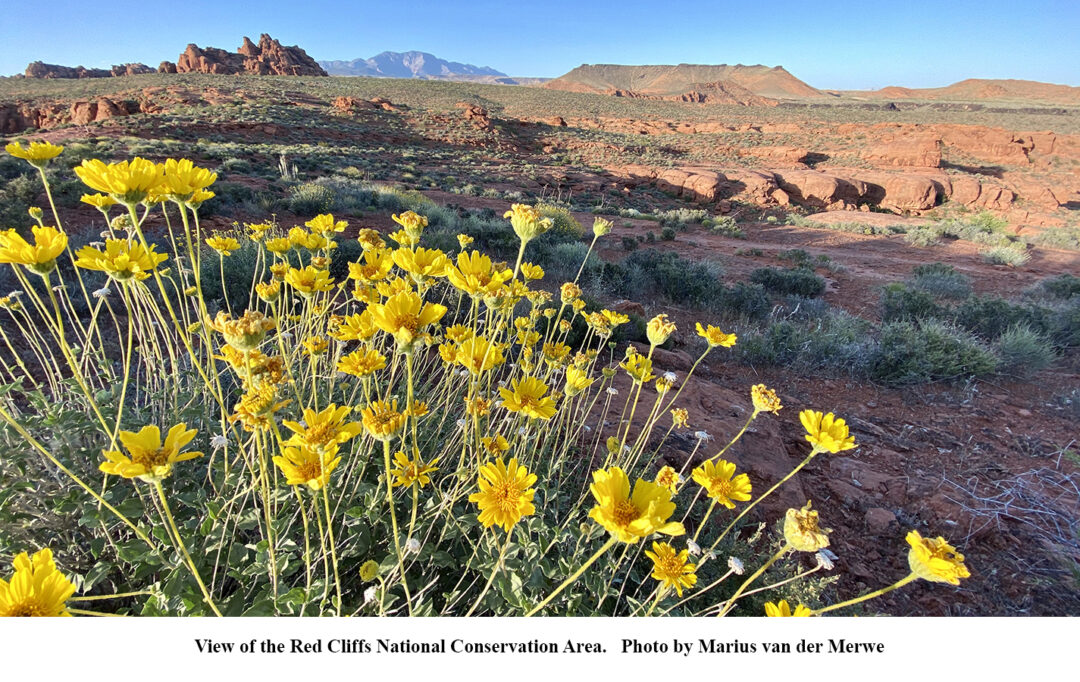 The Red Cliffs National Conservation Area (NCA), located in Washington County, Utah, was established in 2009 to conserve, protect and enhance threatened and endangered species that live there, as well as other congressionally-designated cultural, natural and recreational resources. The county, 2400-square miles in the southwest corner of the state (see map 1), is at the convergence of the Colorado Plateau, the Great Basin, and the Mojave Desert, with elevations of 2,000’ to over 10,000’, providing unique habitat for a wide variety of species. Mesas, buttes, sheer cliffs of red Navajo sandstone and expansive views are the hallmark landscapes, including the towering formations of Zion National Park. The NCA, composed of about 45,000 acres at 3,000’– 5,000’, is a mix of desert landscape and red rock formations. Most of the county’s land is managed by federal agencies.

Due to its climate and outdoor environment, the county has become a retirement, tourism, and recreation destination. It has experienced almost a four-fold increase of population over the last 30 years (to 183,000), and is projected to reach over 500,000 by 2065. The metropolitan area, centered in St George, is bookended by Zion National Park in the east and the red cliffs of the NCA in the west, with concentrated development along the NCA’s boundary. This growth has put economic development in conflict with environmental stewardship. [see map 2]

This story begins when the Mojave desert tortoise was listed as “threatened” under the Endangered Species Act in 1990. After many years of negotiations with local officials, Washington County agreed to a Habitat Conservation Plan in 1995. The plan protected tortoises and their habitat by establishing the Red Cliffs Desert Reserve, in exchange for enabling property development in tortoise habitat elsewhere in the county. Displaced tortoises were to be relocated to the Reserve. The county also pressed for approval of a new highway that would pass through a part of the Reserve, but it was rejected at the time as incompatible with protected habitat.

But ten years later, in 2005, a draft public lands bill proposed giving the county a large piece of federally-managed land and granting a “Northern Corridor Highway” through the protected Reserve as part of a ring road around the metro area A group of local citizens formed a non-profit organization (now known as Conserve Southwest Utah) to protest those provisions in the bill. This resulted in several years of negotiation and culminated in a conservation victory. The 2009 Omnibus Public Land Management Act (OPLMA, section 1974) reversed the originally proposed land transfer and created the NCA as an overlay of protection on the Reserve. (1) This effectively denied the highway proposal which clearly would not further the protection of the tortoise and its habitat.

A “growth management/visioning process” grew out of this same citizen reaction, defining principles for “smart growth” that would avoid urban sprawl and continue the protection for these signature lands. But local governments have resisted the master planning required to implement these smart growth principles, and the resulting sprawl and poorly planned growth is largely responsible for the projected traffic problems that the Northern Corridor Highway is proposed to alleviate.

Despite these actions by citizens to protect the NCA lands, county government (with the support of state and federal representatives) continued to press for the Northern Corridor Highway through an appeal to the Department of Interior in 2016 and Congressional legislation in 2018. These appeals were unsuccessful.

Highway advocates are now attempting to set aside NCA protections by seeking approval of a highway right-of-way and revisions to Resource Management Plans (RMP) through the National Environmental Policy Act (NEPA) process. The Bureau of Land Management (BLM) is managing that process, and their website is a primary reference for project details. (2) Under consideration are three routes for new highway construction (alternatives 2, 3, and 4) as well as two much-less-impactful modifications of already existing roadways (see map 3). The Draft Environmental Impact Statement (DEIS) and draft RMP revisions are now in NEPA’s public commenting phase, which ends on September 10, 2020. Approval is targeted for January 2021, prior to the next presidential inauguration. Conserve Southwest Utah is organizing the public commenting.

Highway construction will result directly in tortoise deaths and relocations, but indirect long-term mortality due to noise, vibration, light pollution, trash, and segmentation of habitat is a bigger issue. This is the densest animal population and the smallest area of protection for the tortoise in its range. Effects of the 4.5-mile highway extend over 4,000 meters on both sides. (3) The Northern Corridor Highway would exacerbate invasive species, open fire and predator pathways, damage Native American cultural resources, and greatly decrease the recreation experience through incursions into the trail system.

As mitigation for this damage, the county proposes a “Zone 6” (see map 2) addition to the Reserve. This area is a mix of BLM land (including an Area of Critical Environmental Concern) and state school trust lands. It is discontiguous with the rest of the Reserve. While it has a tortoise population, it is also open to a wide range of damaging activities (many of which would continue) and is planned to be bisected by several roads in the future. Mitigation is an invalid argument in that the NCA and Reserve themselves are already mitigation for damage done throughout the county. Even though Zone 6 is a large space, it is a poor habitat, separated from the rest of the population, and largely already protected by the ACEC.

The county has a valid concern for future traffic congestion along the north side of the greater St. George metropolitan area. Traffic models indicate bottlenecks at several intersections during peak hours by the year 2040 if improvements are not made. The DEIS shows that the new highway alternatives reduce these bottlenecks, but with significant environmental impacts. The DEIS also shows that enhancements to existing roads outside the NCA (alternatives 5 and 6) do a better job, and with virtually no environmental impacts. (4) Yet the BLM proclaims it prefers alternative 3 through the NCA over alternatives 5 and 6 outside the NCA. While the reason is not explained in the DEIS, it is generally understood that the county has requested Utah’s congressional delegation to ask the Department of Interior for approval as a favor, regardless of the DEIS technical findings. There has been no cost analysis performed as yet, and there are design alternatives to the various solutions that would impact both cost and benefit.

The Need to Reconsider

In July 2020, two human-caused fires, enabled by existing roads in or near the NCA, burned 14,000 acres, or over 20% of the NCA and Reserve. This has significantly changed the conditions assumed as a baseline for the DEIS. Fire is one of the most threatening events for the desert tortoise. The impact of these fires to the existing population is unknown until it can be surveyed, but it is likely to be severe.

Utah in general, and Washington County in particular, hold the position that there should be no federally-managed lands. There have been many assaults, both frontal and more subtle, aimed at wresting control of these lands from federal management. There is a disdain for the Endangered Species Act, for the National Environmental Policy Act, and for efforts to protect lands when economic development may be impacted. This step to force through the Northern Corridor Highway is a subtle assault, taking a bite into the protections and setting a precedent.

In addition to the environmental impacts of the highway, there are several legal questions:

The DEIS fails to address these questions, and formal requests to consider them have been denied.

Washington County entered into the Habitat Conservation Plan knowing that a highway would not be allowed, in exchange for enabling unencumbered development throughout the rest of the county. Now that development has largely been completed, the county no longer needs the HCP or the protections it ensured. In the final months before the next election, it sees the NEPA process with a cooperative Department of Interior as its last best chance.

But many citizens of Washington County see the Northern Corridor Highway as an unnecessary and illegal destruction of protected habitat for species that are continually stressed for survival in competition with human economic development. The natural environment is our local economic engine, attracting businesses and visitors from around the world. To destroy this especially sensitive area when there are better solutions is not sensible.

See the Conserve Southwest Utah website (https://conserveswu.org/northern-corridor-highway/) for details about issues and for guidance on how to develop and submit a citizen comment on proposed highway.

Tom Butine grew up in Michigan; was educated in science; worked as an engineer for Boeing Company; and became involved in conservation after retirement. He has long been involved in outdoor recreational activities, and these interests lead to his involvement in conservation, environmental, and social issues, especially anthropomorphic climate change.

1) This bill also proposed authorization for the Lake Powell Pipeline, which would also impact the tortoise, but that’s another story. The Pipeline is going through the NEPA process at the same time as the Highway, and Conserve Southwest Utah is organizing its public commenting too.