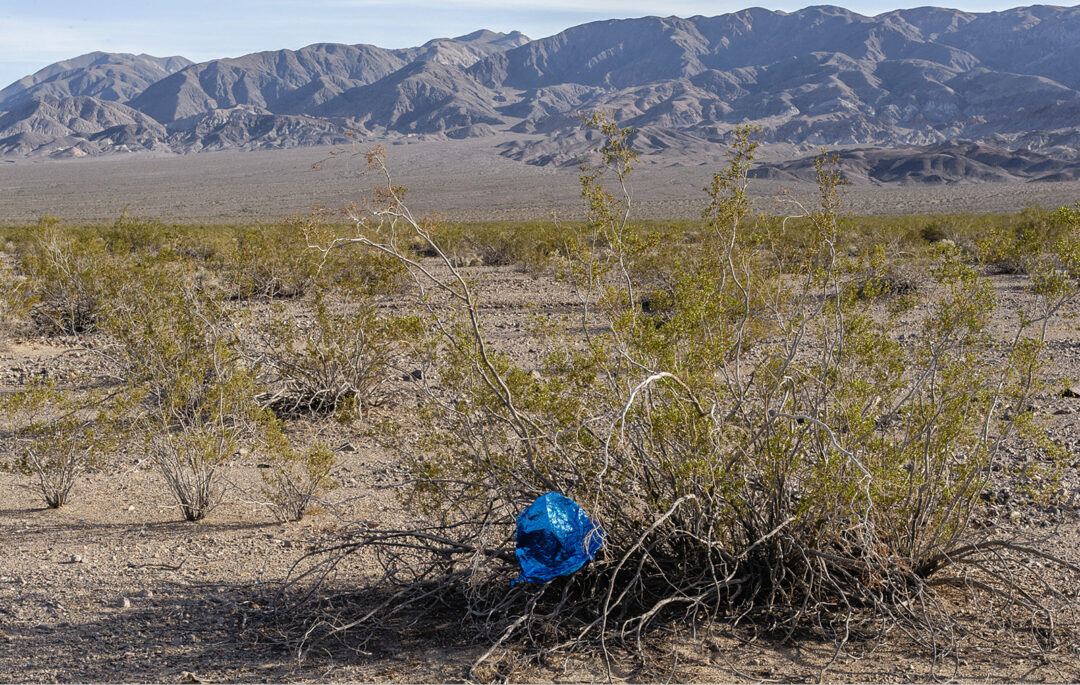 Up, Up And Away… But Not Quite – The Problem with Balloons

By Birgitta Jansen  |  Death Valley’s Backcountry Law Enforcement Ranger Bernard and I were driving down Panamint Valley Road enjoying the impressive sweep of the valley surrounded by rugged mountains, when we spotted a dot in the sky. Being long-time Mylar balloon watchers, we knew immediately what it had to be: a Mylar balloon. It looked like it was coming in for a landing close to where we were. We stopped the truck, hopped out and stood at the ready to make a dash for it as it drifted closer and closer. Fifty feet… thirty feet… twenty feet overhead… whoosh. A wind current took it just about out of our hands high into the sky. In a fraction of a second it was no longer visible leaving us standing by the roadside startled and empty handed.

Mylar balloons are very light and can travel thousands of miles depending on atmospheric conditions. They seem to do best at altitudes between 3,000 and 7,000 feet. Above 7,000 feet they usually explode or gradually lose helium, and drop to the ground. Winds coming from the Pacific Ocean at approximately 6,000 feet carry the balloons to parks like Joshua Tree, Mojave Preserve, and Death Valley.

Balloons are mostly associated with celebrations and other commemorative occasions. Our escapee offered “Congratulations to the new Grad.” But anyone working in parks or public lands has long known that balloons filled with helium quickly lose that festive or commemorative association. Once they take to the sky they become airborne litter. We all know that where there are people there is likely trash decorating the landscape. That’s no surprise. But in remote locations and away from roads, the most frequently found litter is Mylar balloons. Kristin Forgrave, a young bio-technician working in Death Valley, once commented during an animated office discussion, “When people let go of a balloon they think it’ll just fly away. But there is no away.”

Mylar, a trademark of Dupont, Hoechst and Imperial Chemical Industries, is a stretched polyester film specifically developed in the 1950’s for use in NASA’s space program. Although it is regarded as “dirty” in production and “dirty” to dispose of, it has turned out to be a successful product with many uses, balloons being one of them.

For the purpose of manufacturing balloons, a thin metallic coating is applied to the polyester film. Although the industry prefers the name “foil balloon” because of the metallic layer, these party items are commonly referred to as Mylar balloons. The first reference that I could find mentioning commercial use of Mylar balloons was in the seventies when Mylar balloons were designed for a performance by the New York City Ballet.

Mylar balloons are not biodegradable, but over time they disintegrate into tiny shards. Some people feel that the latex or rubber balloons are better to use because they are considered biodegradable. But even those balloons are not innocent. They are treated with ammonia and tetramethyl thiuram disulfide plus zinc oxide and small amounts of plasticizer. The modern version of the rubber balloon is made of polychloroprene and nylon fabric, which is similar to the neoprene material that wet suits are made of. Death Valley’s energetic electrician, Tim Croston, who spends his weekends exploring remote backcountry locations, found forty of those bundled together. He had to let the helium out of most of them to be able to stuff them all into the back of his Jeep.

Balloons not only litter the landscape but they are a serious threat to wildlife. Animals who ingest pieces of balloon or birds who find themselves helplessly tangled in the strings, die a long and painful death. States on the east coast first rang the alarm bell many years ago because balloons released there end up in the ocean. Whales, dolphins, shore birds, and sea turtles were found with balloon material in their stomachs which blocks the digestive system. The website “Balloons Blow” shows many images of unfortunate creatures who paid with their lives for a few moments of human enjoyment.

When they become stuck on electrical wires, Mylar balloons can start wildfires and power outages. Because of their metallic coating they cause wires to short out, sometimes causing the conductors to break and the energized lines fall to the ground. YouTube has some very dramatic footage of a few of those events. Southern California Edison reported some 470 blackouts in 2018 caused by Mylar balloons. Pacific Gas and Electric reported more than 200 incidents resulting in over two million minutes of lost power. The financial loss to utilities and businesses was estimated at more than $120 million annually.

One lineman I spoke with a few months ago, commented that linemen are afraid of Mylar balloons. When Mylar balloons get stuck on the wires they need to remove them as soon as possible.

The use of helium is also problematic. Helium is used for many different purposes including medical and laboratory use. For example helium is used for cooling magnets in MRI machines because it is the element with the lowest boiling point and is non-toxic and non-flammable. It is abundant in the universe but rare on Earth. It cannot be manufactured but is most commonly obtained as a by-product of mining natural gas. Seventy five percent of the world’s helium comes from three places: Texas, Wyoming and Quatar. There are other sources but with lesser amounts of helium mixed in with the natural gas. Currently known sources are being depleted, and new sources have not yet been located.

Perhaps counter-intuitively, for some time now there has been a glut of helium on the market. This has occurred because in 1990 the military started selling off helium that was stockpiled in the 1920’s for use in Zeppelins. The military capped the price in 1996, which meant that helium remained inexpensive and created a false impression of abundance.

A few months ago, Desert Committee member John Hiatt commented that a friend of his who works in a lab, had mentioned that they had been unable to obtain as much helium as they needed. It is abundant no longer.

In 1990, The Balloon Council, based in New Jersey, was formed by manufacturers, wholesalers, distributors, and retailers. Over the past five years approximately one million dollars has been spent on lobbying efforts to stop legislative efforts to regulate balloons.

Meanwhile, back in Death Valley, I noticed some interesting trends. I’ve been picking these things out of creosote bushes and mesquite trees – both undisputed champions in capturing balloons – since I started as a volunteer in 2008. Those of us who traveled the roads and hiked the backcountry, encountered them frequently. However finding bunches of four or six of them was rare. But in the last few years we’ve collected not only bunches of four and six but one of 24, one of 27 and the aforementioned neoprene bundle of 40. We‘re also finding larger sized balloons. One large balloon had a little Styrofoam installation with a battery and a button you could push so that it played a little song. Most popular is the Happy Birthday balloon. But we also receive a considerable influx of balloons after Valentine’s Day and Mother’s Day. Sad to think that a cheerful bright-red heart shaped balloon with the message “I love you” could end up killing a tortoise in a most painful way.

In January 2018, I initiated a park-wide survey asking staff to collect Mylar balloons and report their locations to get an idea of how widespread the problem is in the park. We ran the survey until mid-April 2018 but decided to continue gathering data after that. To date we’ve collected close to 900 balloons or reported locations. In the fall of 2018 we initiated a research project to document balloons in fourteen randomly located plots within the Park, each 300 meters by 300 meters. No results are available yet.

Interpretive Ranger Em Hoerner also became involved with the project and engaged park visitors raising awareness via social media and exhibits in the visitor center. The most frequently heard response from visitors and staff alike: “I had no idea. I never thought of balloons as a problem.”

The effort to raise public awareness will be ongoing. My hope is that others in parks and public lands will join us to educate people regarding the issues with balloons.

And that escapee that I described earlier? I found it later that day along CA Highway 190 as I was returning to Furnace Creek. Well, at least I think it was the same one; it had the same coloring, pattern, and message. Perhaps it didn’t get away after all…