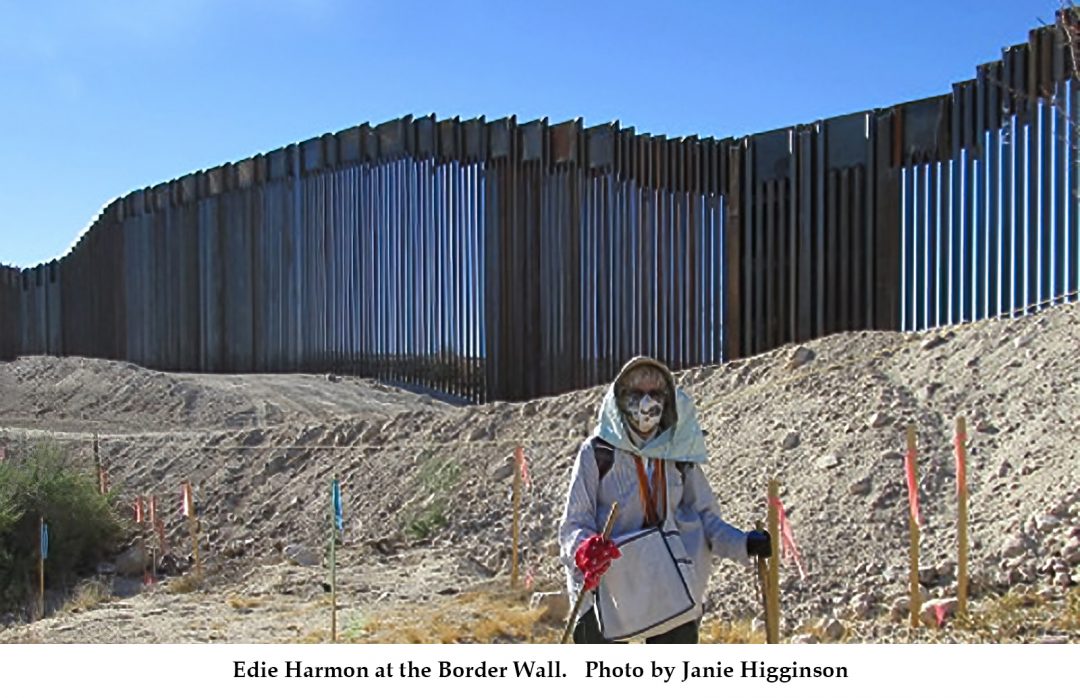 One Citizen can Make a Difference by Nick Ervin

He is gone. Yet his legacy, in all too many regrettable ways, persists. Donald Trump is now a private citizen, but the consequences of his four year assault on America’s environment live on to haunt us.

The destruction has occurred at so many levels and can be illustrated by a single overarching issue: the border wall with Mexico. You have the racist overtones of his rhetoric and policy; the suffering of refugees inside Mexico at the border; corruption in contracting rules and procedures; lax oversight of the wall construction itself; illegal diversion of funds from mandated Defense Department purposes; the waiver of dozens of respected and longtime protective statutes; the infliction of grievous wounds on national park and wilderness lands; and more.

Readers of the Desert Report were informed of early developments about the border wall in the Jacumba Mountains Wilderness in articles by activist Edie Harmon (June, 2020) and Craig Deutsche (September, 2020). Articles have also been published by the small circulation East County Magazine, the Desert Sun daily newspaper in Palm Springs, and the Imperial County newspaper of record.

It is all too easy to allow the latest headlines to dominate our attention and consciousness. And today’s news stories can obscure a bigger story, a tale of fierce conservation values at work, lonely persistence, and dogged determination over a long time-scale.

Many readers of this publication at least recognize the name of perpetual activist and wilderness advocate Edie Harmon (and her late husband, Jim). I have had the pleasure of knowing Edie over the past thirty years or so. She, Jim, and I worked hard together to help pass the landmark California Desert Protection Act of 1994 which, among many other important things, formally created the Jacumba Mountains Wilderness area near their desert home. For decades, Edie Harmon has been a mainstay of the local Sierra Club chapter and the regional Desert Committee on issues large or small pertaining to or affecting our precious desert lands.

No one on earth, I daresay, has known or understood the Imperial County desert landscape, physical and political, like the Harmons. From their home base adjoining open public land five or six miles southeast of the tiny unincorporated community of Ocotillo, this amazing couple developed a profound and visceral feel for their home landscape. They combined that intimate knowledge with political savvy to become a real force in desert conservation both in their local area as well as in the entire California desert. Over many years in deeply conservative Imperial County, she and Jim waged often lonely battles for conservation initiatives. They demonstrated real grit in repeatedly facing off against business-friendly county officials and complacent Bureau of Land Management officialdom. Often quite unglamorous, their efforts frequently bore fruit.

For instance, the Harmons and attorney Larry Silver were the key players in the prolonged and bitter twenty year litigation against U. S. Gypsum that changed the rules on scarce groundwater use in the desert. Essentially, through self-education and deep study, Edie became a recognized expert on groundwater law in California in order to be an effective conservation advocate in the case. The complexity and difficulty of the legal issues involved were almost unfathomable and largely, therefore, unheralded by all but a few experts. The impact, however, on local groundwater use and the larger underlying legal framework in California, has been enormous. Just the patience involved over the twenty year battle bespeaks epic determination.

As Jim’s health declined in the early 2000s, Edie spearheaded the crusade that stopped the Wind Zero development project (a paramilitary training facility disguised as a recreation site) proposed for the nearby township of Ocotillo. She spent countless hours delving into SEC filings that uncovered the shaky finances behind the project. Plus she lobbied local residents and organized the opposition in that otherwise poor community.
Most famously perhaps, Edie was of paramount importance in killing off a proposal by a multinational mining corporation (Glamis Gold) for a massive cyanide heap-leach gold mine at Indian Pass in eastern Imperial County. Once again, this remarkable woman seized the moment, educated herself thoroughly on the sometimes arcane legal issues, and brought together a coalition of Indian tribes, conservation activists, and legal fire power. Many a night was spent camping out near Indian Pass around a campfire, building a coalition and a strategy. Given the influence of the 1872 Mining Law, many observers believed it was impossible to stop such a mining operation on public land. That fight was a many years-long effort that survived multiple court challenges by the powerful mining concern all the way up to the international NAFTA Tribunal. Clearly, it set important and wide-ranging legal precedent.

If that were not enough, her efforts battling the giant Mesquite Mine over the years are the stuff of legend. The site of the former mine was planned to take tons of garbage everyday from the Los Angeles area using rail and large dump trucks for transport. Edie’s major efforts set up an eventual settlement which generated five million dollars for desert conservation efforts.

Although ultimately unsuccessful, Edie assisted in opposing a huge and ill-advised wind farm project adjacent to the southern border of Anza-Borrego Desert State Park. The list of her many accomplishments could easily go on. Many involved intense work gradually cultivating relationships with sympathetic local BLM officials, Border Patrol agents, and local county officials. This kind of foundation-setting work seldom pays immediate dividends and also seldom makes for stories in the press. But such a methodical strategy is vital to making impacts on local land use policy and decisions.
In furthering a tradition of service, this remarkable woman has spent literally hundreds of hours in the last year exploring and documenting border wall construction in the Jacumba Mountains at Skull and Davies valleys. It has been a herculean effort with no shortage of risk, both mental and physical. Of necessity, it has required Edie to make many solitary hikes that start even before the sun is up in the morning. At times she has pushed the boundaries of her physical abilities to get information and take photographs. She has bombarded often indifferent bureaucrats with requests and demands for restorative action as well as improved transparency and timely information.

Essentially, the story of the Jacumba Mountains and its new border wall is the tale, writ large, of government malfeasance, indifference and corruption, as well as cultural and ethnic callousness. Many of the issues reported previously in the media remain largely unchanged except in severity and scope: ruination of habitat for an endangered local desert bighorn sheep herd and of a rare plant assemblage of Crucifixion Thorn; spendthrift waste of precious groundwater from a federally designated Sole Source Aquifer; massive alteration of the landscape disrupting water flow; the absolute tone deafness of responsible federal and county agencies (but not all of the individuals therein) to the pleas of conservationists for more timely information and transparency, et al. Added to the above are newer worries uncovered during the last six months. After much scouting, a surprisingly dense network of ancient foot trails in Skull and Davies valleys was discovered (often with fresh vehicle tracks overlying them). Copious numbers of pottery shards have emerged as well, along with other evidence of a long cultural history in the immediate vicinity of wall construction. Through the agency of careful Google Earth examination and ground-truthing, evidence of a large Native American ceremonial circle has been located within the wilderness.

Within this past year, Edie has compiled a veritable mountain of narrative and photographic data derived from her usually solitary sojourns. The incredibly detailed reports alone that she has submitted to the Department of Homeland Security, Army Corps of Engineers, the Border Patrol, and local BLM over the past year take up hundreds of pages. Moreover, she has managed to persuade senior officials to accompany her on foot to the wilderness in order to view the construction damage for themselves. Finally, she has convinced outside journalists to come and see the border wall impacts and write about them.
In the end, this is a hopeful story of brave and assertive American civics in practice. The stark lesson is: protection of our public lands cannot be left to the judgment of elected officials and professional environmental advocates only.

Nick Ervin is a retired counselor and desert rat who has lived in San Diego and explored the local arid lands for over 40 years. From 1995 through 2000 he served on the U. S. Bureau of Land Management’s California Desert District Advisory Council.