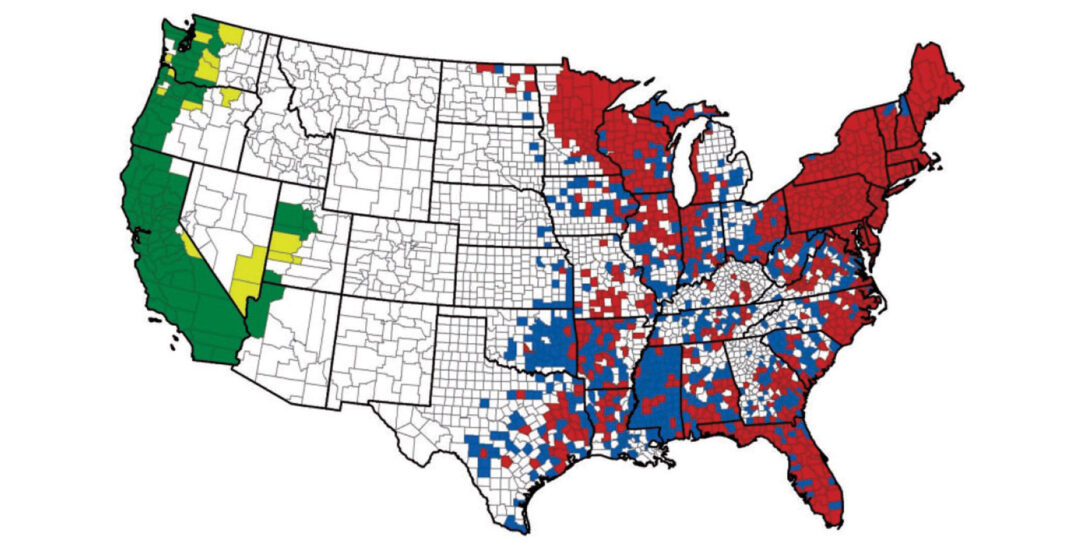 Tick Borne Diseases? Yes, Even In The Deserts

By Edie Harmon   |  There is a popular and incorrect belief that the deserts of the southwest are too hot and dry for ticks to survive. Tick bites and tick-borne infections in Imperial County CA and Mexicali BC prove otherwise1. From documents with links from the California Department of Public Health-Vector Borne Diseases Section, one learns that there are 48 species of ticks established in California2. Eight species “consistently bite” humans in California3. Both Lyme Disease and Rocky Mountain Spotted Fever are transmitted by ticks.

The black-legged ticks in California had been reported as feeding on 108 species of mammals, birds, and lizards2. This species of tick attaches to humans more frequently than other species of ticks, but the rate of infection of Ixodes ticks in Califonria is lower than for others in the eastern and midwestern parts of the country. An infected nymphal tick, the size of a poppy seed, is the one most likely to gift a person with the Borrelia spirochetes which cause Lyme Disease.

Although Lyme disease and all other tick-borne infections are to be reported to California Department of Public Health (CDPH)5 and the CDC, CDPH staff told me that many confirmed cases are never reported. (Author’s own confirmed case was not included as a statistic by CDPH or CDC for either 2008 or 2009 – even after a formal CDC surveillance interview was completed.) The CDC now estimates that there are likely more than 300,000 new cases of Lyme Disease each year in the US and that there are 10-12 times as many new cases of Lyme Disease as are officially reported5.

The Ixodes ticks have four life stages, and the larvae and nymphs feed on small mammals, birds, or lizards for several days, while adult females feed on large or medium size mammals for up to a week. The life cycle can take three years from egg to egg laying females. Because nymphs are about the size of a poppy seed and difficult to see they are often missed. “Any activity that places people in direct contact with shed leaves, fir needles, or wood (eg. Gardening, gathering firewood, picnicking, sitting on logs or against tree trunks, and woodcutting) may increase one’s risk of encountering nymphs and possibly contracting Lyme disease.13” By contrast, the I. pacificus adults are commonly encountered by humans in open grassland or chaparral, along the margins of trails (especially the uphill vegetative borders of hillside hiking trails) in parklands and wildlands, in semirural communities, and in some suburban areas that support populations of deer and other wildlife, small mammals and ground-feeding birds.

When a tick bites, it excretes digestive enzymes and anticoagulants into blood vessels where pathogens including bacteria, viruses, or protozoa may be introduced. If bitten by a spirochete infected tick, a slowly expanding reddish rash (“erythema migrans”) may occur in up to 60% of patients8. However, most people do not feel the tick bite, and if bitten in a place that is not easily seen, any rash is likely to go unnoticed. Symptoms of infection with the spirochetes are fatigue, flu-like symptoms, fever, chills, headache and painful stiff neck. There has been research suggesting that pathogens can get from tick into persons in as little as ten minutes, but some ticks may remain attached for 2-3 days. The longer the time of attachment, the greater the potential for transmission of pathogens.

CDPH 2011 brochure6 under “Diagnosis and Treatment” at page 2 states that:

“A physician diagnoses Lyme disease based on symptoms. Additional information useful to physician in making a diagnosis of Lyme Disease include: Patient had a tick bite or was in an area where ticks occur. Because ticks are small, some people do not notice that they have been bitten. Blood tests [may be useful], but these need to be interpreted carefully. Prompt treatment with antibiotics during early Lyme Disease can cure the infection and prevent complications of late Lyme Disease. If treatment is delayed, treatment can be difficult and recovery may take longer.”

This 2011 brochure include an excellent list of symptoms of different stages of Lyme disease and a list of other diseases carried by black-legged and other  ticks in CA.

At the 2016 annual Columbia College of Physicians and Surgeons-Lyme Disease Association research meeting in Minnesota, Dr. Beard of the CDC confirmed that a large rash five centimeters in diameter around an attached tick positively indicates Lyme Disease and treatment should start without waiting for any laboratory results. Lab results are notoriously unreliable, especially if done early, and early treatment has the greatest chance for success if started immediately. Those with clinical symptoms after a tick bite should be treated even if tests are negative.

The CDC in its 2017 Lyme Disease Case definition7 indicates that beyond an initial rash, untreated disease can, in time,  lead to a number of very serious  conditions with dermatologic, rheumatologic, neurologic, and cardiac abnormalities.”  Doxycycline is one of several antibiotics that can be used to treat Lyme Disease spirochetes. It is also the antibiotic of choice for treating some other tick-borne infections such as Rocky Mt Spotted Fever and is relatively free of adverse reactions and side effects.

There are several species of ticks that are vectors for Rocky Mountain Spotted Fever (Rickettsia rickettsii). Pacific Coast Tick (Dermacentor occidentalis) and the American Dog Tick (Dermacentor variabilis) can be vectors for this as well as for several other less commonly known diseases. These two are responsible for most RMSF cases in California8. The Brown Dog Tick (Rhipicephalus sanguineus) appears to be the primary vector of RMSF elsewhere in the southwest. It is the tick responsible for the on-going outbreak of RMSF that began in 2008 in Mexicali BC8, and it may also be responsible for RMSF in Imperial County in 2014 and 2015. Early treatment of any desert tick bite is essential if one does not know what kind of tick it is. Delay in starting antibiotic treatment could result in a fatal outcome. “Antibacterial treatment should never be delayed while awaiting laboratory confirmation of rickettsial illness, nor should treatment be discontinued solely on the basis of a negative test result with an acute phase specimen9.” Early lab tests are unreliable3.

“RMSF is rapidly fatal, growing in incidence, is transmitted by several species of ticks, and is difficult to diagnose.” (CDC) There is a ‘race against time’ when treating RMSF. Doxycycline is treatment of choice in all ages. Patients treated after the fifth day of illness are more likely to die than those treated earlier in the course of illness9. A 2014 report suggests that “Brazilian ticks that carry Rocky Mountain spotted fever passed the disease to animal hosts in as little as 10 minutes if they had recently fed on another animal.” Previously it had been thought that an attachment of 2-10 hours was necessary for transmission. What this might mean for transmission and attachment time at various locations in California or in adjacent Mexicali is uncertain.

The author’s own experiences with tick bites in the desert will hopefully alert others that ticks and tick-borne infections in desert locations should be taken seriously. Understand that ticks have been well documented on migratory and ground feeding birds in addition to being on small mammals and rabbits in the desert. Vegetative litter is potential habitat for hosts and vectors.

Edie Harmon has lived in the desert in Imperial County for almost 40 years. Her interest in ticks and tick-borne diseases is the result of being gifted with Lyme Disease from two tick bites following a meeting in San Luis Obispo in 2008 and later testing positive for RMSF in 2015 after a tick bite in Imperial County. Each year since 2008, she has attended 5 to 9 days of professional meetings related to tick ecology, diagnosis, and treatments of tick borne illnesses. She still gardens and hikes, but no longer sits on the ground or logs.