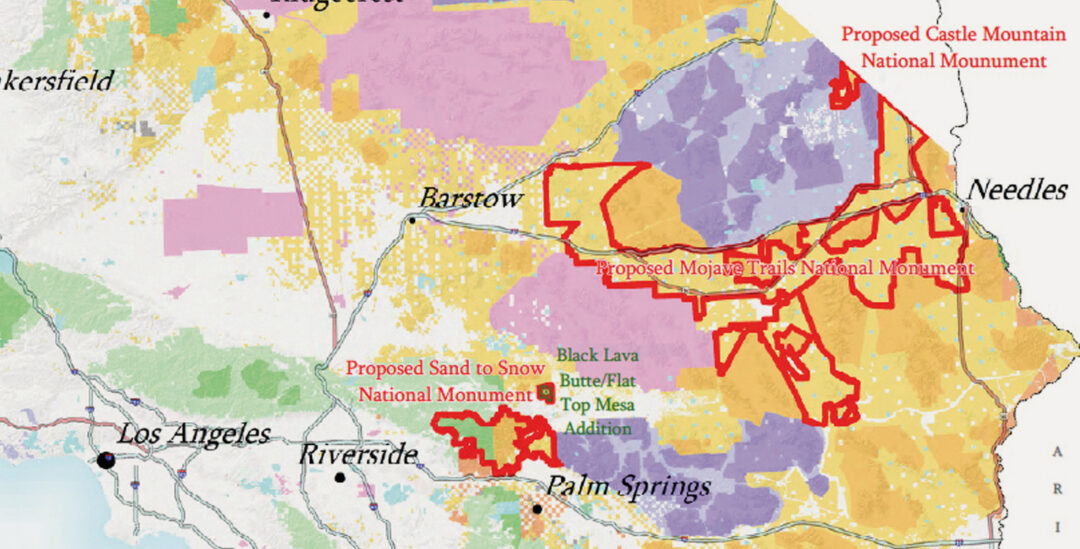 The Joshua tree savannas of the Castle Mountains were originally omitted from the Mojave National Preserve when it was established because of an operating gold mine. Now 20,920 acres will be added back to a more protected status, managed by both the National Park Service and Bureau of Land Management (BLM). The 1.6 million acres included in the Mojave Trails National Monument will be managed by the BLM, and the 154,000-acre Sand to Snow National Monument will be managed jointly by the BLM and the U.S. Forest Service.

Map above: Proposed boundaries of the three new national monuments.

In the past, all three monuments have had large-scale renewable energy projects proposed within their borders, and desert advocates are appreciative of the protection that that has now been given to these landscapes. Still, the work is not complete. Areas within the monuments need to be managed properly, their borders and buffers need to be protected from other large-scale renewable energy threats, and the rest of the California Desert should also be considered for conservation and protection. Following are a sampling of some issues facing the monuments and the deserts in general.

Desert Renewable Energy Conservation Plan (DRECP)
The multi-agency plan will affect 9.8 million acres of public lands in California. It will identify lands for potential renewable energy development and other lands for conservation. Under all action alternatives in the DRECP, the BLM lands within the national monuments are mostly within existing or proposed conservation allocations, including National Landscape Conservation lands and Areas of Critical Environmental Concern. But inconsistencies remain, such as special recreation management areas and open off-highway vehicle areas still shown in DRECP alternatives that are now part of the new monuments. These designations should be removed from the DRECP, and the plan should be updated to reflect the new monuments.

Mining and groundwater
As established by the proclamations, the monuments are subject to valid existing rights. There is no current mining activity in the 20,920-acre Castle Mountains National Monument, but it surrounds an 8,340 acre parcel referred to as the Castle Mountain Mine Area. This consists of BLM-managed federal land, state land, and private land, where NewCastle Gold, Inc., a Canadian mining company, has conducted an exploration drilling program. Any new mining operations would have to be authorized in accordance with applicable federal and state law. The monument proclamation directs that after any such mining and reclamation are completed, or after ten years if no mining occurs, the federal land in the Castle Mountain Mine Area is to be transferred to the National Park Service.

The President also specified that for Castle Mountains and Mojave Trails the Department of Interior should protect the groundwater resources for monument purposes. An ongoing groundwater-banking proposal, the Cadiz Water Project, could now be in conflict with this guidance within Mojave Trails Monument.

Rep. Paul Cook (R-Yucca Valley) continues to push his competing bill through Congress, the California Minerals, Off-Road Recreation, and Conservation Act of 2015. If passed, it would allow new mining claims and expanded off-road vehicle areas, and make Mojave Trails a less-restrictive special management area instead of a monument.

Development threats to the boundaries of the monuments
Large-scale renewable energy projects have been proposed and are upcoming around the boundaries of the new monuments. Crescent Peak Wind Project is a recent proposal that lies along the border of the new Castle Mountains National Monument. The wind project would lie on 40,000 acres of BLM land and possibly construct 750-foot-tall giant wind turbine generators. The visual impact on the new monument is obvious.

The Cady Mountains are home to a large bighorn sheep population, and fortunately this area has been included in the Mojave Trails National Monument. Immediately to the west of this and not included in the Monument are an alluvial fan, lava flows, and sand areas that were the site of of a the former large-scale solar project called Calico. This area has Mojave fringe-toed lizard (Uma scoparia) populations as well as rare plant populations, such as white-margined beardtongue (Penstemon albomarginatus), and serves as connectivity for bighorn populations. This bordering desert area should also have a conservation designation to protect it from future renewable energy proposals.

Management Plans
The White House proclamation directed the BLM, National Park Service, and U.S. Forest Service to undertake a monument planning process for each of the three separate monuments, including opportunities for public input according to the requirements of the National Environmental Policy Act and each agency’s planning regulations and policies. Management plans would be implemented within three years. It is important that the public be actively involved in this planning process.

Recreation
A 25-mile stretch of the Pacific Crest Trail falls within in the Sand to Snow Monument. Hiking, camping, mountain biking, horseback riding, backpacking, bird-watching, star-watching, snowshoeing, cross-country skiing, hunting, and fishing will be allowed in all these monuments. Not all these activities are mutually compatible, and questions about their management will need to be worked out.

Funding
The Antiquities Act provides no funding mechanisms. Budgets will need to be made and funds raised to manage the new monuments and must include such important functions as fire protection. Potentially greater public usage may occur under the new designations.

Tourism
Public lands in the California Desert contribute significantly to the regional tourism economy: according to the National Park Service, more than 3.2 million people visited Joshua Tree National Park, Death Valley National Park, and the Mojave National Preserve in 2014, adding $194 million to the economy and supporting over 2,700 jobs. The new national monuments will bring even more attention and more visitors to the area. To accommodate the increased tourism, there will be a need for friends groups, visitor centers, signage, and support for local communities. Along with this there needs to be an effort to bring visitors from a more diverse cross-section of our population. Questions to be answered include: How do we interpret and care for Route 66? Will existing mines in the Hart Mining District eventually be closed and their history explained to visitors? How will bird-watchers continue to enjoy the dense green cottonwood groves of Big Morongo Canyon?

Local community and stakeholder outreach.
The numerous residents, businesses, towns, and local governments that helped support the idea for the monuments should continue to be engaged and their input sought in how best to manage these lands.

Visual Resources
The Presidential Proclamation says of Castle Mountains National Monument: “Views from Hart Peak encompass a vast wilderness and distinctive peaks, including Spirit Mountain in Nevada, a sacred site to many Native American tribes. The remoteness of the Castle Mountains area offers visitors the chance to experience the solitude of the desert and its increasingly rare natural soundscapes and dark night skies.” These views should be carefully maintained and dark skies kept optimal for star-watching.

Transmission
The Mojave Trails proclamation allows new rights of way across the Monument for certain purposes. The designation explicitly does not preclude the use and maintenance of transmission and utility rights-of-way but stipulates that such uses shall be managed in a manner consistent with the care and management of monument objects. Large new towering transmission lines crossing these wild and historic lands would be inconsistent with the values of desert protection.

Conserving the other wildlands of the Mojave and Colorado Deserts
Lastly, but of equal significance, there are other areas of the original California Desert Conservation Area deserving protection. These are valuable for their their relatively intact and scenic desert landscapes, for their biodiversity, for habitat connectivity, for cultural and historical resources, and for the quality of life they provide to small, nearby communities. Many of these areas, as well as others in Nevada, would be well served as National Monuments, Wilderness Areas, or as Wild and Scenic Rivers.

The California Desert has been hit hard with renewable energy development. Planned designations such as Development Focus Areas, Unallocated Lands, Solar Energy Zones, and Wind Resource Areas still cover vast swaths of desert lands. Regions such as the West Mojave, Antelope Valley, Chuckwalla Valley, and Imperial Valley have taken the brunt of development but have equally diverse and treasured landscapes worthy of protection. Questions of how National Conservation Lands will be managed in perpetuity remain. There are plenty of untapped locations for distributed generation ofrenewable energy such as urban rooftops, parking lots, and brownfields near load centers that are truly the “smart from the start” places to site renewable energy. Additionally, energy efficiency programs can be better implemented. We do not need to develop more desert wildlands. The work of protecting the unique California and Nevada Deserts continues.

Laura Cunningham is Executive Director and Co-founder of Basin & Range Watch, a 501(c)3 nonprofit organization dedicated to conservation of the Mojave, Colorado, and Great Basin Deserts. She has worked in the field of wildlife and fishery biology and is author of A State of Change: Forgotten Landscapes of California (Heyday, 2010).

For those who are interested in the exact wording of the proclamations, these are available at the following websites.