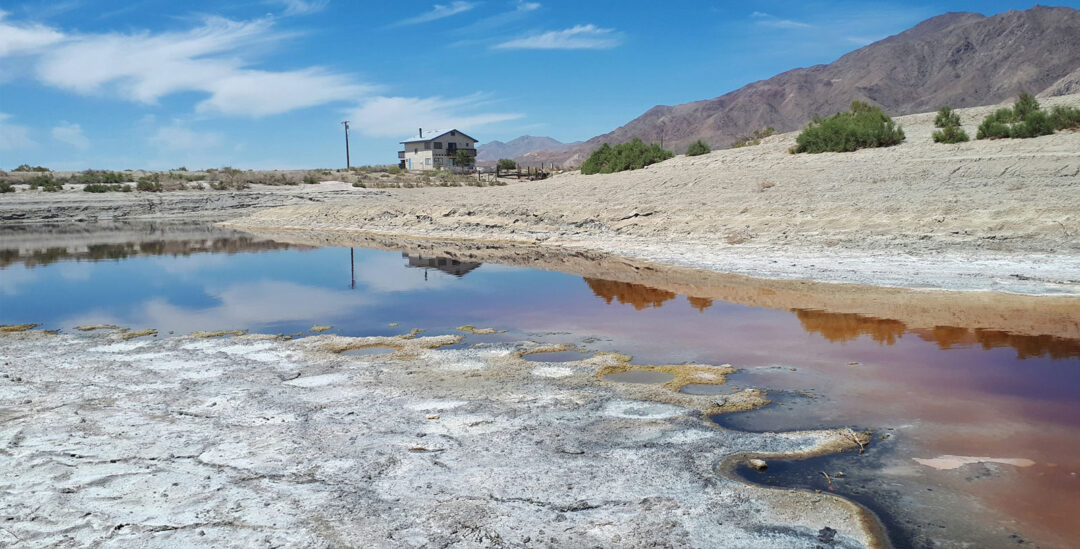 By Kerry Morrison   |   We have come to invite you to join us, to just add water to our communities at the Salton Sea. Instead of death in dry browns and reds, life in wet blues and greens. These truths exist at every scale.

Since our founding of The EcoMedia Compass and Save Our Sea! Campaign at the Salton Sea in 2011, we have witnessed big plans come and go. Looking back through the decades, the public has seen the Californian government fabricate whatever explanations they could after spending hundreds of millions of tax dollars on only studies and legal fees. To the eyes of a withering human or bird on the shore, it’s gotten far worse with nothing to show. One of the few resilient wetlands at the Salton Sea, though, is located in the south end of the Sea between Red Hill Marina and the mud pots. It was reportedly created by duck hunters armed with cement chunks, carpet rolls, shovels, and beer over a few hot weeks after they realized their abundant hunting grounds would quickly dry up without physical intervention. It’s birdy, beautiful, and one of the few places on 100 miles of shoreline you can still simply use a trailered boat launch.

Respiratory and other unseen illnesses are on the steep upturn, while sell-ability and financing options are becoming ever more challenging for locals who bought into their piece of the American Dream. We’ve seen the water in the silted residential canals of Desert Shores, Salton Sea Beach, and Salton City turn from blue to green, to brown, to yellow to brown again and bright red. The formerly swimmable backyard habitat is now just a few inches deep and hyper saline, hosting only bacterial and invertebrate life. Docks are bent and broken, and stinging, stinky, salty dust sweeps up from the channels. Homeowners now rejoice when occasional birds mistake their yards for inviting.

As former Mayor of the West Shores (Salton City, Vista del Mar, Salton Sea Beach, and Desert Shores), I’ve seen many businesses and dreams shuttered. None of the state-sponsored projects in planning or litigation had been designed where any people actually live, and we have seen major degradation in quality of life for so many residents and businesses after the 2003-2021 QSA water transfers that continue to grow annually.

Shoreline residents, The EcoMedia Compass, and Agess Inc., have spent over three years as volunteers organizing the West Shores Restoration Project at Desert Shores. It is our goal to refill the canals along our shoreline that have become useless eyesores. We even built a monster-pump-boat named Poseidon, but a more permanent option was needed to bring water back into the drying canals. Our area on the Northwest Shore of Salton Sea bordering Torres-Martines tribal land has also been called: The Keys, The Fingers, or The Harbor Project.

We have acquired the land and permissions needed to build a berm at 3713 Capri Road at Desert Shores. The berm will serve to hold water in the canals rather than letting it drain back into the receding Salton Sea.

Imperial Irrigation District certainly took their time, but did something quite amicable by the donation of 1/2 an acre to our 501c3 non-profit for the location of the berm. We agreed to never sell it for a profit, but instead build a project and a space that will benefit the community and wildlife. With the water level of the main body of Salton Sea dropping so quickly, it no longer makes sense to simply dredge out harbors or canal communities. To physically heal and revive these communities, water must be pumped in, held, and recirculated.

The California Natural Resources Agency (CNRA) has been the State’s main organizational involvement over the last few years. It has agreed to fund, build, and complete Phase 1 of the West Shores Restoration Project at Desert Shores in collaboration with other agencies. Our volunteer team has been told by the State and Imperial County to halt our engineering and permitting efforts as more funded and organized governmental agencies take over. We are quite excited, but know that watchdogs, organizers, and cheerleaders are still much-needed.

1. Determine how the 28 acres of existing, residential land and home-lined canals will be maintained with a sustainable fill of water at the project site for at least thirty years.

2. Create a floating or fixed pumping system, utilizing renewable power, to bring water in from the main body of the Salton Sea, and providing for conveyance, sufficient outflow, and aeration.

3. Install a reusable (GeoTube-style fillable bladder) berm – which could operate restoring our community as-is, or someday be turned or moved to connect to the main body of the Sea again to open up the navigable waterway.

It has taken many regular community-organizing and political meetings to keep this in the spotlight, but it is starting to really move. Other groups and agencies are getting involved too. This is a project that sits as “the lowest hanging fruit” with some of the sweetest immediate benefits to the region. It can also act as a template for other drying shorelines at the Salton Sea.

Imperial County has drafted a Memorandum of Understanding for the build-financing protocol, and it’s now back to CNRA’s new staff members for legal deliberations. With any reasonable effort by the State, Phase 1 of the project to refill the canals at Desert Shores with seawater will be completed this year. The actual construction should take less than a week once they set a tractor on the beach.

This leads our groups to Phase 2, which includes organizing and designing the systems that will improve water quality and lower the salinity level for the entire Salton Sea. In a landscape so impacted by massive, controversial infrastructure decisions and changing climate, the need for this will likely continue to grow with each passing year. We envision much more than one canal community refilled. This project can be replicated to other existing locations, and it can be an example of what long term restoration can mean. If we ensure a sustainable water supply for future generations, there are countless options for restoration and revitalization, habitat, and homes. Restoration, sustainability, and renewable energy production brings long-term jobs, businesses, tourism and economic vitality. I still believe this place holds every reason to become California’s Green New Deal.

Seawater import flowing downhill 230 feet from the ocean could do this on a much larger scale. The Coyote Canal in Mexico already exists for close to half the distance required from the ocean. Mexico’s relevant landowners, the Cucapa Tribe, and local ranchers, as well as many political leaders and agency heads have expressed that they are quite willing to work with the US and California governments if we can get organized and beyond untested political assumptions. Environmental concerns should be more persuasive than invisible political lines. There are already about fifty power and water crossings between the two countries, and it has become clear to me that there would be great benefits for both nations. There are lucrative markets for salt, and renewably-powered desalination on whatever scale can provide solutions to our waining water supplies. Fresh water then becomes a renewable resource in the Southwest.

Other projects that have been gaining ground in recent years are the State’s 10-Year Plan, the North Lake, and the Perimeter Lake plan. All of these have the ability to flourish and compliment each other if there is enough water.

We continue to bring many local residents and volunteers out to see the ground zero and help in planning for community restoration initiatives, as well as host annual Earth Day, community arts, and science events in the area. This year we are planning for noon on Saturday, April 25th at the 3713 Capri Lane site in Desert Shore. . . You’re invited. Bring shovels.

There is no one-piece answer to all of the challenges in the Imperial Valley and Salton Sea region, but we believe that a sustainable water supply gives us the best tools for economic and environmental stability for generations to come. We need to plan far, far ahead of the terms of our next political leaders. We need to build what will outlive us, and Desert Shores is a great way to start. By planning for longevity, and driving with camaraderie and action, together we can definitely still Save Our Sea!

Want to learn more about the project, support or get involved? Please visit: www.ecomediacompass.org