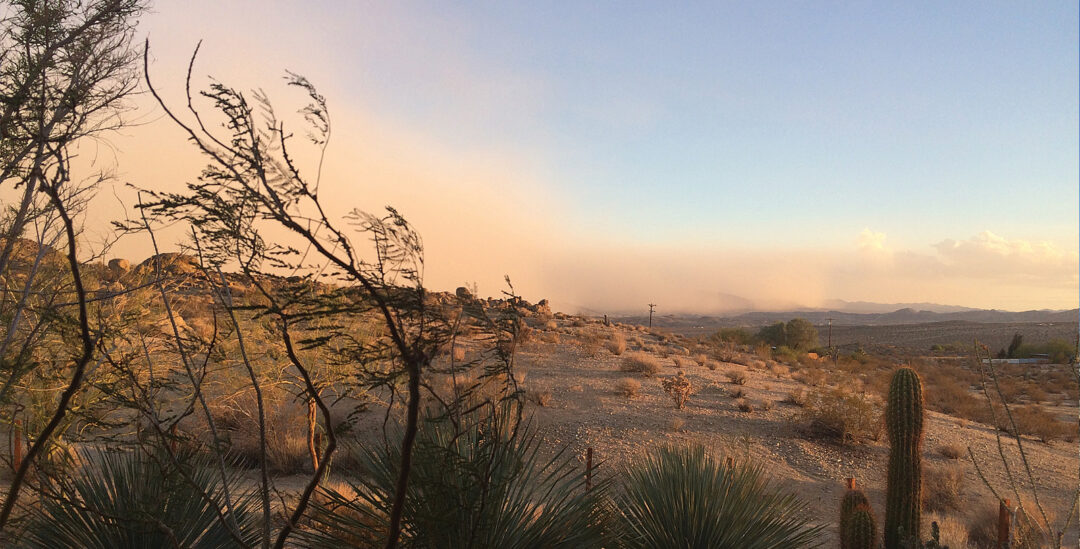 by Pat Flanagan   |   I live in the Morongo Basin community of Desert Heights on top of a Sand Transport Path (STP). This geologic feature is a wind-driven sand deposit over 140 miles long that begins at Emerson Dry Lake in the 29 Palms Marine Base, twenty-three miles north of the Sunfair community in the Joshua Tree basin. At Twentynine Palms Highway the STP turns east, passing through Twentynine Palms and Wonder Valley, flowing over playas, dune fields, and between mountain ranges while crossing the Mojave Desert to the Mule Mountains near Mesa Verde and the Colorado River1 (the blue line in Figure 1). Where the topography inhibits the sand flow, such as at the Bullion and Sheep Hole Mountains, sand ramps form against the mountain slopes, often spilling through the lower passes. This Sand Transport Path, like others in the east Mojave, is stabilized by the omnipresent creosote bush-galleta grass plant community.2 When its tangle of stabilizing roots is removed, the sand and dust become fugitive with the wind. Clones of the long lived creosote bush are scattered throughout the STP, testifying to the length of the sands’ stability in this area.3

It is time that I, my neighbors, and in fact all residents (including students, asthmatics, and the elderly living east of Joshua Tree Basin) start thinking of ourselves in a new way. We are “sensitive receptors.”4 We live downwind of increasingly common fugitive dust that coats our lungs when we breathe, reduces visibility to mere feet when driving, and covers the indoor surfaces of our homes and public buildings.

Windy dusty days are expected in the desert. However, the increasing amount and longevity of events in the past 3-4 years is striking. Since 2013, three solar energy facilities, covering 350 acres, have been constructed in Morongo Basin communities. Construction required 100% grading of the surface and removal of all vegetation. All three emitted dust during construction and continue now, even after operation for 3+ years, to emit dust during high wind events.

Windblown dust, also called fugitive dust and Particulate Matter 10 (PM10 – the 10 refers to the micron size of the particles)5, is considered hazardous to human health and the environment. It is both federally and state regulated. PM10 sources include unpaved roads, construction sites, disturbed areas, and now utility and industrial scale solar sites. It is significant that the Mojave Desert is in non-attainment for PM10 under both federal and state standards.

The Mojave Desert Air Quality Management District (hereafter called the MDAQMD or simply “the District”) monitors air pollutants in compliance with Federal and state laws and standards. Of the six criteria pollutants,6 our interest here is with particulate matter. The District monitors dust emissions and shares responsibility for dust control with local governments. Geographically the District covers 20,000 square miles of desert terrain in San Bernardino and Riverside Counties. The urban areas of the West Mojave contain over 500,000 persons, while the complicated basin and range topography of the East Mojave is sparsely populated. The District’s six air quality monitoring stations are located in Trona, Lancaster, Victorville, Phelan, Lucerne Valley, and Twentynine Palms (Figure 2).

When estimating dust emissions for construction projects, county planners rely on the District’s directive to use the Victorville station’s readings and meteorological data for long term ambient baseline measurements. Calculated emission estimates7 guide the mitigation plans designed to protect the affected population from fugitive dust. The Victorville station is located on asphalt and is 300 feet from a road with an average annual daily traffic count of 1000 vehicles. The station monitors a 0.3 to 3.5 square mile area with a relatively uniform land use.8 Victorville’s monitoring records show zero (0.0) days above the 24-hour federal and state PM10 standards.9 Emission readings, for an area 72 miles north of the Sand Transport Path, with different wind speeds and directions, is not a valid long term PM10 baseline for the Morongo Basin.10

Fugitive dust control plans are regulated by the District’s Rule 403.211 adopted in 1996. Plan requirements include repeated watering to keep soils moist, and that construction stops when winds exceed twenty-five mph. Chemical stabilization and/or a gravel covering for dust control are now recommended for new solar sites. However, research to support guidance on the proven safety and effectiveness of these measures is not provided with the Rule. Without a monitoring station in the STP, the District’s office depends on residents to report violations. Experience indicates that relying on neighbor alerts from our rural area is not a proven, effective strategy for monitoring and enforcement of fugitive dust violations.

Under the California Environmental Quality Act (CEQA), the governmental lead agency for a project prepares an Initial Study (IS) to determine the environmental consequences of that project. The IS follows city or county guidelines as well as the state CEQA guidelines. There are eighteen environmental factors with issues to be addressed, including air quality and geology/soils. Each issue is analyzed for potentially significant impacts to the environment. If it is found that a project will not have an effect on the environment, then a “negative declaration” is prepared. If the project could have an effect, but the effect can be mitigated, then a “mitigated negative declaration” is prepared. Or the lead agency can find that the project may have an effect on the environment and require an Environmental Impact Report. Without real time data, ‘could’ always trumps ‘may’ and planners can decide the project will not violate or contribute to an existing or projected air quality standard, and thus check the “less than significant with mitigation” box. Developers prefer not to incur the expense and time of an EIR, which calls for another round of public comments, responses, and findings before the project can be approved or denied by the County Planning Commission and/or Board of Supervisors.

CEQA requires the geology and soils of the proposed project site be studied to determine if the project “will result in substantial soil erosion or the loss of topsoil.” But neither Riverside County, San Bernardino County, nor the District recognize the STP’s as emission sources. The County’s findings for projects detail the controls and regulations for water erosion, which is insignificant in permeable sandy soils. The “less than significant” box is checked only by ignoring the STP.

Preparation of the Initial Study requires that the project’s PM10 emissions be estimated for construction and operation. To forecast emissions, a baseline is necessary. The District directs that the baseline emission should be “the average values from data for two years directly preceding the source’s application… [and] sources lacking specific daily activity records may substitute other records that establish daily PM10 emissions.”12 As shown, there are no monitoring stations to establish the source’s specific daily activities for the previous two years (or any amount of time) along the entire length of the STP.13 The District’s approved monitoring station for substitute records is in Victorville. Without monitoring stations in the Sand Transport Path, it is impossible to establish accurate emission estimates14 that support responsible planning.

In preparation for solar developement on private and public land, the District needs: 1) an updated Dust Control Rule 403.2; 2) evaluation and inclusion of the STPs as emission sources throughout the District; and 3) research that demonstrates the effectiveness of the currently approved dust mitigation measures on large solar sites over time.

The largest of the Desert Renewable Energy Conservation Project’s (DRECP) Development Focus Areas is along the I-10 on the STP. Sand Transport has been studied for two projects off the I-10 but only with respect to preserving habitat for the fringe-toed lizard.15 These studies do not account for fugitive dust emissions. The Desert Renewable Action Team in their Best Management Practices and Guidance Manual recommends that a project on federal land document the local topography and physical parameters of emission sources and use monitoring data from appropriate monitoring sites. If such sites are not available, a meteorological station to collect and document at least one year of data for baseline air quality conditions should be established. Since there are no PM10 monitoring sites east of the Twentynine Palms Marine Base, now is the time to strategically place monitoring stations for real time measurements to support current planning and future enforcement. It can be argued that project developers are the logical source for funding.

In addition to the anticipated fugitive dust rising from planned projects in the District, the nearby shrinking Salton Sea will also add to the region’s PM10 non-attainment status as the playa is further exposed. A perfect dust storm(s) is in the making.

If you see fugitive dust from a solar energy facility in the Mojave Desert AQMD, please report to 1-800-635-4617. There are written forms on their website. Visit the site to become familiar with the District boundaries. http://www.mdaqmd.ca.gov/index.aspx?page=239

Pat Flanagan has been resident in the Mojave Desert since 2002. She represents her Desert Heights community on the Morongo Basin Municipal Advisory Council, is a board member of the Morongo Basin Conservation Association, and is the naturalist for the 29 Palms Inn on the Oasis of Mara.

5) PM2.5 is often listed with PM10 but will not be discussed in this article. PM 2.5 is 2.5 micrometers in diameter or smaller, and can only be seen with an electron microscope. Fine particles are produced by all types of combustion.  https://www.airnow.gov/index.cfm?action=aqibasics.particle

10) The Lucerne Valley and Twentynine Palms stations monitor PM10 but are not used to determine the ambient baseline conditions for Morongo Basin solar projects. Lucerne Valley registers 2.8 days above the National ambient air quality standards. See footnote #7. This would be a better fit for the Morongo Basin baseline until a PM10 air monitoring station is installed in Twentynine Palms or the JTNP Oasis Visitor Center.

13) The monitoring station on the 29 Palms Marine Base measures for PM10 but the District does not use if for baseline calculations because dust rising from Base operations would skew the data.