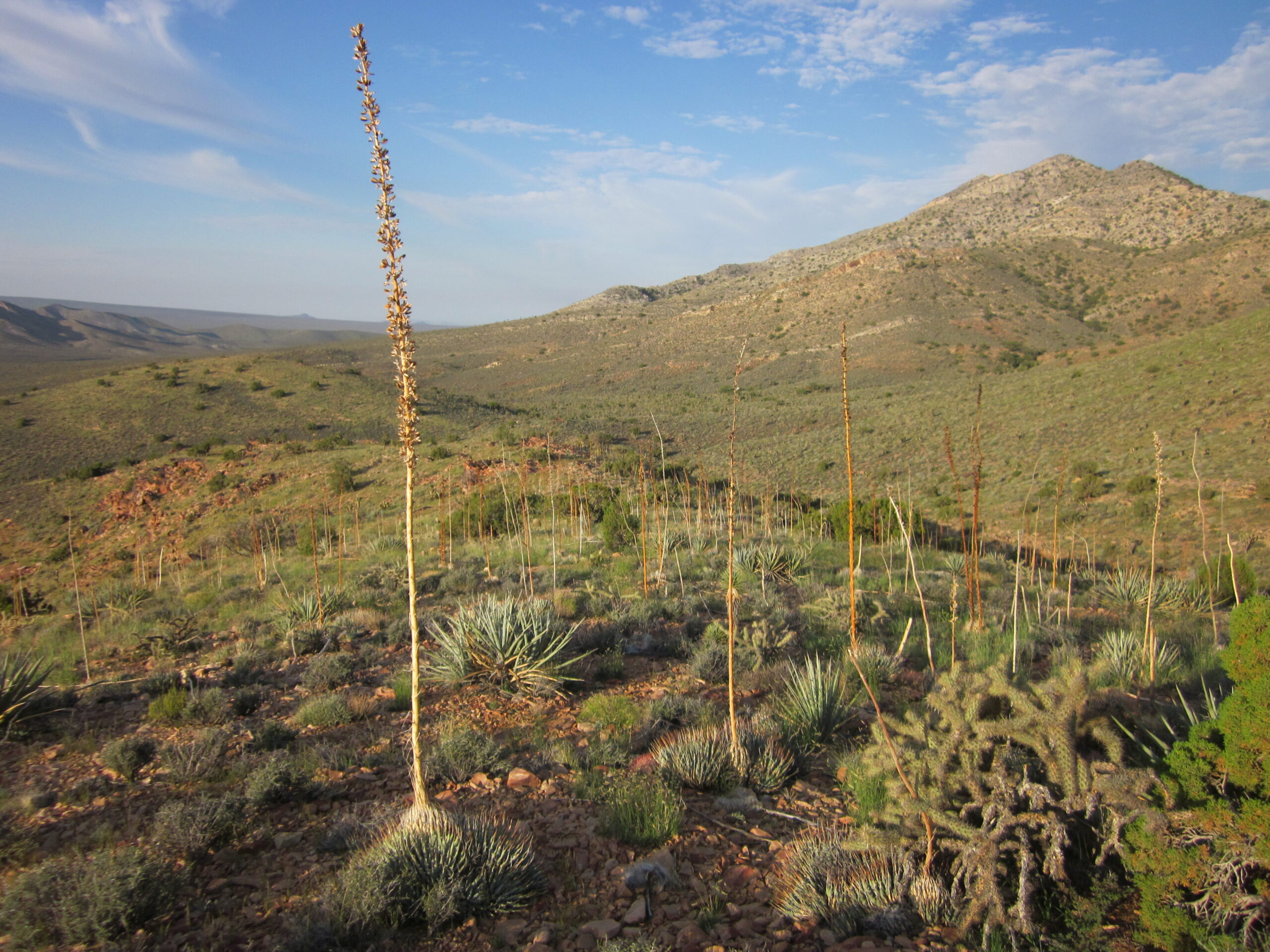 In the previous issue of Desert Report, several locations were mentioned that are truly wild places, under threat from development, that have not yet been designated as wilderness. In this issue, with the focus on locations in the east Mojave, I present a few more.

If you were to ask most people in the state of California to find the Mescal Range on a map, I would guess that 99.9 percent of our state population would not be able to do so. Ironically, thousands of people drive past this range on a daily basis, millions annually on the way to Las Vegas or Los Angeles. Most probably see it as a large limestone rock rising from the desert floor seemingly devoid of life. This is far from the truth. When you travel south from Interstate 15 into this range all traffic noises cease. You leave the modern world behind and everything seems pristine and wild.

The eastern section of this range encompasses the northern section of Piute Valley. In the summer, after the monsoonal rains, this area becomes a unique desert grassland amongst the Joshua tree woodland. It holds many plant rarities such as the bizarre cactus known as dead cholla (Grusonia parishii) and the beautiful and unusual Mohave milkweed (Asclepias nyctaginifolia). This side of the range also holds the only known location in California of fossilized dinosaur tracks. Known as the ‘dinosaur trackway’, these impressions in the localized sandstone outcropping are believed to be 200 million years old and are obviously of great importance.

There is no vehicle access into the interior of this rugged range. Although challenging, the rewards upon entry are great. One has to either walk up the long western drainages or climb up and over the steep rugged eastern limestone ridges to reach their center. Floristically, this range has been highly unexplored. Until quite recently, most of the historic plant collections were from the edges and margins of the range with virtually no recorded plants from its interior. There is at least one plant in the area that is new to science and to date there have been found 30 different rare plant species in this range. Every expedition into its center reveals new and undocumented plant species.

The Mescal Range lies between the better known Clark Mountains and the New York Mountains which are also home to many unique rare plant species and plant assemblages such as some of the last remaining stands of white fir (Abies concolor) in the desert. Further explorations of the Mescal Range may find another area of marooned populations of white fir. Other near endemic plant species that are shared between the Clarks and the New Yorks may be revealed in the future. To date several have already been found, such as dwarf Indian mallow (Abutilon parvulum) and Navajo muhly (Muhlenbergia arsenei) that in California are only known in either the Clark Mountains or New York Mountains.

Sadly, last year while exploring the interior of the Mescal Range, I came across two men with chain saws cutting down the pinyon pines that grow here. I have no idea why, and did not approach these questionable characters with chainsaws in the middle of nowhere to ask.

Large scale mining is also a threat for this range. Just across the highway from the Mescal Range lies the largest rare earth mine in the U.S.A. It would be devastating if this destructive mine where to spill over and expand across the highway.

The area is also a very important animal corridor for wildlife traveling between the Mojave National Preserve to the Clark Mountains and beyond. The Mescal Range is managed by the BLM and its central and eastern sections, at this time, have no form of protection. This area definitely meets all requirements for wilderness designation and needs to be designated as so as soon as possible.

My first trip to the Castle Mountains was a very memorable one. I was there to monitor and make a conservation seed collection of the near endemic pinto beardtoungue (Penstemon bicolor). It was the middle of July and the day saw triple digit temps. There were not very many flowers, but I was fascinated by the area and vowed to return to explore further. That evening while driving out along the little 4-wheel drive road, a roadrunner appeared on the road in front of me. I was only able to drive about 3 MPH on this little road. Instead of running off into the brush the roadrunner continued to run along the road in front of me. It in fact ran in front of me for nearly a mile! Eventually, it darted after a lizard in the shrubbery. I was surrounded by one of the thickest and largest stands of Joshua trees I have ever seen to date. With the sun setting behind them, it was a truly perfect moment.

Since then I have spent countless days, during all seasons, in the Castle Mountains exploring the abundant wildlife that they contain. This mountain range, until recently, was also botanically unexplored. Recent explorations by desert botanist James Andre and myself have turned up a plethora of rare plant species and at least one plant new to the California flora. To date we have found over 30 rare plant species in this range, several of which are near endemics and found only in this part of the Mohave.

If you have not been to the Castle Mountains, you should go. It is best to visit in the late summer after the monsoonal rains. During this time, the valleys at the base of the mountains appear as large grassy savannas. After the rains, hidden among these unique grasslands are flowers that may be seen only at this time of the year. The stands of Joshua trees here are outstanding; even if you are a desert snob, you will still find them more than impressive.

Historically the Castle Mountains have seen a good amount of mining, especially at their southern end. This has not been an issue for some time now, but just recently a large mining claim has been reopened for this range and it seems likely that large scale mining may commence in its southern section. This area is managed by the BLM and has no form of protection what-so-ever. I have heard it strongly stated that this area should be given over to, and managed by, the Mohave National Preserve. Whoever the manager may be, this area fills many requirements for wilderness designation and should be designated so as soon as possible.

Look for more wild places that need wilderness designation in upcoming editions in 2014.

Duncan Bell is a field botanist for Rancho Santa Ana Botanic Garden and spends most of his time doing floristic work in the undercollected and unexplored mountain ranges of Southern California.