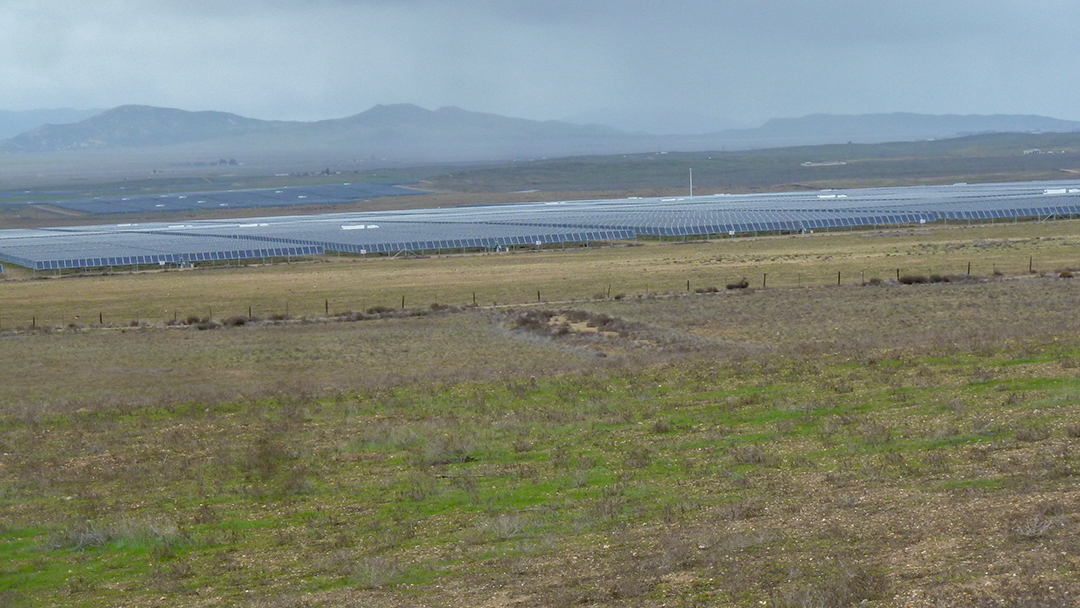 The Desert is Alive

And Large Scale Solar Energy Facilities Are Threatening It

At this point, no one with any sense disputes the reality of climate change. It is happening, it is getting worse, and human society is responsible for it because of our adding incomprehensible amounts of carbon dioxide to the atmosphere over the last two centuries. In order not to make the current humanitarian disaster and mass extinction even worse, we have to stop burning fossil fuels as soon as possible. How can we do this?

The usual answer to that question is through renewable energy sources such as wind, geothermal, and solar. Of these, solar has proven the most feasible energy source for many places. It’s cheap, modular, and scalable. You can generate 500 watts of power or 500 megawatts using the same technology. The sun shines brightly enough to generate power in most places on the planet: even gloomy Germany, with about the same solar power potential as Fairbanks, Alaska, generates a significant percentage of its power from solar.

The problem? Solar takes up a lot of room to generate electricity. The maximum practical amount of solar energy hitting a square meter of the earth’s surface under optimum conditions is a kilowatt per square meter. Photovoltaic panels can convert about 15 percent of that to electricity; sometimes a little more, often considerably less. according to the federal Energy Information Administration, California’s total energy consumption in 2020, including burning of fossil fuels, was the equivalent of 2.028 million megawatt-hours of electrical power.1 To generate that much power from solar panels would require finding 2,383 square miles of land to put them on.

As pressure builds to blunt the worst effects of climate change, pressure will also build to permit wholesale development of solar power in the deserts of the southwest. It makes sense from an engineering standpoint: deserts generally have abundant sunshine and few human neighbors with the desire and resources to object to the building of large industrial projects.

But deserts also hold a wealth of biological diversity, and they are among the most ecologically intact habitats in the world. In California, itself a biological diversity hotspot, deserts are home to a disproportionate share of the state’s plant diversity: 38 percent of the species on just 28 percent of the land. Conversion of desert habitat for solar power generation means the destruction of thousands of acres of this biologically rich desert habitat for each individual project. With deserts newly in the cross-hairs for solar development, it’s worthwhile to look at just how that destruction will affect desert species, and others.

Scraped ground at the Topaz photovoltaic facility in the Carrizo Plain. 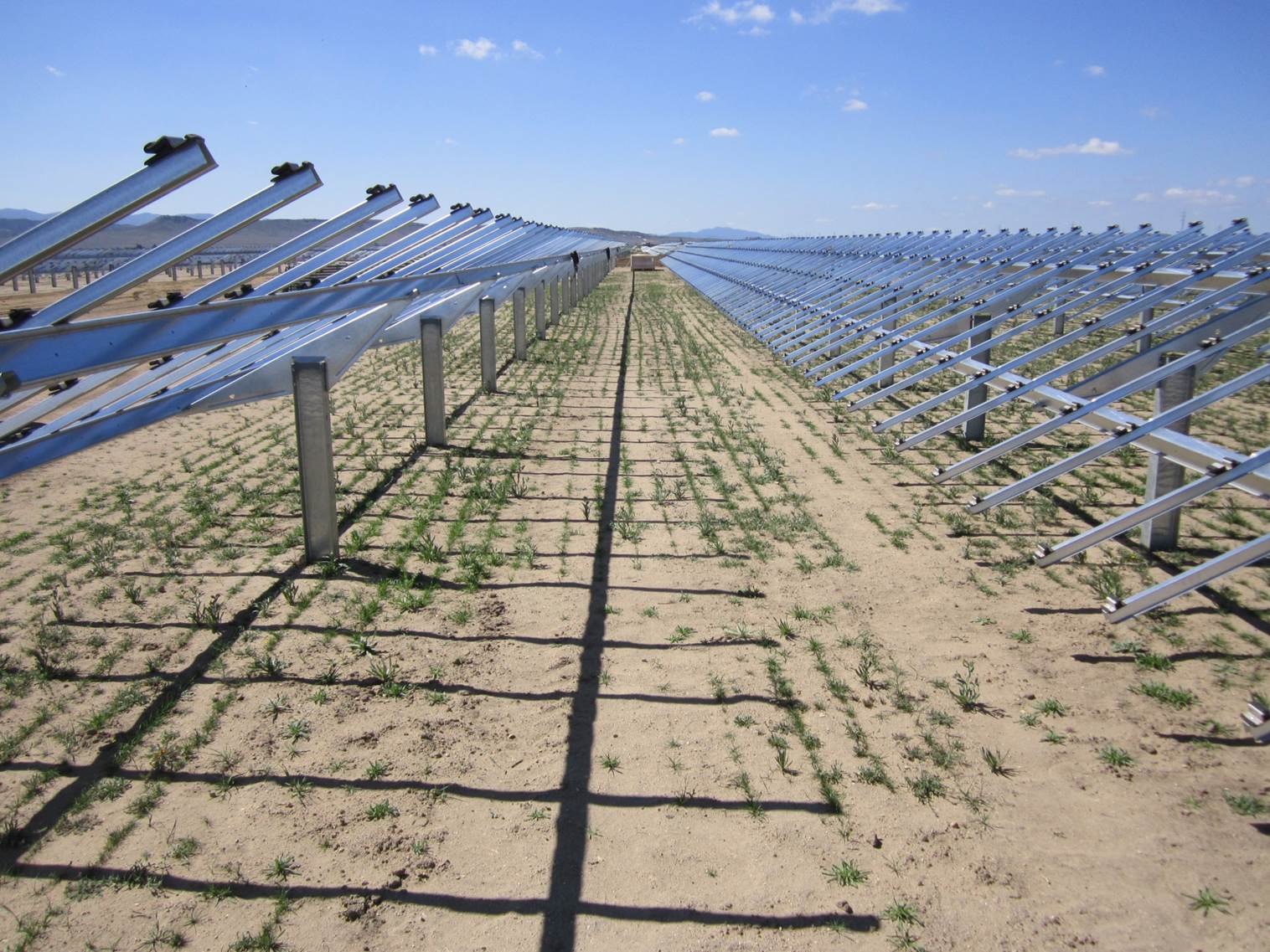 The most direct impact solar development has on desert habitat and the wildlife that calls it home is through direct destruction of that habitat. Though some lip service has been paid to modifying construction techniques to reduce damage to living habitat, such as “mowing” vegetation beneath panels rather than blading it entirely, the fact remains that ecosystems that have evolved to contend with desert conditions do not fare well when even the “gentlest” solar facilities are built on top of them.

A recent example concerns the western Joshua tree, lately the subject of efforts by conservationists to coax a threatened species listing from the state of California. In a report prepared by staff of the California Department of Fish and Wildlife recommending against protection of the species, CDFW cites a survey of eleven solar project applications in the Mojave that it admits would kill a combined 222,073 Joshua trees. A similarly large number of other desert plants such as Mojave yucca, blackbrush, creosote clonal rings, and long-lived cacti are likely to have been threatened by the same plants as well, to say nothing of sensitive communities such as cryptobiotic soil crusts.

Even in areas where solar developers “mow” or “trim” vegetation rather than blading it, survival of the many of the plants forming the basis of the ecosystem is doubtful. Some shrubs, such as creosote and cheesebush, may respond well to periodic pruning. Others will not. My personal observation suggests that facilities with “mown” shrubs often harbor significant populations of invasive plants that were not as prevalent prior to construction.

Further, the mere fact of construction is a hazard to desert species, legally protected or not. Consulting biologists may do a fine job of limiting damage to target species such as tortoises and Mohave ground squirrels, but even the most diligent biologist cannot protect every animal in the path of construction. At times workers for solar companies may actually compound the damage to sensitive species, a likely example being when desert kit foxes near the Genesis Solar project near Ford Dry Lake contracted distemper after NextEra workers used coyote urine to “haze” the foxes away from their burrows.

Perhaps the canonical example of wildlife mortality from solar power generation involves injury to birds from the concentrated solar energy created at power tower style concentrating solar plants. The Ivanpah Solar Electric Generating System adjacent to Mojave National Preserve is the best-known venue for this particular form of wildlife injury. Ivanpah generates electricity by focusing tens of thousands of mirrors onto boilers at the top of three towers, the result being zones around each boiler where the concentrated sunlight – “solar flux” – can cause the moisture inside living things to vaporize immediately. Ivanpah functions as a kind of “ecological trap”: insects are attracted by the bright glow of the boilers and the superheated air around them. Birds that eat insects instinctively head for those lights as well, as do birds that eat small birds, or even just seek out updrafts to gain altitude. Smaller birds, or less-small birds that penetrate into the areas of the strongest flux, literally explode from the pressure of their bodily fluids vaporizing. Others may merely find their feathers signed, itself a mortal injury when desert survival requires flight. Another potential cause of solar-related wildlife mortality is the so-called “lake effect,” in which birds in flight mistake large solar power plants for bodies of water and attempt to land there. Mirrors installed at concentrating solar plants pose an obvious risk of this sort, but even photovoltaic (PV) panels, which do not particularly resemble water to the human eye, may give the false impression of water to birds using polarized light to navigate. Collisions with mirrors and solar panels, along with their support infrastructure, are a significant cause of bird mortality at solar project sites. Even if the birds land uninjured, the mistaken identification may doom them. Many water birds, such as loons and cormorants, need open water to take off again. Stranded in the desert, they usually succumb quickly to thirst and predation.

Lake Effect at the Topaz photovoltaic facility in the Carrizo Plain The North American Deserts are generally characterized by basin and range topography, where mountains rise as tall “islands” surrounded by valleys. In much of the desert, these basins and ranges are oriented in a north-south direction. As the desert warms, wildlife populations – including both animals and plants – will need to move northward to survive.

Solar developers tend to use a very specific type of topography for their projects – land at the bottoms of valleys with a five percent grade or less. In narrow valleys, technologically optimal sites for solar development may occupy the width of a valley, preventing animals that cannot negotiate steeper slopes from migrating northward.

Even if a corridor remains between projects that may technically facilitate migration, connectivity may suffer if – as with some large mammals –  wildlife is reluctant to venture between the fencelines. For species like desert tortoise whose movements are limited to an individual territory, development may hinder gene flow if the remaining corridors are too narrow to provide feasible year-round habitat, eroding the ability of the species to weather climate change.

The whole point of a solar power plant is to absorb sunlight. Some of that energy is turned into electrical power. The rest becomes heat. That heat goes into the surrounding environment. A 2016 study found that photovoltaic power plants surrounded by desert wildlands created a “solar heat island” effect, in which temperatures near the power plant rose by 5.4-7.2°F (3-4°C) over the surrounding open desert.3 That’s a big enough increase to threaten the survival of nearby trees and shrubs already struggling with a hotter, drier desert.

This is not an exhaustive list of potential biological impacts: solar installations also bring with them a raft of threats to wildlife that are shared by many other kinds of development, including night-time light pollution, noise and industrial vibration that damages the hearing of burrowing creatures, importation of invasive plant seeds, predator subsidy, and use of toxic substances not found in nature.

Faced with the reality that converting an area twice the size of Joshua Tree NP to electricity generation will have substantial, potentially catastrophic ecological effects, one might reasonably ask where else we might put those thousands of square miles of solar panels. You could derive a hint from earlier in this article, with the list of cities I used as a land acreage comparison. If we need an area the size of Los Angeles to build solar generating capacity, why not use Los Angeles? Solar on rooftops, on parking lots, on landfills and brownfields and logistics centers in cities throughout California and Nevada would help meet our demand for electricity while posing minimal threat to wild nature. And done right, we could even improve the standards of living for people in those cities.

Chris Clarke is Associate Director of the National Parks Conservation Association's California Desert program, and cohost of the desert protection podcast 90 Miles from Needles. He lives in Twentynine Palms with his wife Lara and their dog Heart.