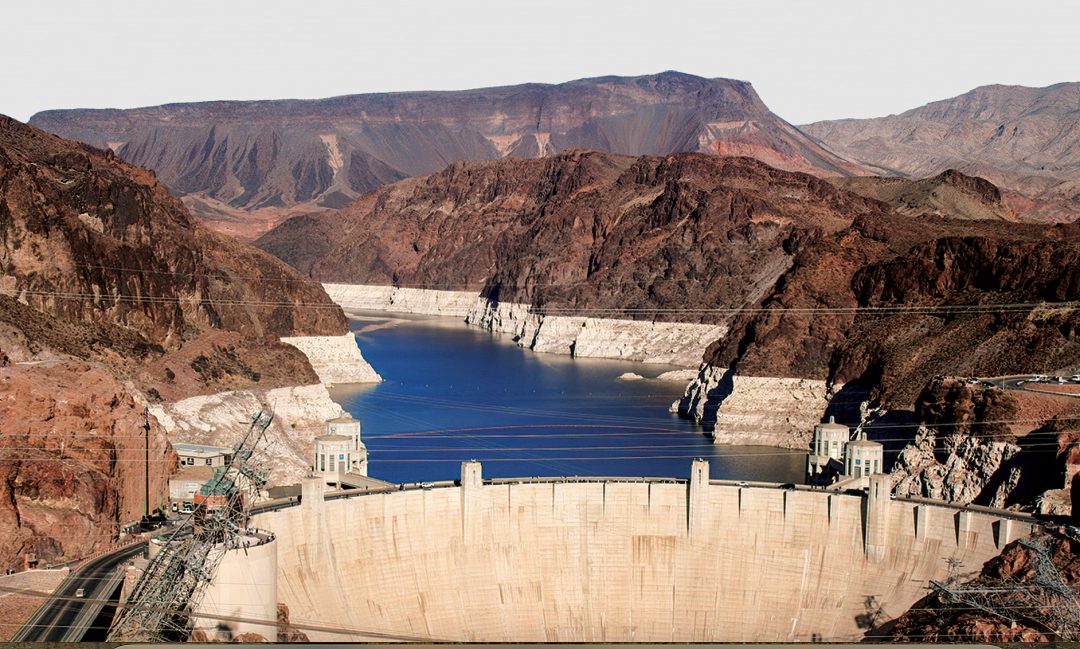 Is it Simply a Water Problem?

Some 40 million people in the western United States depend wholly or in part on the Colorado River for their water supply. After some twenty years of drought or climate change (your choice) Lakes Mead and Powell are down to about 25% of capacity and inflow in 2021 and 2022 is only about 30% of the last 30 years average. The question of the day is: what are the seven states that share the river going to do to bring usage into balance with supply?

While most of the press and people in the Colorado River watershed attribute the problem to drought, that is only part of the problem. The managers of the Southern Nevada Water Authority (SNWA), the agency that manages Nevada’s share of the River have known for decades that this day was coming. No, they were not clairvoyant, but they knew that the river was over-allocated and that demand was increasing. A simple graph of the supply trend vs the usage trend showed that usage would exceed supply by the early 2000s and that once those trend lines crossed the future would be one of shortage.

By 2005, SNWA statisticians noticed that per capita consumption in the Las Vegas valley was undergoing a small but noticeable decrease. Not immediately understanding the cause of this decrease, they termed it ”unintentional conservation.” It turns out that Las Vegas had been growing rapidly for a number of years, and a significant portion of the housing stock had been built under updated plumbing codes, which mandated low flow plumbing fixtures. Also, lot sizes had decreased and new houses were no longer allowed to have grass in their front yards. Hence, “unintentional conservation.” Shortly after that time, the Water Authority instituted a subsidy program to help homeowners replace lawns with water conservation landscaping, sometimes called xeriscaping. As a result of the Water Authority’s conservation efforts, Las Vegas today uses less water than it did twenty years ago while the population has increased by at least 750,000. Yet, the water level in Lake Mead continues to fall. Nevada’s allocation of Colorado River water is only 1.8% of the total, so Nevada’s usage doesn’t really impact the volume of water in Lake Mead.

2002 was an exceedingly dry year in the southwest and the runoff into the Colorado River was only about 25% of so called “normal” that year. The surface level of Lake Mead fell more than 30 feet, and that triggered a chain of events still unfolding today. That dry year and the unprecedented decrease in stored water in Lakes Mead and Powell prompted the US Department of Interior, acting through the Bureau of Reclamation which operates the large dams on the river, to initiate a series of actions to require the states to use no more than their legal allotment of Colorado River water. Prior to that time states could use as much as they wanted so long as the reservoirs were close to full. California, with an allotment of 4.4 million acre-feet per year had been using 5 million acre-feet or more. Another consequence of these actions, collectively called the “Quantification Settlement Agreement” was that the Imperial Irrigation District (IID), the largest single water rights holder on the river, agreed to provide some 320,000 acre-feet of water to San Diego on an annual basis.

Hoover Dam in 2021. The bathtub right above the surface of Lake Mead is visible. The three Landsat photos show the shrinkage of Lake Mead. The left photo was taken in 2000. The successive photos were taken in 2021 and 2022.

The Quantification Settlement Agreement and a subsequent agreement, The Interim Shortage Guidelines, are having impacts that are being felt today and will be far into the future. One of the more visible effects of Quantification Settlement Agreement is the gradual decline in the level of the Salton Sea. This body of water, the largest in California, was created starting in 1905 when flood waters breached the headgate on the Imperial Canal, and the Colorado River was diverted into the Salton Sink for a period of two years. The Sea has persisted because it is the agricultural drain for the Imperial, Mexicali, and Coachella Valleys. The diversion of water from the IID to San Diego caused a decrease in irrigated acreage in the Imperial Valley and consequent reduction in drainage water going to the sea. The Agreement called for 100,000 acre-feet/year of Colorado River water to be diverted to the Salton Sea for ten years with the assumption that during that time a plan to stabilize the Sea would be devised and implemented.

The water diversion to the Sea ended in 2018 with no plan agreed upon for stabilization, nor is one in place today. A consequence of declining inflow to the Salton Sea is a falling water level and exposure and desiccation of the shoreline resulting in an increase in windblown dust in Imperial County. The almost total diversion of the Colorado River for human uses caused the lush Colorado River Delta to dry up thus losing some of the most important bird habitat on the Pacific Coast. The Salton Sea became the next best place for wintering waterfowl and other birds. Now that too is pretty much gone. So, restoring the Salton Sea for both human reasons and wildlife habitat is an important consideration that cannot be ignored and must be part of the ultimate solution. More Colorado River water going into the Salton Sea will almost certainly not be part of the answer.

While Southern Nevada’s water conservation efforts are impressive, and Los Angeles and Phoenix are also working to reduce their water consumption, there has been little discernible impact on the surface elevation of Lake Mead. This is due in large part to the fact that agricultural water use accounts for 70-80% of the water diverted from the Colorado River. Reducing agricultural water use is much more challenging than reducing urban usage. Low flow plumbing fixtures and xeriscaping don’t really cause urban dwellers to significantly change their lifestyle or endure any real inconvenience. On the contrary, asking the agricultural community to significantly reduce their water usage does cause real pain because it results in a direct and almost immediate loss of income. To understand the disconnect between urban and agricultural water use, it is necessary to delve into the history and economics of agriculture in the lower Colorado River basin.

Water rights in the Western U.S., are for the most part, based on the concept of “prior appropriation,” also known as “first in time, first in right.” On that basis the Imperial Valley’s Imperial Irrigation District (IID)has the most senior water rights on the Colorado River, and their senior rights have been upheld by the U.S. Supreme Court. So, the IID and the farm community it serves don’t feel much of an obligation to reduce their water usage. But the IID is not the only player in the agricultural sector. Arizona and Mexico also have large agricultural sectors that depend on Colorado River water. [another paragraph break]

Asking the agricultural community to reduce their water usage by as much as 50% is a heavy lift. Most urbanites think of farmers as just the land owners and managers, but in fact agriculture requires a lot of support personnel. Farm laborers, equipment dealers, mechanics, trucking companies and truck drivers, and all the people that support them are involved. Restricting agricultural water use will cause entire communities to suffer and perhaps cease to exist. In order to equitably reduce consumptive uses of Colorado River water, there needs to be a serious discussion between representatives of the urban water users and the agricultural community to decide how all parties can survive with less water. This almost certainly will have to involve a transfer of money from the urban communities to the agricultural sector so that our entire population can continue to enjoy the food and other products that only agriculture can produce

Farm labor, and by that I mean the large number people who actually do the hard work of farming but who do not own land, may be the most difficult issue to resolve. The availability of farm labor has been a problem for a very long time. Historically, farm labor in California has been performed by immigrants, either first or second generation. The Bracero program, which allowed Mexican citizens to come into the U.S. for specified lengths of time to tend crops was instituted in 1942, partly due to the general labor shortage caused by World War II. The program was terminated in 1964. Prior to September 11, 2001 our southern border with Mexico was relatively open and many Mexicans crossed the border for seasonal, or even daily work, and then returned home. After 9/11 crossing the southern border became more difficult, and laws were implemented to make it much more difficult to employ non-citizens. As a result, the farm labor market tightened considerably, making it less attractive to grow crops that require manual labor.

A side result of the farm labor issue is the destabilization of agricultural communities, such as El Centro and Brawley, in the Imperial Valley, and Yuma in Arizona and numerous communities in northern Baja and Sonora, Mexico. Imperial County has the lowest average income and the highest poverty rate of any county in California. Hence, asking the people of the Imperial Valley to cut their use of Colorado River water is asking them to endure real economic hardship. Understandably, they are reluctant to do so. If the urban populations of Las Vegas, Los Angeles, Phoenix, and Tucson want to see significant cuts in water usage in the Lower Colorado River Basin and we still want to eat winter vegetables and desert grown fruits they will need to figure out how to provide for the economic and social needs of the agricultural communities now using the lions share of Colorado River water. Most Americans either forget, or never knew, that Mexico also gets 1.5 million acre-feet of Colorado River each year, and most of that is used for agriculture. Thus, the needs of Mexico and its citizens who depend on the Colorado River, must be considered in any scheme to stabilize the river system. It will not be easy, but it must be done. The first step is meaningful dialogue so that everyone can understand everyone else’s needs and how those needs can be accommodated with significantly less Colorado River water. We really have no choice and a long-drawn-out legal battle between urban and agricultural interests will not be beneficial.

John Hiatt, a desert activist living in Las Vegas, Nevada, is a member of the Desert Committee, and is a board member of Friends of Nevada Wilderness. His particular concerns have been water usage and protection of Wilderness Areas.