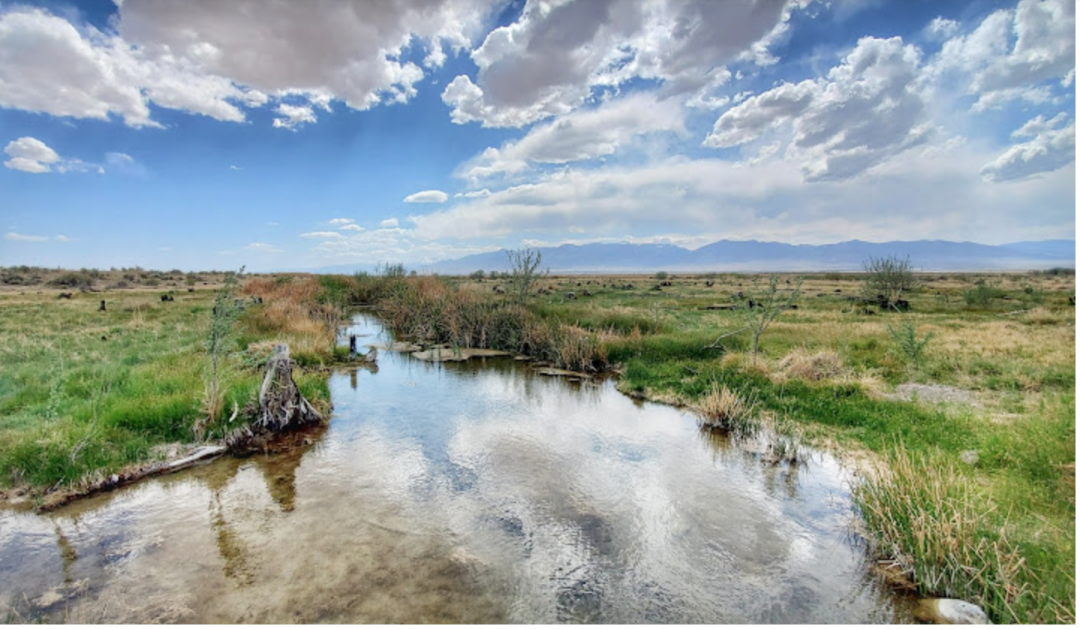 Species on the Edge of Extinction

Conservation of Aquatic Biodiversity in the Great Basin

The Great Basin is among the driest regions in North America, and yet is blessed with abundant springs which punctuate the landscape’s corrugated basin-and-range topography. In particular, the Great Basin has the densest concentration of thermal spring features anywhere on the continent, a vitally important resource since the Great Basin is a cold desert which experiences hard freezes all winter long. Thermal springs provide an essential refuge for biodiversity – the fact that they do not freeze means life is able to persist in places it otherwise could not.

Due to its extreme aridity, unique geology and topography, and the vast distances separating its surface water bodies, the Great Basin has extremely high levels of endemism. Well over 500 taxa of fish, plants, insects, mammals, amphibians, and aquatic invertebrates live in the Great Basin and nowhere else on earth – many inhabiting just a single site. These narrow endemics are frequently clinging to existence at the very limits of their physiological tolerances for extreme environmental conditions, be they water temperature, aridity, heat, salinity, nutrient deficit, or other abiotic factors.

Narrowly endemic aquatic or groundwater dependent organisms (herein aquatic endemics) are the most imperiled class of taxa in the Great Basin. Functionally every aquatic endemic in the region is threatened with extinction due to a combination of factors including groundwater overdraft, declining precipitation and runoff due to climate change, increasing desiccation and evapotranspiration from increased temperatures, direct habitat destruction, groundwater manipulation for energy production, overuse by recreationists, invasive aquatic or terrestrial species, or other factors. If we willingly allow a species to go extinct, we have diminished a world that we don't even begin to understand, and we have thereby diminished ourselves as well.

The Center for Biological Diversity is actively engaged in the conservation of these aquatic endemics, primarily through using the Endangered Species Act (ESA) to obtain protections for these imperiled organisms. In almost all cases, it is only through many years of advocacy and litigation that the US Fish and Wildlife Service (FWS) will list a species. The following are examples in which the Center has actively petitioned for Endangered Species protection. The Dixie Valley toad (Anaxyrus williamsi) is a species of the Western toad complex which lives at a single location in Churchill County, Nevada. The toad’s habitat, Dixie Meadows, is a vast wetland ecosystem fed by abundant flow from hot springs at the site. The hot springs are indicative of a geothermal aquifer, and as a result geothermal energy developer Ormat has long coveted the area for energy production. There is an extensive body of peer-reviewed literature documenting that geothermal energy production dries up or significantly alters adjacent surficial thermal water features. In one report, the United States Geological Survey stated such a thing “is the rule, not the exception.” The Dixie Valley toad has persisted for hundreds of thousands of years, and, but for the geothermal power plant proposed next to its habitat, would continue to be a happy little toad into the future. But it now faces an existential risk of extinction due to the proposed geothermal project. The water in the Great Basin’s aquifers have long been coveted by urban areas seeking water to fuel sprawling growth. So it is with the proposed Pine Valley Water Supply Project, the first part of a 70 mile pipeline-and-pumping scheme which would drain groundwater from aquifers in the West Desert of Utah to feed sprawl in Cedar City, Utah. The drawdown could propagate across a huge area of the eastern Great Basin, depleting aquifers as far afield as Spring Valley and Great Basin National Park in Nevada, and northward down-gradient in Utah toward Fish Spring National Wildlife Refuge and the Great Salt Lake itself. As a result of these threats, the Center has petitioned FWS to protect the least chub (Iotichthys phlegethontis), a rare fish which inhabits just a handful of spring systems across the West Desert. The Center previously petitioned the least chub in 2007, but listing was denied in 2014 due to a “candidate conservation agreement” in which parties including the state of Utah implemented various conservation actions to address the reasons the fish is imperiled. All of those conservation actions are for naught, however, if there is no water for the fish to live in.

Nevada is home to no fewer than 75 species of springsnail – tiny mollusks which inhabit spring ponds and brooks in thermal waters across the state. The sterile basin pyrg (Pyrgulopsis sterilis) lives at just two locations in Nye County – one location, whose current status is unknown, is on a privately held ranch actively grazed by cattle, the other is at Sidehill Spring in Stone Cabin Valley. Sidehill Spring is an extremely remote location that is heavily overgrazed by cattle and feral horses. The spring pool and brook have been decimated by ungulate hooves – and yet somehow, against all odds, the sterile basin pyrg persists. The Long Valley speckled dace (Rhinichthys osculus ssp.) is a subspecies of the more widespread speckled dace which lives only in the Long Valley caldera in Mono County, California. The Long Valley speckled dace used to be widespread in the world-famous thermal waters of the area, but a number of factors including geothermal energy development, surface alterations and diversions, cattle grazing, and invasive species have caused it to be extirpated across the vast majority of its range. They were thought to be extinct in the wild, but recent surveys reveal that they do persist at one location, in the outflow from municipal pools at Whitmore Hot Springs.

The Monte Neva paintbrush (Castilleja salsuginosa) is an extremely rare and diminutive cousin of the very common Indian paintbrush wildflower, and lives at just two locations – one on private land in Steptoe Valley, Nevada, and one on public land in Eureka County, Nevada. The paintbrush thrives in alkali soils fed by subsurface flow discharging from hot springs. Little is known about the private land population, but the Eureka County location on public land faces imminent risk of extirpation. Once persisting in complete obscurity, the hot spring it lives at became developed with a famous heart-shaped pool, and visitation increased dramatically when Travel Nevada posted a photo of the pool on Instagram. Now, on any given day there will be dozens of “van-lifers” coming through the small, vulnerable site – driving on paintbrush habitat, trampling paintbrush plants, degrading the marshland, and altering the flow regime. Finally – there is a cautionary tale. The Ash Meadows montane vole is (was) a subspecies of rodent which lived in the alkali wetlands of Ash Meadows in Nye County, and has not been observed since 1933. Repeated trapping efforts over several years in the 2000s turned up no voles at Ash Meadows, and the population was believed by the researchers conducting the trapping effort to be extirpated. While the declaration of extinction is a portentous occasion and has not been made official yet, it’s likely that the Ash Meadows montane vole is extinct due to the extensive historical alteration and destruction of alkali wetland habitats at Ash Meadows in the early- to mid-20th century. Its close cousin, the Pahranagat Valley montane vole, still persists along the White River in eastern Nevada. Will a similar fate await it?

What can we do to stanch the aquatic endemic extinction crisis in the Great Basin? First and foremost is to cease groundwater pumping which exceeds natural recharge. This is the primary cause for aquatic habitat degradation and loss in the Great Basin. Natural recharge is decreasing as climate change takes hold, so basically all groundwater pumping in the Great Basin needs to be carefully scrutinized to determine if it is acceptable given current and future precipitation trends. Secondarily, we need to invest in land management agencies to eradicate invasive species, manage recreation, and restore degraded habitat. Finally, we need to curb our carbon emissions, as climate change poses an existential threat to all aquatic endemics.

The Center for Biological Diversity will continue to use the Endangered Species Act to protect aquatic endemics, as it remains the best tool at hand to compel conservation action for biodiversity. But it will take more than just species petitions and litigation to save aquatic endemics in the Great Basin. It will take a change in our relationship with water and the land.

Patrick Donnelly is Great Basin Director with the Center for Biological Diversity. His passion in life and raison d’etre is the conservation of aquatic endemics in the Great Basin. He fights mining, inappropriate energy development, groundwater pumping, and fossil fuels from a remote desert outpost on the edge of Death Valley.