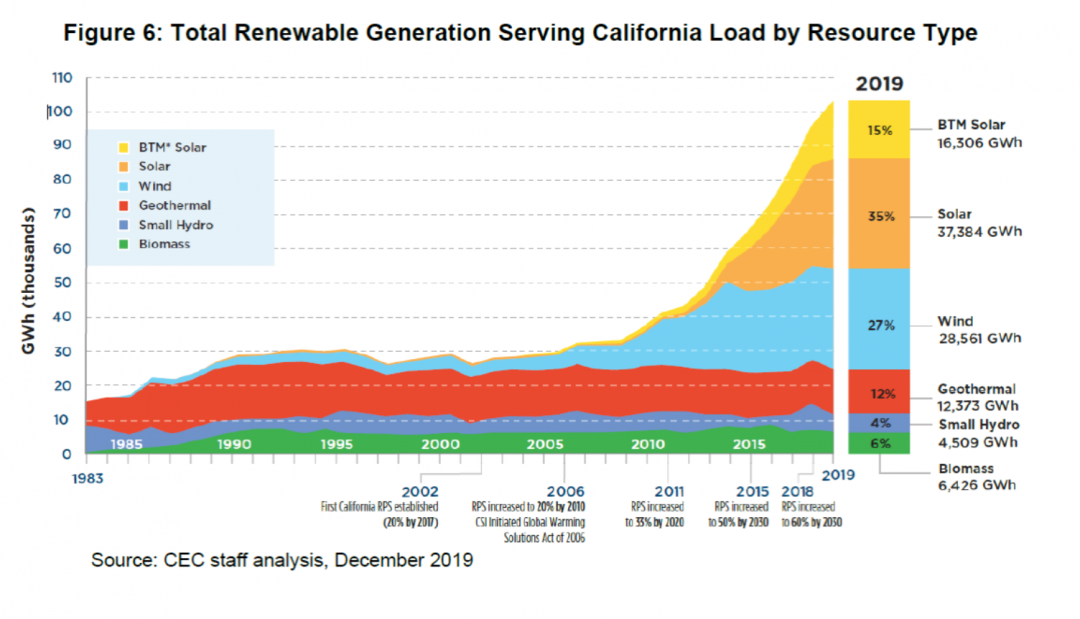 Solar Photovoltaics in the Energy Transformation

For the World and California

In the early 1950s, scientists at Bell Laboratories invented the first modern silicon photovoltaic cell – a semiconductor crystal that could convert sunlight directly into electricity, using one of the most abundant materials on the earth.1 Some time either this year or next (2022 or 2023), the world will cross the threshold of having one trillion watts of solar cells installed,2 roughly equivalent to the combined capacity of all the electric power plants of the United States.3 It took 70 years to reach the first trillion watts of solar photovoltaic cells; the next trillion watts will likely be built within about seven years.

Industrial products tend to follow a general rule that the cost of manufacturing an item decreases on average about 10 to 30 percent for each doubling of cumulative units produced.4 This has lead to about a 500-fold decrease in the cost of solar cells,5 which is about 5,000-fold reduction if the effect of inflation is removed. As a result, in the best conditions, solar cells are capable of producing the cheapest electricity available today.6

While this is a landmark achievement, solar photovoltaics still only accounts for about 4 percent of global electricity supply, and at current rate of installation would take over a century to generate the total amount of electricity the world now uses. This does not include demand growth, which has been averaging near 3 percent per year in recent history,7 implying doubling electricity consumption by mid-century.

A complete conversion to electrification of transportation, building heat, and industry, could cause an additional doubling (or more) of electricity demand, profoundly challenging those who want to move to 100 percent renewable energy very quickly, relying primarily on solar photovoltaic panels, while “electrifying everything.”

The conclusion should not be despair, but rather should motivate inquiry into the means and goals of the energy transformation. To address the climate crisis, guidance is provided by the Intergovernmental Panel on Climate Change (IPCC) report on limiting warming to 1.5 degrees Centigrade over pre-industrial average temperature,8 in accord with the Paris Agreement between nearly all nations of the world.9

For that report, climate scientists modeled 89 “pathways” between 2020 and 2050, each of which includes a different combination of assumptions about the development of energy demand, shares of various energy resources, electrification (of industry, transportation and heat), land use, and carbon sequestration. Fifty of the pathways limited warming close to 1.5º C, which included starting with a quarter of world electricity from renewable energy in 2020, increasing to half by 2030, and an average slightly over three quarters by 2050.10

Prioritizing reduction of the most carbon-intensive fuels is an important complement to increasing renewable energy. Nearly all coal used for electric generation is phased out by 2050, while an average of about 9% of electricity is still produced by fossil fuel, mainly natural gas, in these scenarios.

Rather than focusing on only one renewable resource, the pathways have various blends of energy resources. The maximum scenario for solar photovoltaics is just over half of electricity from a combination of solar and wind by 2050. Through limiting demand growth, blending different resources and approaches, and balancing different essential goals (sustainability, feasibility, affordability, reliability, etc.), following the IPCC model pathways for solar photovoltaics out to 2050 becomes much more feasible. Nevertheless, reaching the scenarios limiting warming to 1.5º C over pre-industrial global temperature, will require roughly tripling the current rate of installing renewable electric power, including solar photovoltaics.

Widening the scope of available tools can help a lot, using the concept that “many hands make light work”. Photovoltaics is just one of a number of methods for using solar energy, which can also provide hot water, space heat, lighting, cooking, industrial processes, air conditioning, refrigeration, generate electricity from heat, and produce renewable fuels.

Some of these applications already exist at a large scale, with half a trillion watts of solar thermal (mostly solar hot water) panels installed in the world today.11 However, this is a small fraction of the potential, providing about one percent of building heat.

Direct use of solar energy – where it is possible – is usually far more efficient than solar photovoltaics. For example, converting sunlight to electricity, then using the electricity to power a lightbulb, wastes at least 90 percent of the captured solar energy.

This dramatic success has been accomplished through a coordinated set of policies all pulling in the same direction:

Despite long standing concerns about the aggressive renewable electricity law, its targets are so far easily being met, with the large utilities and most other retail sellers reaching or exceeding the 33 percent requirement for 2020.24 While historically, biomass, geothermal, and hydropower where the main sources of renewable energy, in recent years at first wind and then solar photovoltaics have dominated new development.25

By 2019, half of California’s renewable energy was solar photovoltaics. (In the graph, “BTM Solar” means solar photovoltaics that is behind customer meters, while “Solar” refers to utility scale solar projects contracted by retail sellers of electricity) This emerging pattern is true not only in California, but also in the United States as a whole, where 90 percent of new power generation is renewable, primarily solar and wind.26 Current events remind us that the existential imperative of reducing greenhouse gas emissions is only one of the reasons for transforming the energy system. Even if there were no global warming, the depletion of extracted fossil resources would force the issue, for human survival. Fossil fuels cause air pollution which kills and sickens millions of people, and causes trillions of dollars in damage every year.27 Fossil fuels pose immense global security challenges, and for a century have been a center of conflict between nations, with the war in Ukraine only the most recent example.28 Fossil fuels also increase energy insecurity by creating vulnerable energy infrastructure, including power grids, in the context of a warming world.29,30

Solar photovoltaics is a key tool that, if rightly deployed in combination and balance with other tools, can bring about a revolution in energy to help resolve several of the most important problems of our time.

Robert Freehling is an independent consultant who focuses on state and local clean energy policies.

5) What Is the Learning Curve—and What Does It Mean for Solar Power and for Electric Vehicles? - Union of Concerned Scientists (ucsusa.org).

6) Race Heats Up For Title Of Cheapest Solar Energy In The World (forbes.com).

14) California’s renewable energy law excludes hydropower from plants larger than 30 megawatts, as well as small solar projects providing electricity for customers’ own consumption, even though both are “renewable” by conventional definition and for model pathways in the IPCC 1.5C report.