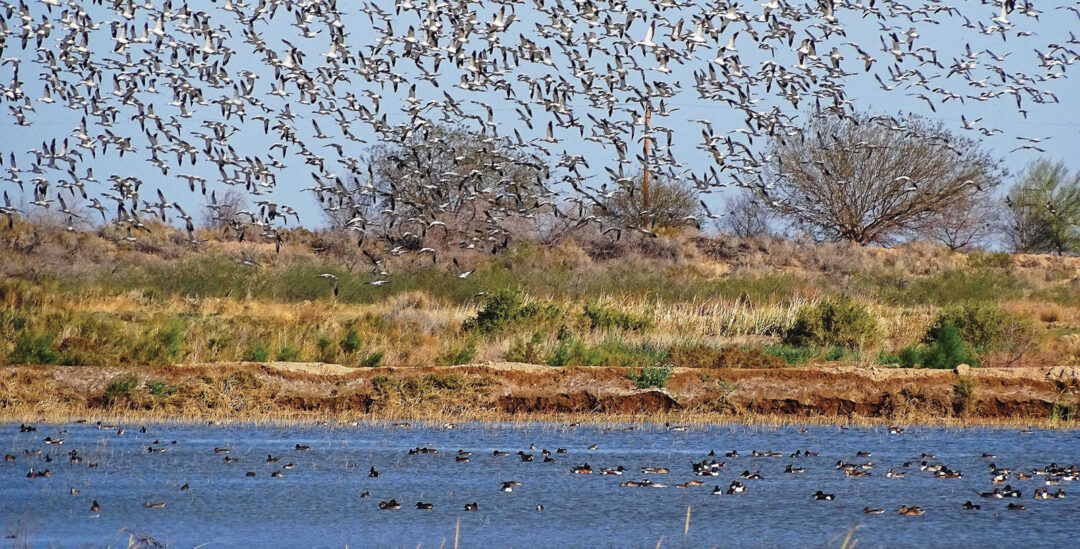 by Joan Taylor   |  As the saying goes, “Whiskey is for drinking, but water is for fighting!” Nowhere is that truer than in the American southwest. And unfortunately, the long-term fate of the Salton Sea rests squarely on a regular influx of water and lots of it.

Currently the lifeblood of the Salton Sea is wastewater from hundreds of thousands of acres of irrigated farmland at the south end of the Sea in Imperial County and with a much smaller contribution from the Coachella Valley to the north.

Photo above: “You have a situation now where the Salton Sea is about the last large-scale stopover point of the Pacific flyway,” Bruce Wilcox, Assistant Secretary for the Salton Sea, California Natural Resources Agency. Photo by: Cindy Knoke https://creativecommons.org/licenses/by-nc-sa/4.0/legalcode

Where does this wastewater come from? Ultimately its source is the large allocation of Colorado River water to local water districts. The question is: will agricultural runoff remain adequate to maintain the “smaller but sustainable Sea” envisaged for the future? It is hard to say, but if the answer is no, then there will need to be a major fix.

How it got this way

For the past century since the Salton Sink was re-filled by an errant Colorado River, the Salton Sea has actually been a prolific fishery. So while California coastal and inland wetlands were being gobbled up by development, millions of migratory birds found a lifesaving stopover at the Salton Sea. Here, birds can gorge on fish and other aquatic organisms, replenishing their stores of energy on the long trip along the Pacific and Central Flyways, all the way from Patagonia to Alaska for some. Thus the Salton Sea is now critical for avian migration in the Americas.

The State’s “Ten Year Plan” to create a smaller but sustainable Salton Sea proposes to construct thousands of acres of cascading, shallow-water habitat on the receding shoreline while the center of the Sea becomes progressively too salty for most organisms. (see companion article “ Earth, Air, and . . . Politics ” in this issue of the Desert Report.)

If constructed, this shallow wading habitat will resemble the present shoreline used by birds that do not eat fish. However, for half the 400 species that rely on the Sea when migrating and overwintering ⎼ namely, the birds dependent on fish ⎼ the future is far less certain.

Near-term effort to sustain a fishery

While constructing the shallow wading areas, the state also plans to provide pockets of water sufficiently deep that fish do not freeze in winter or overheat in summer. There is also a tentative plan to enclose perhaps 600 acres of water for a pilot tilapia hatchery/fishery, whose depth may be limited by levee safety regulations. One would hope those regulations would not apply when a breach of the levee would simply send water into another body of water ⎼ the central part of the Salton Sea.

The question is: will these modest efforts sustain a fishery in the quantity needed to sustain piscivorous (fish-eating) birds dependent on the Sea? Given the fact that the current Sea covers over two hundred thousand acres, this appears to be a stopgap effort at best.

But there may be two reasons for some optimism: one, fish from the hatchery might successfully stock the surrounding Sea, since adult fish can withstand more severe salt conditions than young fish. Secondly, the humble endangered desert pupfish may thrive at the constructed outlets which will convey water to the cascading shallow habitat. Wouldn’t it be amazing if an endangered species saved piscivorous birds along the great Pacific Flyway?

The big question mark is the quantity of water available for the Sea in the future as well as how much concentrated salts and other chemicals will lace that water. The last serious hydrology projection for the Salton Sea used 2003 numbers and is now outdated.

Moreover, while that report examined the effects of the impending water transfer to San Diego, it didn’t adequately factor in climate-change-induced drought or vastly increased water conservation in the Imperial Irrigation District, where already half of the farms have stopped flooding the fields. Water conservation, while eminently laudable, will reduce inflows to the Sea and make it even saltier.

The water transfer to San Diego and the trend toward water-efficient farming are not the only major threats to the Salton Sea. In recent years, the Colorado River has been beset with unprecedented drought, and if Lake Mead drops to certain low levels then severe restrictions will be imposed on neighboring states. Thus, very powerful interests are leaning on Imperial Irrigation District (and individual farmers) to relinquish yet more water to aid water consumers elsewhere. This would indeed be a third whammy on top of the existing large water transfer to San Diego and ongoing water conservation by farmers.

Without a guaranteed supply of relatively unsalty agricultural runoff, one has to ask: could even a smaller Salton Sea be sustained?

This is where the Long Range Planning Committee comes in. Convened by the State with county, farming, development, scientific, community, environmental, and wildlife agency representation, the Committee is charged to evaluate various potential strategies such as importing ocean water, or cleaning up Salton Sea water, or beneficial land use scenarios. This evaluation will be undertaken while the Ten Year Plan for the Salton Sea is being implemented. Eventually, the Committee will recommend an approach to manage the Salton Sea long term, an approach informed by input from various project proponents, other committees, stakeholders, and the public.

Proposals have run the gamut from multi-billion dollar projects like boring huge tunnels from the Pacific Ocean to the Salton Sea and back, to more modest proposals like cleaning hyper-saline water using geothermal energy or biological means. Unfortunately, few of the proposals made to the Committee have any serious engineering or financing behind them, and many proponents are seeking state funding to develop their ideas, something the state is not inclined to provide.

As bizarre as some of the ideas may sound now, who knows? Will Elon Musk succeed in perfecting a super-efficient and economic boring tool? Will it become commercially feasible to desalinate water on a scale sufficient to remediate the Salton Sea? Some proposals, or elements of them, may be part of a recommended long-term strategy.

Meanwhile, in order for the Committee to recommend that the State support a project, it has to be shown as technically and economically feasible. One of the biggest handicaps in planning for the future is the lack of a reliable updated hydrology report which would address such variables as climate change and potential relinquishment of water to outside interests.

The long-term ecological health of the Salton Sea is an immense challenge, and the options are limited by technical and economic feasibility plus a need to balance the various competing interests. But a prime goal must be to preserve what is truly critical habitat for the millions of migratory birds which now rely upon the Salton Sea for their survival as they make their lifelong journeys along the great Pacific Flyway.

Joan Taylor is Vice Chair of the Desert Committee, Chair of the Calif/Nevada Desert Energy Committee of the Club, and appointed member of the Salton Sea Long Range Planning Committee.