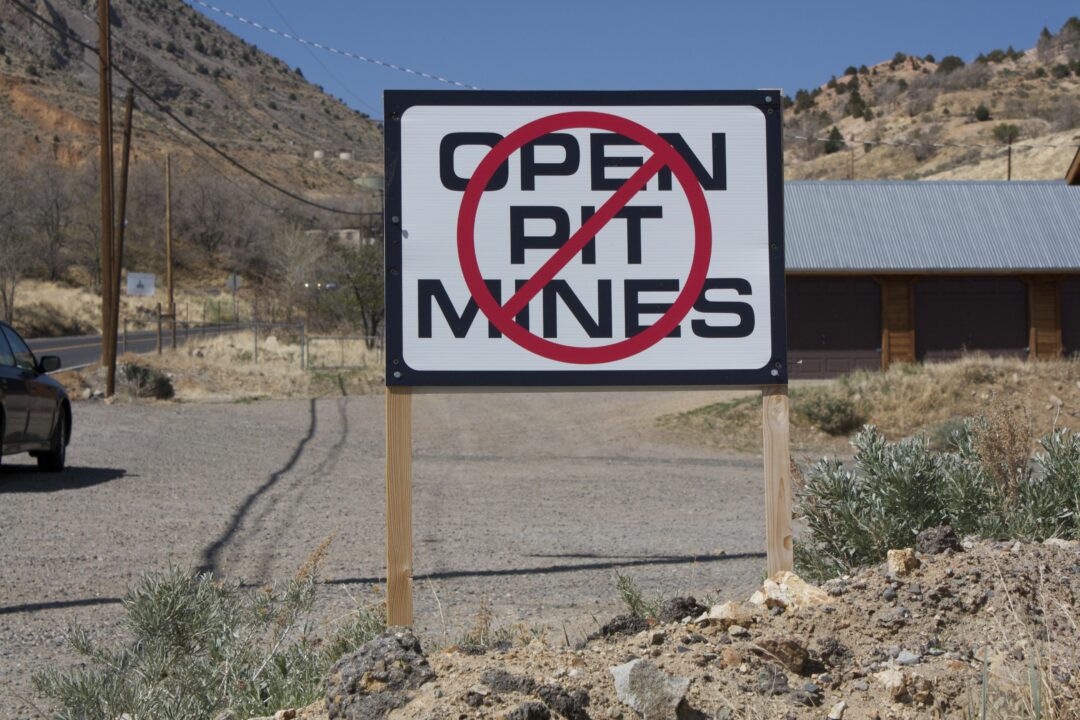 Here in northern Nevada we’ve all heard tales of the Comstock District silver and gold rush, about 30 miles southeast of Reno, which started up right after the ‘49er gold strike in California. Unlike gold towns that became ghost towns, people hung on here, and today tourists from everywhere walk the boardwalks and visit the saloons, cemetery, and restored opera house of Virginia City. This was the hub of the Comstock, and in its heyday it was touted as the richest town in the country. Mark Twain ran the Territorial Enterprise from a building still standing in the center of town.

The underground mines of the Comstock made some people wealthy and ruined many others. Their riches contributed to the transformation of San Francisco while stripping entire mountains of timber for tunnel supports. The mines were centers of technical innovation in an era when engineering feats were opening up new industrial possibilities everywhere. People marvel to hear about the gravity fed aqueduct engineered in the 1879’s to supply water to the arid Comstock from the Sierra Nevada, 30+ miles away, which even today supplies residents with pure alpine water.

Less well known than Virginia City are two nearby towns that also figured in Comstock history, Silver City and Gold Hill. They lie south and downhill from Virginia City in Gold Canyon, which winds precipitously south towards Carson City. Victorian-era homes are mixed with off-grid, owner built homes and other buildings among steep hillsides pocketed with old mining shafts, tailings, and falling down wooden structures. The Comstock is now a unique, beautiful, quiet, and neighborly place to live. Silver City (population 170) residents are proud of the community center they built in 2004 to replace their old one (built in 1867) when it burned down.

All three towns lie within the Comstock National Historic District, a state of Nevada designation, as well as within the Virginia City National Historic District, a National Park Service designation. The documents for the 1961 designation of the district note that “the mines are closed and the sound of the tourist is heard in the land.” The Master Plan of Storey County, where Virginia City is located, recognizes that tourism, not mining, is the economic force in the county now.

Enter modern mining methods and the thirst for gold that never ends. Since 2010 (there were previous attempts at modern mining), the quiet in Gold Canyon has been broken by pneumatic drilling. Comstock Mining Inc. (CMI) earlier consolidated 70% of the mining claims here. They own or control over 7,000 acres of claims: 1376 acres of patented and surface claims, and 6071 acres of unpatented BLM land. “Unpatented” means owned by the citizens of the US. CMI’s plans, for which there are no Plans of Operation yet filed (a significant detail), include underground mining of old claims and more open pit mining. Today two open pit mines, Lucerne and Billy the Kid, are being worked by CMI southwest of Gold Hill and about 1000 feet across the road from homes in Silver City.

The Lucerne Pit’s effects include industrial-level noise, of which resident Joe McCarthy says the constant backup “beep beep” of haul trucks are what drives him the most crazy. Residents also hear dynamite blasting and other industrial sounds amplified in the narrow canyon. The drilling of exploration holes goes on in multiple locations.

The heap leach process used by CMI to extract gold from waste rock employs cyanide for processing; an estimated twenty tons of waste rock yields enough gold for a ring. Cyanide is trucked in on winding and narrow Highway 341 right along with other traffic. Home values in the Comstock are shaky. “One buyer here” said Joe, “CMI”. Who would choose to relocate within earshot of a working mine?

Dust blowing from the pits and processing site and possibly from explorations is made more problematic because mining during the bonanza days used elemental mercury to separate gold and silver from waste rock. The Comstock, with two historical designations and approximately a thousand residents plus tourists, is on the National Priorities List as the Carson River Mercury Superfund Site (CRMS) because dangerous levels of mercury persist in water, air, and earth, and especially in tailings at old mill sites. Arsenic and lead have also been identified as Contaminants of Concern in the CRMS.

The latest (2012) study of levels of mercury, lead, and arsenic at the Lucerne Pit site was completed by an engineering firm hired by Comstock Mining. It found nothing that exceeded the state’s actionable levels for lead and mercury. They found arsenic in mean concentrations slightly above the Residential Screening/Action Level but concluded, based on other evaluations paid for by Comstock, that the arsenic data was indicative of naturally-occurring concentrations and thus not subject to Superfund oversight.

Some residents question the credibility of data gathered and analyzed by parties contracted by Comstock Mining. Others are concerned because all mercury-poisoned sites within the 5-county area of the CRMS may not have been identified by the EPA.

Activists wanting to mitigate or stop mining disturbances around their neighborhoods and within the two historic districts must deal with two county governments, Storey and Lyon, two planning commissions, and two Boards of County Commissioners. Both counties could use the tax revenue from the mine. And the jobs argument comes up frequently in these historically economically depressed counties.

From the point of view of neighbors and the Comstock Residents Association, the worst blow came last December when Lyon County commissioners voted to grant CMI (or whoever owns the properties next) Master Plan amendments for another pit, this time within Silver City’s town boundary. Some homes are as close as 250 feet from the proposed diggings at the old Dayton Consolidated Mill site. “Master Plan Integrity Loses to Money and Power” wrote Nancy Dallas, a local commentator.

The most significant governmental issue facing CMI in 2014 is their right-of-way application for the construction and exclusive use of a haul road between their Lucerne Pit and their heap leach facility at American Flat. Since it crosses BLM-managed public land, an Environmental Assessment is necessary; if they are not granted the haul road right, they must continue to haul on State Highway 342. Earlier statements by mining officials spoke of moving the highway. Who will pay for that? CMI has yet to turn a profit and carries a considerable debt load.

Great Basin Resource Watch (GBRW) views such instances of industrial mining in neighborhoods as “residential mining.” The Comstock, in which mining also affects travel, and tourism, viewsheds and structures in two historic districts, fits and even exceeds definitions of environmental dispossession and environmental injustice.

What has now occurred in the Comstock is reminiscent of to tribes dispossessed by mining all over the globe, Appalachian residents displaced by strip mining, people affected by fracking, and closer to home, to the predicament of residents north of the Anaconda Mine in Yerington whose water is poisoned by radionuclides. The Western Shoshone lost a sacred mountain (Mt. Tenabo in central Nevada) where nearby sacred springs are expected to dry up. Archeological sites, medicinal plants, and wildlife are gone, replaced by the giant Cortez Hills Gold Mine.

In 2005 a Nevada judge ruled that Washoe County had authority to deny a company’s proposal to mine clay for cat litter near the Reno-Sparks Indian Colony. Washoe County had cited concerns that the mine would contaminate the air and groundwater with arsenic, lead, and cadmium. The company, backed by the federal government, sued the county. Invoking the 1872 Mining Law, which was established to encourage gold mining on federal land, U.S. lawyers argued that Washoe County could not deny the right to mine on federal land. However, Nevada District Court Judge James Hardesty disagreed. His ruling was the first to allow a local government to override the federal mining law in response to community and environmental safety concerns, said Roger Flynn, the tribe’s attorney. In spite of this case being touted by activists as precedent setting, residential mining and the 1872 Mining Law persist.

Also persisting are questions about CMI’s intent in delaying mining on public lands within the Comstock District. Are they avoiding filing Plans of Operations required by the National Environmental Protection Act (NEPA) and waiting for the pendulum to swing further towards state control of public lands, when there may be no NEPA equivalent?

One possible instrument to correct some abuses and change the power differential between citizens and mining companies would be for Nevada to pass its own environmental quality law. Reform of the 1872 Mining Law is inevitable. Cumulative impacts of mining must be more broadly defined. All these changes are sought by GBRW and other groups.

Back on the Comstock, CMI may run out of money and borrowing sources. But without legislative/regulatory reform at all levels there is no guarantee that, given the enduring attractiveness of precious metals, another mining company with thirst for the gold here may not move in and the destruction will begin anew.

Susan Juetten lives in Washoe Valley, Nevada. She often gets involved with environmental issues in the state and sometimes works for Great Basin Resource Watch in Reno.