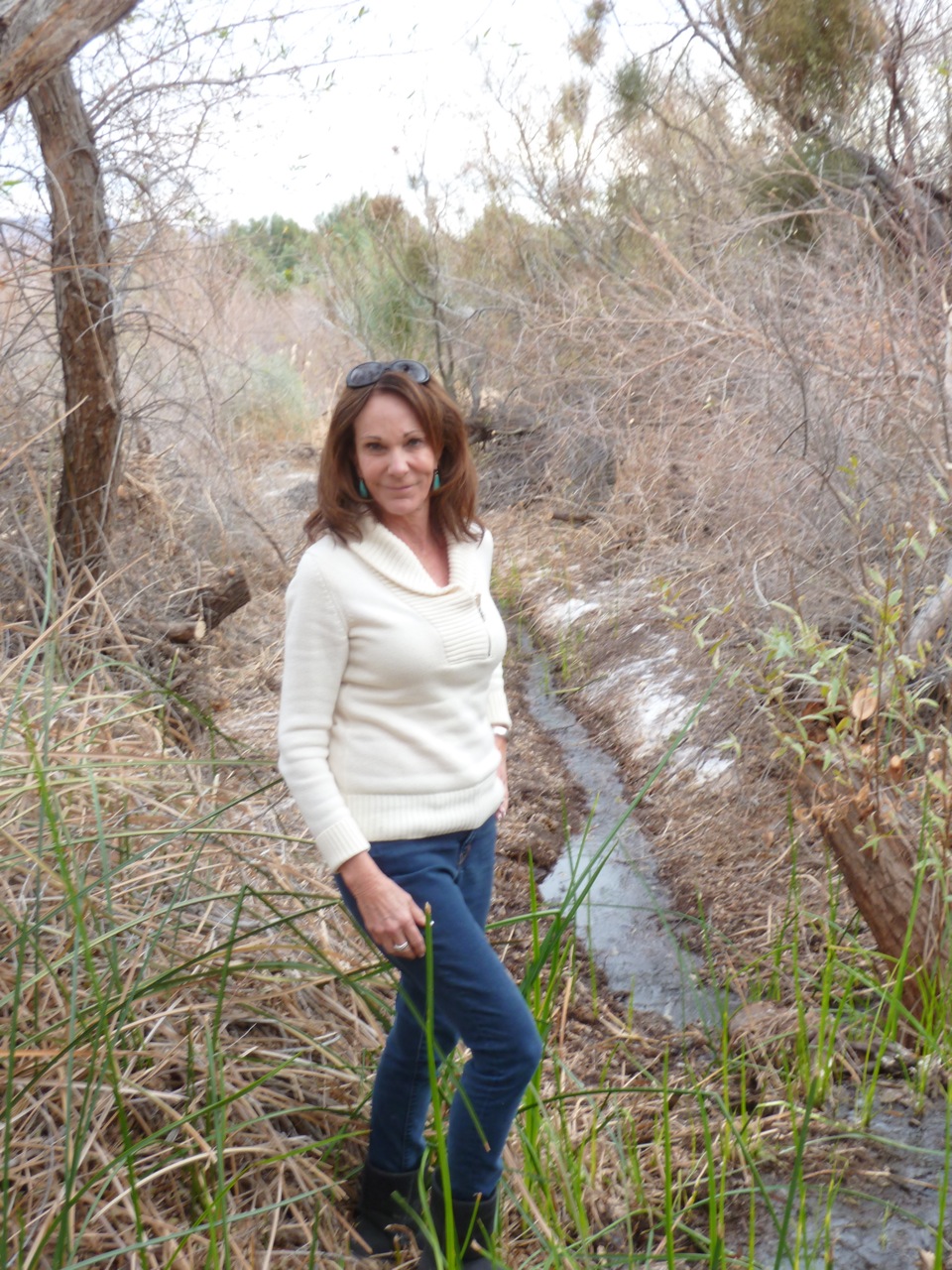 PIONEERS IN THE DESERT

a lesson for the Future

by Craig Deutsche, former editor of the Desert Report

Entering Death Valley from the south, one is nearly compelled to pass through the small town of Shoshone, California. While there is a highway maintenance station near the village entrance and a modern gas station as well, it would be the older and more rustic buildings that catch your eye: an old museum with a rusting, early-model auto in front; the Crowbar Cafe with a cowboy logo and wooden tables outside; a strangely painted community hall; and a small green, wooden bungalow off to the side. These are relics from an earlier history, a time far from the extravagances of the twenty-first century. All this might have vanished thirty years ago with the collapse of the regional mining ventures if it were not for the efforts of the local town manager, Susan Sorrells. Shoshone was founded by her great grandfather, but Susan must be considered a new kind of pioneer in the western tradition.

I first met Susan fourteen years ago at a meeting held in the community hall. A group of people were being conducted on a tour to a nearby trackway with the fossilized footprints of a great variety of Pleistocene mammals, and it was purely by accident that Susan and I began talking. Several years later I planned to bring a high school geology class to see this same trackway. As we spoke on the phone, I learned that Susan had once been a boarding student at the Westlake School for Girls, the very place where I had begun my own teaching career. Over the years we have spoken many times, and much of the conversation has centered on her family history as they arrived and then settled in the southern Death Valley region.

The family first came west when Susan’s great-great-grandfather, David Fairbanks, arrived in Salt Lake with Brigham Young. Among his ten children was a son, Ralph Fairbanks, who was later to be known universally as “Dad.” Over the years this son worked as a swamper on a wagon train along the Mormon Trail, as a prospector in Pioche, Nevada, and as a teamster driving freight wagons out of Las Vegas and eventually to the mining camps of Greenwater, to the south of Death Valley. These mines, like most of those in Death Valley, were promotions that drained the investors and produced almost nothing from the ground. Before these mining ventures collapsed, “Dad” had moved thirty miles south to the present site of Shoshone, where he bought land and established a variety of business ventures. His nickname was accidental. When Native Americans were present, his children always addressed him as “Dad,” and so quite naturally the Indians also called him “Dad.” In time everyone referred to him this way, and it is said that even his own parents eventually called him “Dad.” He was the founder of Shoshone. This was in the very early 1900s.

Among Dad’s acquaintances was a younger fellow, Charles Brown, a miner and allegedly sheriff in Greenwater. Charles fell madly in love with one of Dad’s daughters, Stella, but by her father’s decree their marriage had to wait till the day she turned eighteen in 1910. By this time the Tonopah and Tidewater Railroad had pushed north to service the mining ventures in the region. As the terminus of the line, Shoshone became a major hub of commerce, and Dad was a major financial beneficiary. Charlie and Stella had moved to the Dale Mining district, near present-day Joshua Tree National Park, and then to Tonopah, where Charles rather successfully invested in a bar. By this time Dad was older and living alone, and in 1920, at the request of one of Stella’s sisters, Charlie and Stella returned to Shoshone to help manage the business. A few years later Highway 127 was completed north from Baker through Shoshone, and tourism became a second economic engine for the family.

In time Charlie became the principal citizen of Shoshone and rather a legend of the area. He was elected to the California State Senate, where he served for twenty-five years. The store in Shoshone goes by the name “Brown’s General Store,” and state highway 127 running north to Death Valley is signed as the “Charles Brown Highway.”

Charlie Brown had four children, two boys and two girls. One of the sons had a distinguished military career in World War II and went on to become a circuit judge. The second son took over the family holdings in Baker, California. The oldest of Charlie’s four children was a daughter, Bernice, who married Maurice Sorrells. As Charles became older, he asked Bernice and Maurice to return from their home in Sacramento to help run Shoshone and the businesses there. When Maurice was elected a Supervisor of Inyo County, it was Bernice who became the principal town manager. Susan Sorrells has described the family business during those years.

“Shoshone was the hub of commerce in the Amargosa and Death Valley area. Our family owned a Standard Oil dealership and a wholesale grocery and dynamite business, and they took supplies to the seven or eight mining camps in the area, where about forty miners stayed during the week. There were also about fifty mines in the area, most of these being talc, but there were also gold, lead and silver mines. My family also owned a store, bar, café and lodging in Shoshone. The area was booming and it was really good business.”

Susan has also spoken warmly about her childhood growing up in the town:

“Shoshone was a paradise for children growing up there. We were so free. It was fabulous. Everyone owned horses and we would go on overnight rides for two or three days. This was when I was eleven and my brother was seventeen. Almost daily I rode my horse into the wetlands and surrounding hills where I spent a lot of my time. I really loved the land. It was a wonderful, wonderful life.”

The journey to adulthood was not direct, and perhaps Susan’s travels have been even more varied and adventurous than those of her ancestors. Eventually, however, they brought her back to her childhood home. After elementary school in Shoshone, she went one year to a Catholic school in Los Angeles, returned to Shoshone for tenth grade, and then, as already mentioned, completed high school at Westlake School for Girls.

Susan had no interest in the family business and went off to college: one year at the University of Southern California and an eventual graduation from Smith College in Massachusetts. Politics had become an interest, and Susan worked one year as an intern in Washington DC and then spent two years in Liberia in the Peace Corps. Perhaps this latter experience motivated her to complete a Master’s Degree in African studies at UCLA. She was married briefly, lived several years in Europe, and finally returned to Shoshone when her mother’s failing heath required assistance. Again in Susan’s words:

“I was living in Geneva when my mother needed assistance in managing the businesses. My mother and I were very close, and I told her that I wanted to come home and work with her until she decided what she wanted to do, such as getting a general manager or selling the property. She had expressed an interest in leaving the desert and working for the United Nations.”

Susan’s father had died some years before, so upon her mother’s death, Susan became owner and manager of the town. In 1985 the mining endeavors south of Death Valley collapsed, and the town struggled to survive. Ultimately Susan and the community decided that their economic future lay in tourism – but it would be of a sustainable kind that respected and valued the land.

The town has established several non-profit organizations to promote environmental protection. They have worked hard to restore nearby wetlands, and they have partnered in several projects with the local Bureau of Land Management. The town has encouraged researchers, both in biology and geology, to visit, study, and use their facilities. Many of these developments have already been described in the Desert Report article “Communities In The Amargosa Valley Strive To Make Tourism A Success” (June 2012). Susan Sorrells may be a new kind of pioneer who leads in a direction that will become increasingly important in our future. Her own words best describe her vision for the future:

“Our goals are to establish a town where people and endangered species live side by side. We strongly believe that people don’t have to be the enemy but instead can caretake and steward the environment where they live. As a result, the residents and guests will be renewed by their interaction with nature, which is already happening.”

Craig Deutsche describes himself as a long-time desert rat. In an earlier life he was a high school teacher, a distance runner, and an editor for the “Desert Report.” Retired now, he humors a bird-watching wife and is a committed volunteer in the Carrizo Plain National Monument.