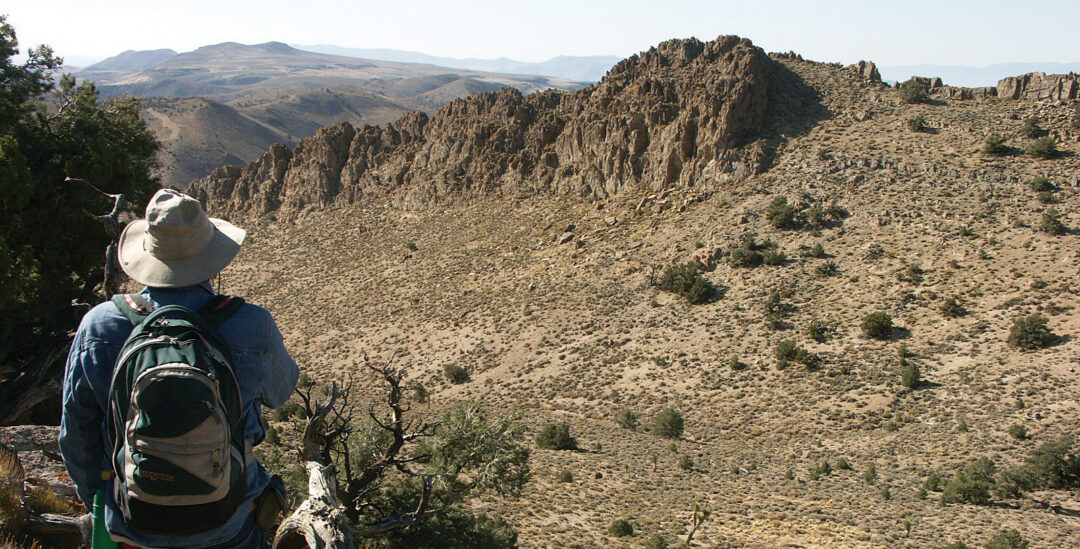 Once Again Threatened by Gold Miners: Conglomerate Mesa, On the Western Rim of Owens Lake

by Tom Budlong   |   Nine companies* have looked for gold at Conglomerate Mesa. Looked and left.

The early ones started around 1984 when Conglomerate was the Cerro Gordo Wilderness Study Area (WSA). Then in 1994 the California Desert Protection Act (CDPA) released the area from WSA status. More came. They ranged from biggies (Newmont, BHP), to ‘penny mining stock’ operations. Sungro Minerals left when its shares hit 1/100th of a cent.

Photo above: Looking south across to the exploration area. Photo by Tom Budlong.

The tenth, and current, applicant is Silver Standard Resources (from B.C. Canada), now SSR Mining. (SSRM on the NASDAQ). This operation is Not a penny mining stock. It has three operating gold mines in three countries and several active explorations; Conglomerate Mesa, fortunately, not yet among them. SSRM’s balance sheet shows several hundred million cash in the bank.

Silver Standard wants to explore Conglomerate Mesa. As of this writing, it has prepared an Environmental Assessment to disclose the impacts of drilling seven 1,000 foot exploration holes at the south end of the Mesa.

Conglomerate Mesa is true wilderness by any common understanding and certainly by the official definition in the 1964 Wilderness Act. The notorious Wilderness Act word is “untrammeled” and Conglomerate fits the very definition of that word. I’ve walked Conglomerate at least twenty times and have never seen anyone except those with me. The solitude is overwhelming: views of the Sierra Nevada Range just to the west, views up and down Owens Valley, views looking east with range after range disappearing into the horizon. Primitive and quiet dominate.

Releasing Conglomerate from WSA status in the 1994 CDPA is a well-recognized error. Conglomerate has no roads, lakes, streams, seeps, trails, dirtbikes, pick-and-shovel era mining remains. It does have a pleasant scatter of piñon, Joshua Trees, junipers, and numerous smaller native plants. The only evidences of man are scant obsidian flakes and the remains of short-lived charcoal burning camps.

Conglomerate can give us a history lesson in scratching for a living during early western settlement. The most obvious features are small and scattered, from charcoal burners that supplied nearby Cerro Gordo with smelting fuel. Rude piles of harvested piñon pines were open-burned. The “burn pit” locations were so sterilized by fire that nearly 150 years later  plants still struggle to grow on them. The pits are a dark color from charcoal bits and dust too small to recover for transport to Cerro Gordo. The charcoliers did not organize or cooperate to construct more efficient burning kilns, such as the two eroding adobe kilns on the floor of Owens Valley or the rock kilns in Wildrose Canyon forty miles east. They could well have been desperate individuals, scratching enough charcoal to buy bacon and beans for the next meal. Marion Howard, the self-sufficient “Beekeeper of the Inyos,” speculated that, except for modern government support, individuals like the charcoal burners would still be scratching the hills, getting along somehow.

Still unexplained are small stacked rock structures near the burn pits on the Mesa. They appear to be fireplaces, but with little evidence of usage and unexplained features beyond simple utility. Remains of cabins or roof structures at the sites are absent. Piñon stumps, most still standing due to the Mesa’s dry climate, surround the pits.

These “entrepreneurs” of the 1870 era were out-competed by charcoal from the Sierras and imports from Nevada when the Carson and Colorado RR got to Keeler in 1883. The scarcity of burn pits indicates a short active period.

Few Native American artifacts are seen. With its scarcity of water, the attraction to Native Americans would be piñon nut harvests for short periods during years when the trees produced. Other than the few obsidian flakes, only one small drilled sea shell has been located.

Where is Conglomerate Mesa?

Look east from Mt. Whitney. Ten thousand feet below is Owens Valley. Mountains on the other side of Owens Valley are the White/Inyo range, the first of the Basin and Range sequence, 100 miles long with 11,000 to 14,000’ peaks. Most of the northern hundred miles are in the White and Inyo Mountains Wilderness. The Malpais Mesa Wilderness is in the south. The gap between is the Cerro Gordo mining site (dating to 1860s) opposite Owens Lake, and Conglomerate Mesa south of Cerro Gordo.

From Owens Lake look east, Conglomerate sits 3000’ above the floor of Owens Valley. Looking north from the Saline turnoff on Hwy 190, Conglomerate looks mysterious. You could imagine isolated relict dinosaurs up there.

Evidence so far indicates Conglomerate, if it has gold, is a Carlin Type deposit. Carlin is a Nevada location where gold ore has a tiny concentration of sparsely distributed invisible gold particles. “Good” ore is quantified in a few grams per ton. That’s why the pick-and-shovel miners were not there. The miners could not see the gold.

Carlin type gold indicates open-pit cyanide heap-leach mining as the only economically possible way to extract gold particles from this kind of low-grade ore. Carlin, NV makes significant use of cyanide open pit heap-leaching. In fact, Newmont Mining, one of the nine previous Conglomerate explorers, is credited as one of the major developers of the method that was used at the Carlin site. The production at Carlin has been rich.

Few ore bodies are on the surface. The open-pit cyanide heap-leach mine process hauls barren overburden (rock lying above the gold-bearing ore) to waste piles adjacent to the mine. The exposed ore is then dug out of the pit and hauled to leaching piles (the heaps) where the gold is extracted by cyanide solution sprinkled on the heap. The solution percolates through the heap, picking up the microscopic gold, and is collected at the bottom of the heap. Giant trucks move the overburden and ore, burning huge amounts of fuel. The process is an alchemy that converts diesel to gold.

If Silver Standard exploration is successful and a mine is permitted, Conglomerate will almost certainly become an open-pit cyanide heap-leach mine. The Briggs Mine in Panamint Valley, Inyo County’s only such mine, is well-hidden. Access roads, large haul roads, the mine’s piles and heaps are moderately remote. A Conglomerate mine would be in full view of travelers on U.S. 395 visiting the Sierras in the summer and Mammoth skiing areas in the winter. Travelers on Hwy 190 going to and from Death Valley, along with Saline Valley recreationists, would also have a full view of the mine’s open pit.

An open pit mine leaves a giant hole in the ground adjacent to giant piles of dirt and rock. The pit, haul roads, and piles of waste rock and depleted ore destroy everything of cultural and historic value, all vegetation and wildlife habitat. High winds create plumes of airborne dust. Recreation opportunities are eliminated. Natural vistas are replaced with jarring unnatural landscape.

The question after the ore is depleted and the mine closed, will be “What happened here?” The only answer would be “It seemed like a good idea at the time. People needed jobs.” And Inyo County had a budget problem. These arguments will be trivial for our descendants, and forever. Millions of years would not heal the scar.

My “discovery” of Conglomerate Mesa came from scanning U.S. topo maps of the area. Three editions have been published – 250,000 scale in 1913, 62,500 scale in 1951, and the current 24,000 scale series, in 1987. Understand that surveying for these maps was done probably ten years before the publication date.

Shown on each map is a freighting trail built around 1885, shortly after the Carson & Colorado narrow gage railroad reached Keeler on the east edge of Owens Lake. The trail runs between Keeler and the Racetrack in Death Valley. A group from Desert Survivors used it several years ago for the first half of a backpack from its west end at Keeler to Bullfrog in Nevada.

The oldest map shows the whole trail, but with minimum detail due to the map’s large scale. The 1951 map shows most of the trail in better detail. It has almost disappeared on the current 1987 version. Its omission as new maps replaced older maps indicates an abandoned trail. I found most of it after some hunting. It has been dozed into a 4WD track out of Keeler and has disappeared through normal weathering and plant growth where it crosses flatter ground between mountain ranges. In the mountain ranges it’s still there.

The trail builders used a saddle at the north end of Conglomerate Mesa to get over that part of the Inyo Mountains. The temptation to see what was south of the saddle could not be ignored. Exploring and discovering this trail artifact, and Conglomerate Mesa as a side benefit, is to experience a tiny part of California’s historic gems.

Mining requires mining claims, properly recorded with the BLM and the local county. Conglomerate Mesa is blanketed with claims. Most are rectangular, 600’ x 1500’ (20.66 acres). The various mining companies that have recorded claims as needed then abandoned them when interest died.

Claim registration must be maintained. The cost is about $150 per year. Two partners, Steven Van Ert of Chatsworth, CA, and Noel Cousins of Tucson, AZ, recorded several hundred Conglomerate claims around the time Conglomerate was released from WSA status in 1994. The claims have been maintained since. As the various companies have shown interest Van Ert and Cousins have leased them to the companies. Silver Standard’s March 22, 2016 report shows lease terms include payments of $710,000 for a three year option and several million up to the start of production.

Tom Budlong is the Desert Committee’s coordinator for the Inyo and Panamint Ranges. He travels widely in the desert and is active in Off Road Vehicle and Mining issues..