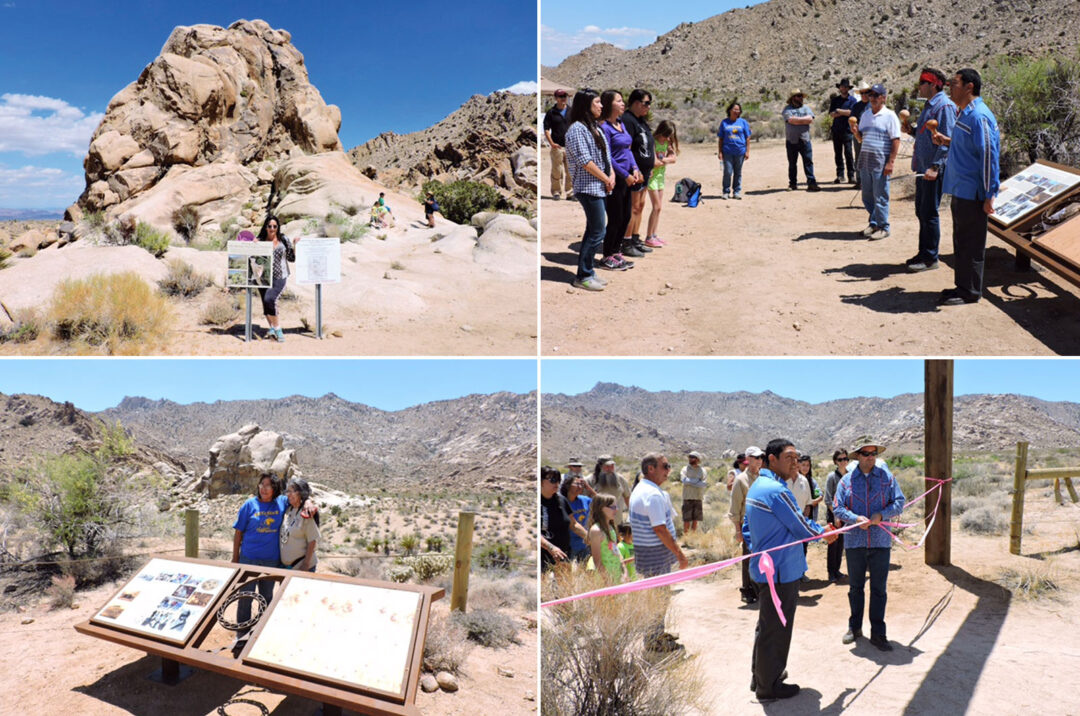 Lane Mountain Milk-vetch – Back from the Brink, or Not?

In April 1985, botanist Mark Bagley and his field crew were picking their way across the bajadas of Area B, on the Army’s Fort Irwin National Training Center (NTC) north of Barstow when they stumbled upon a plant species that hadn’t been seen in 44 years: it was the enigmatic Lane Mountain milkvetch (Astragalus jaegerianus). This unusual plant has a perennial taproot, but its herbaceous above-ground stems and leaves wither away each year with the summer heat. After several days of surveys, they found a total of 87 plants – each one of them nestled under another desert shrub, with their characteristic lavender flowers and fine grey-green foliage peeking out over the top. (photo 1, above) They likened the surveys to an Easter egg hunt. While that part of the NTC was subsequently placed off-limits to training exercises to protect the population, the rediscovery of this milkvetch initiated a series of events that has eventually made it one of the best-studied plants of the Mojave Desert.

With an interest in expanding the training capabilities of the NTC, the Army funded additional surveys over the next 15 years, along with companion studies to characterize the habitat the species is associated with. Those surveys found hundreds of plants within a few miles of the original rediscovery, both on NTC land and adjacent Bureau of Land Management (BLM) land. Three populations, named Goldstone Brinkman, and Paradise, now comprise the northern half of the range of the species.

However, the original location descriptions left by Jaeger and Munz, in 1939 and 1941, respectively, were vague enough to leave the impression that additional populations might be waiting to be found. Sure enough, in 1991, after a weekend of fruitless scouting additional BLM lands, Ray Bransfield and I paused for one last pit stop on Coolgardie Mesa before heading home; there at his feet within hollering distance of Lane Mountain was the milkvetch. Subsequent volunteer surveys by the California Native Plant Society, followed by more Army-funded surveys, led to the circumscription of the largest population of Lane Mountain milkvetch, both in numbers of individuals and in area it covers. Coolgardie Mesa comprises the southern half of the range of the species. (photo 2, below)

It was hard not to wonder, with so much habitat surrounding the four populations that looked perfectly suitable for Lane Mountain milkvetch, why the milkvetch did not occur in even more areas. Why was it here but not there? To try to answer this question, the Army funded research that followed two lines of inquiry. First, find out more about the physiology of plant itself, which might give clues about its habitat requirement. Secondly, quantify characteristics of the habitat where the milkvetch is found and compare them to characteristics of adjacent habitat where it is absent. Researchers at UCLA determined that the species has leaves that are typical of full-sun desert leaves; in other words, it is not using the host shrub for shade. Instead, the host shrub supports its thin, twining stems and possibly offers protection from herbivores. (photo 3, below) Additionally, this species, like some other species of legumes, is a nitrogen-fixer, and thus likely provides a benefit to the host shrub.

Other research focused on the plant’s seed and germination characteristics. While seed production and viability appeared sufficiently high and germination easy to achieve in a greenhouse setting, germination and establishment in the field appeared to be rare events. Coupled with field observations of individually-tagged plants over a series of years, we have come to understand that individual plants can be long-lived, given suitable climatic conditions, and even survive a few years of drought. However, seed germination and establishment events do not occur – or at least in the last few decades, have not occurred – very frequently. Not only is the amount of winter rainfall important, but the timing is crucial. In addition, windy spring conditions can contribute to mortality of fragile seedlings and juveniles.

The habitat where Lane Mountain milkvetch occurs typically consist of coarse, shallow soils derived from Jurassic or Cretaceous granitic bedrock (non-geologists just say: “Look for white substrate!”), though a portion of the Coolgardie population is underlain by diorite or gabbroid bedrock. Most individuals have been found between 3,100 and 4,200 feet in elevation, with plants dropping out at lower elevations, likely due to too-fine soils, and at higher elevations due to lack of soils (too rocky). The surrounding plant community comprises a high diversity of desert shrub species and the milkvetch makes use of most of them as host shrubs, with the exception of creosote bush; the spacing of the creosote bush’s branches is not close enough to support the milkvetch and it typically grows in sites with an accumulation of soils that are too silty for the favored host-shrub species. A solid habitat characterization for the milkvetch, however, remains elusive. While it is easy to eliminate from consideration areas not on suitable soils and within the known elevational zone, it is puzzling that areas adjacent to known populations don’t support the milkvetch. And surveys conducted in what might seem to be suitable sites in farther-flung areas of the Mojave Desert have not turned up any other populations.

The U.S. Fish and Wildlife Service proposed the milkvetch for endangered status in 1992 because of threats to the habitat primarily from expansion of military activities and small numbers of individuals. By the time the Service published the final rule in 1998, they also recognized mining activities, off-highway vehicle activity, and the potential threat of fire and fire suppression activities as additional threats. In those intervening years, not only were surveys, research, and monitoring being conducted, but both the Army and BLM had initiated landscape-level planning processes that would have a bearing on the future of securing habitat for Lane Mountain milkvetch. The Service had not designated critical habitat at the time of listing because it contended that the designation would provide little additional benefit beyond the listing. However, the Service settled a legal challenge from Center for Biodiversity and California Native Plant Society to designate critical habitat and published its finding in 2005. By that time, the Army had consulted with the Service on a boundary adjustment to allow for expanded training and also completed an Integrated Natural Resource Management Plan (INRMP) for the NTC.

Together, these two processes established two preserve areas and a third limited-use area that encompassed 8,000 acres of habitat for Lane Mountain milkvetch, along with prioritized funding for conservation-related projects (including the purchase of private lands to consolidate management), annual monitoring and adaptive management of populations on base, and long-term monitoring of the milkvetch throughout its range. (photo 4, below) In the meantime, the BLM had completed its planning process, known as the West Mojave Plan (WMP). The WMP established two areas of critical environmental concern (ACEC); one large ACEC encompasses the entirety of the Coolgardie population of milkvetch, and a much smaller one that directly abuts one of the preserves on NTC. The ACEC designation included prescriptions for such actions as route reduction, withdrawal of lands from future mining and fencing and signing as necessary for public education. While the NTC lands were exempted from being designated as critical habitat due to a 2004 amendment to the federal Endangered Species Act addressing Department of Defense installations with approved INRMPs, the BLM lands were excluded from critical habitat due to a finding that their conservation measures would be effective. Therefore, the Service designated zero acres of critical habitat.

This designation was challenged by Center for Biodiversity in 2007. By the time a revised designation was ready for publication, other court cases had caused the Service to shift its policies regarding critical habitat: the Service was now required to designate critical habitat even if effective conservation measures were being implemented. Therefore, in 2011, the Service designated approximately 14,000 acres of habitat, primarily on BLM lands that had been included in the two ACECs, along with several hundred acres of Army lands that are not within NTC boundaries.

Now that the Service has designated critical habitat, the Army is implementing the INRMP and has acquired private lands, the agencies are monitoring the status of the Lane Mountain milkvetch, and various researchers have conducted several studies, how is this federally listed endemic species faring?

Connie Rutherford is a biologist employed by the US Fish and Wildlife Service.