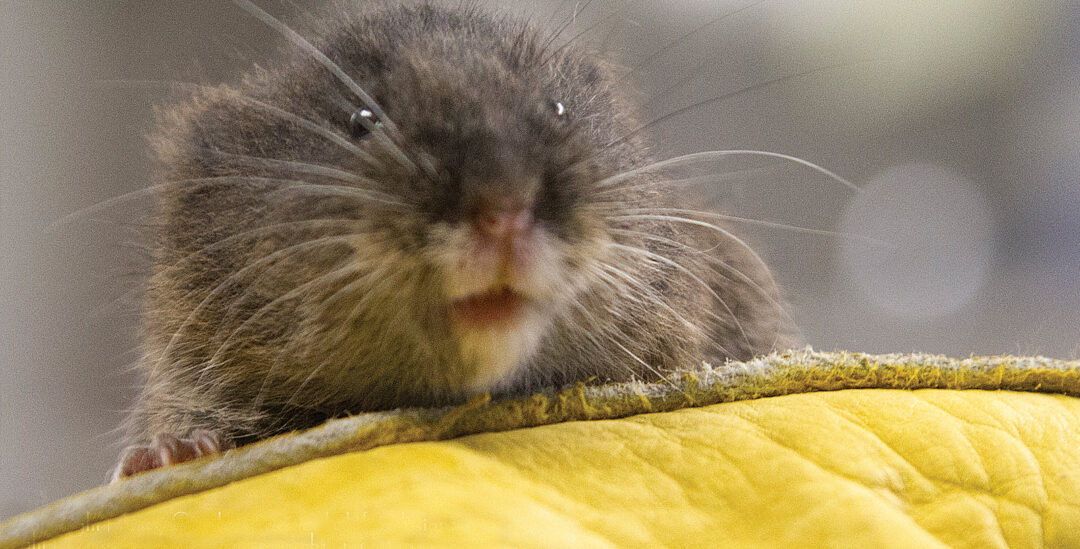 Bringing a Tiny Mammal Back from the Brink   |   by Tanya Henderson   |

“What is a vole?” That is a question that I often hear when telling people about the Amargosa Conservancy’s work on behalf of the Amargosa Vole. Voles are small (larger than a mouse, but smaller than most rats), stocky, short tailed rodents, closely related to lemmings and muskrats. The Amargosa vole (Microtus californicus scripensis), is a unique subspecies of the California Vole that lives in the marshes around Tecopa, CA and happens to be one of the most endangered mammals in the United States. The follow up question is often, “Why should I care?” There are many answers to that question but the answer that seems to win over the most people is a picture showing of the voles with their little white beards contrasting with their overall cinnamon colored fur. There is power in cute.

Amargosa voles were first discovered in Shoshone, CA and formally described as a species in 1900. Before it was even of legal age this vole was deemed extinct in 1917. Less than twenty years later they were rediscovered near Tecopa. They are currently restricted to about 75 acres of suitable marshland habitat dominated by three-square bulrush (Schoenoplectus americanus/Scirpus olneyi). Unfortunately that 75 acres is divided into about fifty-five individual patches with only marginal connectivity, ranging from just north of Tecopa Hot Springs to Tecopa. Natural rarity and habitat degradation led to their listing as an endangered species by the state of California in 1980, followed by federal listing four years later. It took over a decade for the Amargosa Vole Recovery Plan to come out in 1998, but even then, there was so little known about the species that the plan had to infer things as simple as diet and reproductive cycles from what was known of similar species. And there the voles stayed, their Recovery Plan archived on a shelf, and the voles themselves left lingering in their desert marshes growing their little Rip Van Winkle beards for the next decade.

In 2009, Tammy Branson, a new California Department of Fish and Wildlife employee from Bishop, was curious about the state of this endangered species on her beat. She obtained a grant to do species surveys. When she got out in the field and started looking at the voles she noticed a strange orange substance around damaged ears and genitals. She quickly contacted the Department’s Wildlife Investigations Lab and started a chain of events that snowballed into today’s lengthy list of people passionate about the vole.

Since 2009 a multi-agency team has coalesced around the newly-recognized Amargosa vole crisis. Dedicated wetland scientists, wildlife ecologists, wildlife veterinarians, and other specialists have dedicated themselves to better understand basic species biology and behaviors, to identify the processes shaping the vole’s habitat, to measure how closely the vole balances on the edge of extinction, and to define what we must do to bring it back from that edge. Researchers learned that the orange-tinged skin infections were not caused by a fungus, as initially described in the field, but a chigger (Neotrombicula microti). Demographic studies have shown that voles are not only vulnerable to disease but also predation, erosion of genetic variability, habitat loss, and local extirpation.

Loss of habitat is perhaps the greatest threat of all for this riparian-obligate desert dweller in an age of climate change and water scarcity. The entire range for the species is less than 75 disjointed acres, pieces of a larger marsh system offering suitable patches but with limited connectivity. The vole depends entirely on the three-square bulrush, which in turn only grows where water comes to the surface. Because the entire range of the vole is confined to a few small area with limited connectivity the question arises of what happens if there is a catastrophe in the only place on earth where the Amargosa vole lives? Unfortunately, the vole team gained some first-hand knowledge of this when “Marsh 1,” former home to the healthiest, densest population of voles, experienced a sharp drop in water level and pretty much dried up. By January 2012 only a thin ribbon of living bulrush remained along the stream flowing from the Borehole Well, and dead bulrush duff created by the die-off retarded plant regeneration in a 5 acre “dead zone, even after the water level was restored.” Scarier still, estimated population levels fell below 100 individuals and researchers estimated that the vole had an 82% chance of going extinct within 5 years if intensive management action was not taken.

This population collapse provided the impetus for creation of a three-part management approach to help save the species:

By June of 2015 all three of these initiatives were being implemented. The University of California Davis has created an active breeding colony that is producing excellent information about the social and reproductive behavior of this seldom observed species. Excessive bulrush duff has been removed from Marsh 1, and water levels are being carefully raised to replicate pre-collapse conditions. And active restoration of vole habitat in Shoshone is taking place prior to re-introduction of the Amargosa Vole.

The Shoshone habitat restoration would not be possible without conservation champion and local landowner, Susan Sorrells, agreeing to use a portion of her land in the Shoshone spring complex to re-create historic habitat conditions for the vole. Because the original specimen collected for museum records was from Shoshone, we know the Shoshone Spring habitat lies within the vole’s historic range. And because the spring system in Shoshone is an independent source of water, a “lifeboat” population of voles established here would hopefully be unaffected by changes in the Tecopa marsh system.

Both the California Department of Fish and Wildlife and the US Fish and Wildlife Service have awarded partnership grants to make the Shoshone restoration project happen and all organizations and agencies that are a part of the vole team have donated time and logistical support. The funds and support are going to the clearing of two plots that total about 1/2 an acre, opening up space to begin to re-grow marshes that will be connected by a corridor of bulrush. After clearing the Shoshone plots of overgrowth and dead plant material, it became apparent that where there is water, sunlight, and a remnant population, three-square bulrush will return. Usually the first species that grows after a clearing is not what you want to see, and we are battling some cattails in the cleared areas, but the bulrush is EXACTLY what the voles need to thrive. They use dead bulrush duff to tunnel and nest in, and they depend on the live bulrush for cover and sustenance. The lower marsh has proven especially wet and able to host bulrush. So, after over 50 people have contributed more than 800 person-hours in planning and clearing out over 400+ cubic yards of undesirable vegetative slash, we now just have to wait on the bulrush to grow. It really is exciting to watch the “grass” grow! And while we watch the green growth in the lower plot, we are actively plotting how to return spring water to support bulrush in the upper area.

While the bulrush grows, we will be creating access trails and interpretative signs. Visitors, whether they come once, once in a blue moon, or once a day should have a ready reference for understanding not only the vole and the bulrush but the entire spring system they depend on. Part of this is understanding how interconnected and far reaching the Amargosa Basin watershed is. From Yucca Mountain, to the Spring Mountains, to the terminus at Badwater, the system feeds numerous springs and seeps that host endangered, endemic species, like the vole, but also pupfish and spring snails. The majority of what feeds these surface water sources is not local precipitation or run-off, but water from a deep carbonate aquifer that takes time (on a geologic scale) to recharge. Unfortunately, overdraft of groundwater by our Nevada neighbors and those who wish to develop at a large scale here on the California side of the line, could ultimately reduce the flow of down-gradient springs in the Amargosa Basin which could affect the existence of the spring dependent species that live nowhere else. As a small non-profit, non-government affiliated environmental agency based out of Shoshone, CA, the Amargosa Conservancy is in prime position to not only manage the vole habitat restoration in town, but to watch the water use in the area and seek to address these overdraft conditions and restore balance to the system, ensuring that springs continue discharging at levels sufficient to provide habitat for the vole. We hope to return the vole to Shoshone in the next couple of years, but don’t wait until then to swing by Shoshone and watch the “grass” grow with us.

Tanya Henderson first passed through Shoshone in 1999 and remembers little more than a refreshing Cactus Cooler. Since then she has worked with the Student Conservation Desert Restoration Corps, and after some interval is now thrilled to call Shoshone home. She is the Stewardship Program Manager at the Amargosa Conservancy.