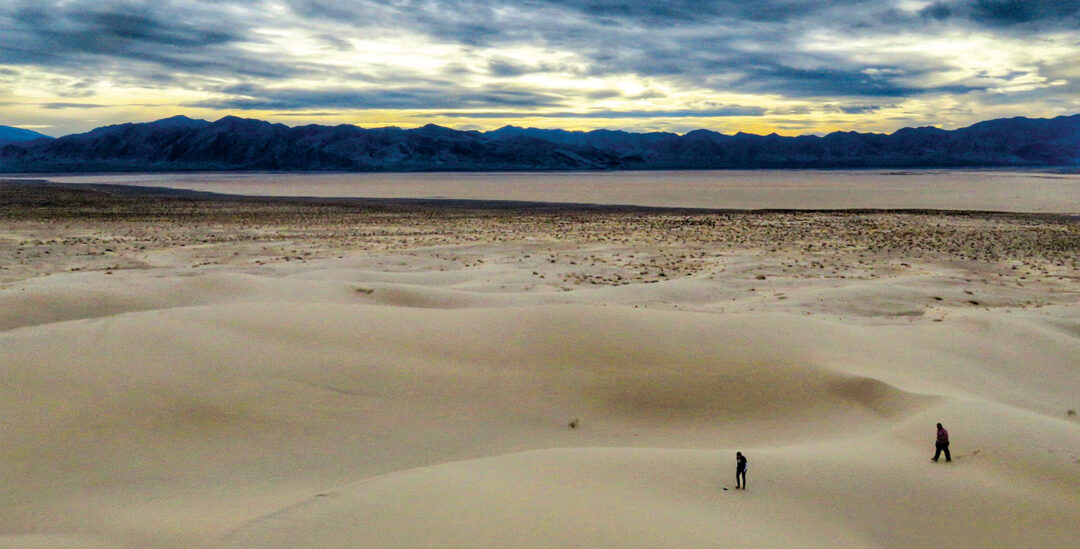 By Patrick Donnelly   |  Native American nations, Nevadans, and public lands lovers across the country are in opposition to the proposed land seizure by the U.S. Air Force of the Desert National Wildlife Refuge. With newly introduced legislation pending, it appears the multi-year campaign to save the Desert Refuge is headed for a showdown.

But what will the maps look like when the dust settles?

Photo above: The Desert Valley sand dunes are a favorite destination for a wild adventure in the heart of the Desert Refuge. Photo by Patrick Donnelly.

Desert National Wildlife Refuge is the largest wildlife refuge in the Lower 48, preserving some of the most pristine habitat in the Mojave Desert. At 1.6 million acres, it is a vast protected area encompassing various landscapes and provides a critical haven for the desert bighorn sheep and the Mojave desert tortoise. It was protected by President Franklin Delano Roosevelt in 1934 and as such has been entirely free of human disturbance for almost a century. It is one of the most remarkable and wild landscapes in the desert Southwest.

An Air Force proposal threatens to shut out the public and harm this gem. The Air Force already has secondary jurisdiction over about half of the Desert Refuge, much of it as overflight zones and missile launch buffers. This secondary jurisdiction means that the area is closed to the public and used for military operations, although US Fish and Wildlife Service retains primary jurisdiction, meaning the land’s primary purpose is the conservation of wildlife. However, the Air Force does already drop bombs on roughly 100,000 acres of that shared management area.

Now, the Air Force wants to take over approximately 1.1 million acres of the Desert Refuge, banning the public and mostly shutting out wildlife management agencies. They would build new roads and runways, conduct “irregular combat exercises,” and make other substantial alterations to the pristine refuge.

Led by groups like Friends of Nevada Wilderness, the Sierra Club, Defenders of Wildlife, and the Center for Biological Diversity, a coalition has worked under the banner of #DontBombTheBighorn to oppose the proposed bombing range expansion.

In early 2018, 32,000 comments from around the country were submitted in opposition to the expansion, responding to the Air Force’s Environmental Impact Statement. In 2019, the Nevada Legislature passed a resolution opposing the expansion, with a 58-3 vote. More than a hundred people attended legislative meetings to testify against the expansion. Last fall a delegation of eleven Nevadans traveled to Washington, D.C., to lobby members of Congress on the issue.

Nevada’s Native American nations also have been actively opposed to this expansion. The Desert Refuge includes vital cultural sites such as petroglyphs, agave roasting pits, pictograph caves, and habitation sites. The refuge harbors a large population of desert bighorn sheep, which the local Paiute tribes regard as part of their family. At one time, the area was a part of the Moapa Paiute reservation before it was drastically reduced in size. Local indigenous communities feel a close connection to this landscape. In 2018 the Moapa Band of Paiute Indians passed a tribal resolution opposing the expansion, and the Las Vegas Band of Paiute Indians passed a similar resolution in 2019.

To cede such a large swath of refuge land to the military means that our wildlife refuges are not protected at all ― they are simply an interim designation until someone comes up with a better use for them. This coalition is fighting not just to protect the bighorn sheep and Nevada’s public lands, but to take a stand for refuges across the country.

Nevada Sen. Catherine Cortez Masto’s new bill, S.3145, is a mixed bag. The draft legislation, introduced just before Christmas, would expand the bombing range by approximately 100,000 acres. That includes roughly 50,000 acres of refuge land and 50,000 acres of Bureau of Land Management land. This is dramatically less than what the military requested. It would also allow the military to build signal threat emitters — essentially mobile radio towers — in the shared management area. However, it retains primary jurisdiction over the shared management area for Fish and Wildlife Service.

Cortez Masto’s bill would designate 1.3 million acres of the Desert Refuge as federally protected Wilderness. While the area is already de facto wilderness and is managed as such, this would formalize such management. And while little would change on the ground as a result of this designation, it would present a significant obstacle to the military should they decide to again try to take over part of the wildlife refuge in the future.

There is some urgency to get a final piece of legislation hammered out because of the looming deadline of the National Defense Authorization Act. This annual, must-pass military spending bill is likely to be the vehicle for the Desert Refuge legislation. The military’s withdrawal on the bombing range must be renewed every 20 years and is set to expire in 2021, so whether or not they get their expansion, there will be legislation addressing the bombing range in some capacity in the next year.

Sen. Cortez Masto’s legislation has drawn mixed reviews from activists. From the Center for Biological Diversity’s perspective, while we are glad that the senator does not propose giving the Air Force all that they’ve asked for, we are opposed to transferring National Wildlife Refuge lands to the military under any circumstances. Therefore, we do not support the legislation. If the military gets 50,000 acres of wildlife refuge every 20 years, eventually we won’t have a wildlife refuge. However, for other conservation groups that prioritize wilderness designation, the legislation is seen as a boon because it adds significant acreage to Nevada’s wilderness preservation system.

The senator’s bill is not the end of the discussion. The military is circulating their draft legislation, and it’s unclear what a showdown in Congress might look like. Given the compressed legislative schedule of an election year, there could be significant developments on this issue by the time Desert Report readers see this article. Public lands lovers would be wise to ensure that their federal elected representatives know that they support protection of the Desert Refuge. This is a national issue. All of our wildlife refuges are at stake.