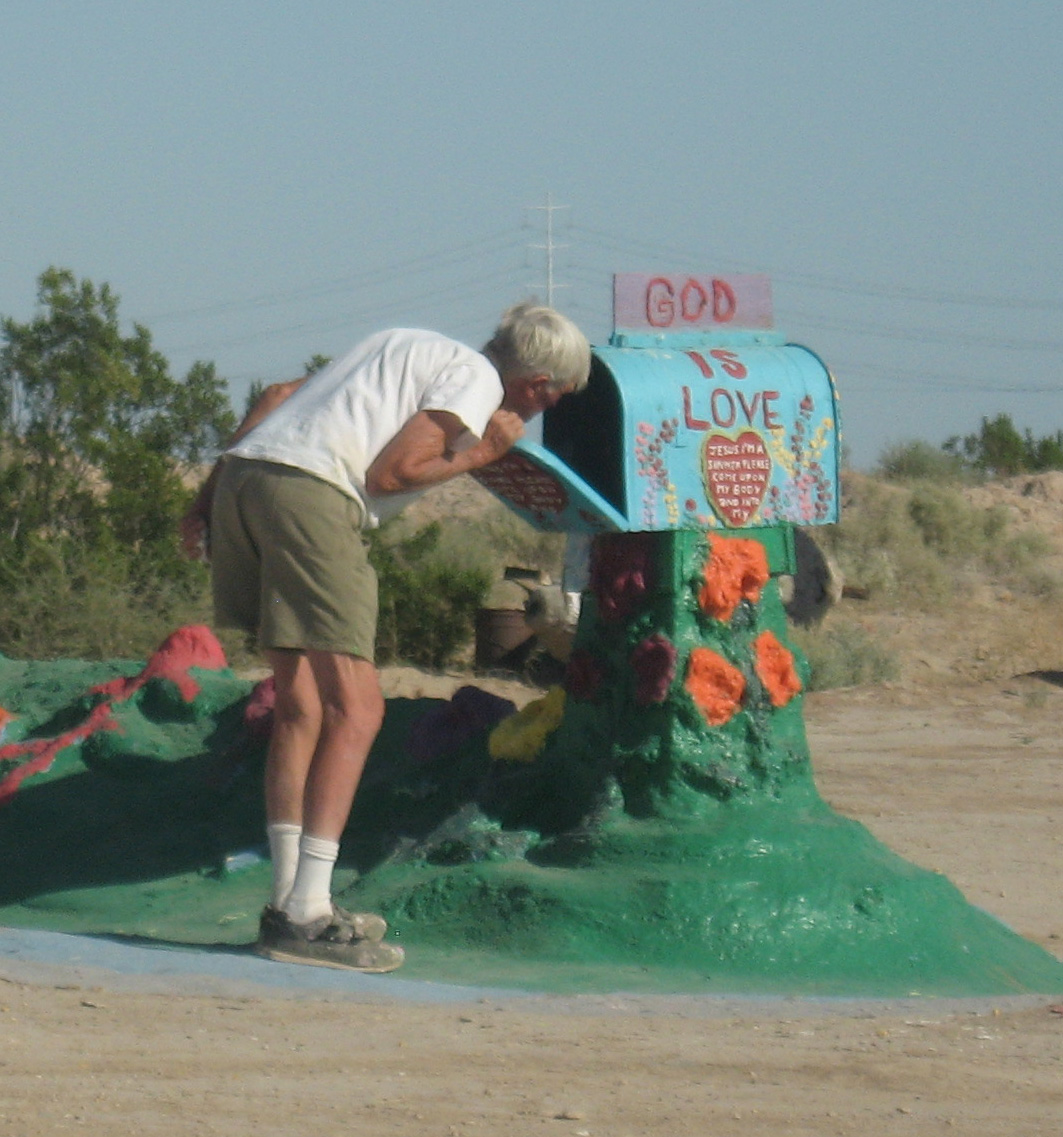 In the Desert: About a Mountain, About a Man

This is the story of a lone desert mountain, a hill really, less than an acre in size, located in California’s Imperial County in the Western Sonoran/Colorado Desert. It is not far from the old shoreline of ancient Lake Cahuilla, and is now just a few miles from present-day Salton Sea.

This, too, is the story of a man who brought his vision to that remote desert hill many years ago, and camped by that mountain, just down the road from the tiny, mostly abandoned town of Niland and adjacent to an area popular with winter campers known as Slab City. He began to paint his vision onto that lonely desert hill, until his vision began to spill out like a Technicolor dream across the desert’s barren folds, in a lonely land once abandoned by geology and time.

Salvation Mountain is an ambitious, decades-in-the-making art installation comprised of adobe, straw, thousands of gallons of household paint, tires, tree branches, broken glass, plastic, and many other recycled everyday materials, along with Bible verses and endless reminders that “God Is Love.” The site is locally and internationally famous, and was designated in 2000 as “a folk art site worthy of preservation” by the Folk Art Association. California Senator Barbara Boxer, who entered the mountain into the congressional record as a national treasure, has described it as “a unique and visionary sculpture…a national treasure…profoundly strange and beautifully accessible, and worthy of the international acclaim it receives.”

I first visited Salvation Mountain in 2006. I saw a squat, rounded, 100-foot high mountain painted in glorious, vivid colors, complete with a cross on top and the words “God is Love.” Leonard Knight, a lean man well into his 70s, dressed in his hallmark white t-shirt and khakis, rushed up and enthusiastically greeted me, offering a tour of the mountain. “I am excited that you are here,” he said. “I am anxious to share with you what I’ve built here and what I’m working on now, and to get my message out to the world about love.”

He showed me a giant, several-story high replication of Noah’s Ark that he was in the process of building, complete with hundreds of tiny windows, and led me into an exquisitely crafted and decorated chapel at the base of his mountain. He led me through walkways and corridors, pointing out endless details and embellishments he had painstakingly added to his mountain panorama. He had first come and started to paint and decorate the mountain in the 1980s, and had been there ever since. There were flowers and there were windows and there were enough compelling artistic details to rival any art museum in the world.

What was even more astonishing were two facts that he shared with us: he used only recycled materials that visitors donated to him or that he found in trash dumps across the desert – used tires, old building lumber and housing materials, leftover house paint, all kinds of household items and goods people didn’t want anymore, etc. And, unbelievably, Knight worked primarily by himself and lived at the site alone, through winter cold and extreme summer desert heat, camping in his truck. Certainly, every time I visited the Mountain, Leonard was hard at work, or giving people tours.

How could this be? How could one man create such a vivid story, one that lives on in the annals of California desert fable and lore in the wake of his death this past February at the age of 82? Perhaps it was the perfect marriage between the power of the desert landscape itself and Knight’s unique and infectious energy and dedication to his vision, to his art. His enthusiasm and energy were unmatchable.

Beloved American author John Steinbeck called attention to the power of the California desert’s special healing and spiritual powers in his memoir, Travels with Charley, written in 1960 at the height of the Cold War and atomic threat era. After stopping on a desert road in his solo travels through the Mojave, he wrote about the sacred energy of deserts: “In such a place lived the hermits of the early church piercing to infinity with unlittered minds. The great concepts of oneness and majestic order seem always to be born in the desert.” I can’t read this passage without thinking of Leonard Knight, a late 20th Century desert visionary, a holy man in his own right.

Countless people have visited Salvation Mountain over the years, or learned of Leonard Knight and his electric mountain through what visitors have shared through social media in the last decade, giving his vision and story an exponentially mounting level of momentum. In fact, he’s even inspired a group of artists from the younger generation: around the corner from his mountain, on an adjacent hillside, a whole new spread of artwork has been unfolding for the last few years.

I visited Leonard Knight many more times after my first visit in 2006. Usually, there were many other visitors there, too. One time, filming was taking place for the cult classic “Into the Wild,” which features a cameo of Knight at his mountain. In 2010, shortly after the death of my fiancé, I visited the mountain with a group of poets from Riverside, and I stayed in the car with the air conditioning on. The heat was getting to me, and I was feeling a little sad. Knight came right over, and chatted with me for a few minutes, offering me something cold to drink and thanking me for coming out to see him.

I don’t know really how long we talked, or how long I was there, but even though it was probably only an hour or so, it feels now like a soothing eternity. Time, at Salvation Mountain, and especially in Leonard’s presence – in the dozen trips I took there, he was always there, and according to those who knew him well and spent lengthy amounts of time at the site, he rarely left – slowed down considerably and became irrelevant. It was a pleasure to remember what it means to just sit in the wide, open desert, absorbing its healing presence. This is something I’ve savored doing all of my life, although it seems to have become harder to do in recent years, for personal reasons and because of pressures on the desert coming from powerful, outside sources.

Since that time, which turned out to be my last visit to Salvation Mountain, and the last time I saw Leonard before he died, the landscape of the desert itself has taken many unfavorable hits. The impact of the “Solar Gold Rush” – the race to bombard the California and southwestern deserts with a checkerboard of massive wind and solar technology zones – has hit full force, and there has been much more to be sad about in the face of this.

And now, more than ever, the enduring legacy of Leonard Knight’s beloved mountain has become a visual and metaphoric symbol of just how precious and rare our deserts are. In this case, the desert, with its mother lode soul, has been able to help birth and sustain one man’s vision of remembering what’s most important in life in the end: beauty, community, and love. The desert has a special gift to remind us of that, and Leonard rendered this prolifically.

And what’s important to me now, as the fate of Salvation Mountain hangs in the balance—now that Knight is gone, as is so much of what else is precious and sacrosanct in the desert, as the early years of our new centennial tick forward—is this: I circle back around in my mind and heart and imagination to remember something Leonard once told me.

“Imagine this,” he said. “If everyone stuck in a traffic jam on the freeway in L.A. just got out of their cars, and shook each others’ hands, and smiled, and shared a little bit of love with one another that way, instead of honking and getting mad, just imagine how much better the world could be that way.”

Indeed. And now, when I’m stuck in traffic, or when I’m frustrated and saddened by yet another California desert destruction story in the news – big solar, big wind, unethical water transfers of rare and precious desert aquifers, bird deaths, loss of sacred desert habitat, gold-digging multinational corporate interests – I allow my mind to wander to the vivid dream of Salvation Mountain, with its colorful dreams and promises, and I am renewed.

And just thinking about it, about Leonard Knight and his devotion to lighting up the world from a once-forgotten corner of the desert with sincerity and hope, and to encouraging every visitor who made the pilgrimage out to Salvation Mountain to see things for themselves, and to take a minute to stop and remember what it means to be human, and to remember that the desert is, truly, the one most distinct geography that “mothers miracles such as this” as Steinbeck wrote, I instantly begin to feel better.

Ruth Nolan, M.F.A., a lifelong resident of California’s deserts, is Professor of English at College of the Desert in Palm Desert. She is editor of No Place for a Puritan: the literature of California’s Deserts (Heyday Books, 2009). An avid California desert defender and scholar, she is also a widely published poet and writer. She writes about the desert for KCET Artbound Los Angeles, Heyday Books, the Riverside Press Enterprise, and for many poetry and literary magazines. She worked as a wildland firefighter for the BLM California Desert District during the 1980s.