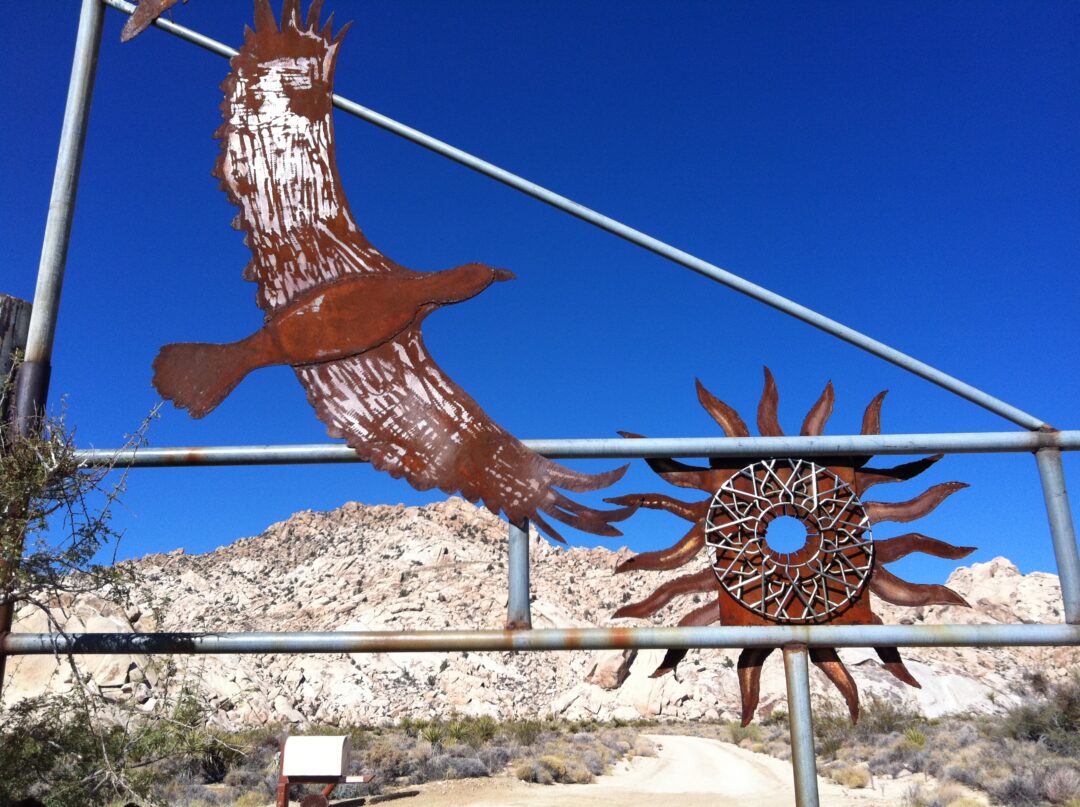 For the Desert: What We’ve Lost, What We Remember, Where We Gather, Where the Eagle Rises

In June, 2012
I saw three golden eagles
on the morning and following
morning of the long, split moon night
of a night-long mourning ceremony
sponsored by Kumeyaay Indians
who for centuries, along with
Quechan and other desert people
have called this desert home
and who mourn the desecration
of sacred desert land, the blading
of old growth Ocotillo and desert
floor and ceremonial places for
a 40-story-high wind farm zone
with blades that kill desert birds,
making circles that fly nowhere
and sluice the desert heart apart
into more broken pieces than two

In June, 2012
I saw three golden eagles
along the long highway
on my way to the ceremony
on the morning of the night
of a night-long mourning ceremony
for the eagles being killed,
for the turtles being killed,
for the tall Ocotillo being killed,
for all that is being sacrificed
in the name of renewable energy
in the name of “go green”
in the name of destroying things
and we’ve gathered to heal
the wounds in our desert hearts
to try to stop the bleeding
to try to staunch the wounds
on the sacred desert ground
and so, alone, I drove
and along
the way,
taking nothing with me
on my car’s dashboard
and moving into my own
form of road grief and prayer
I was blessed by birds. In June, 2012, I was a wreck. It felt like both my personal life and my beloved, lifelong homeland, the Mojave and other California deserts, were being torn apart. My only child, Tarah, had just left home for Ft. Lewis Washington, where she was drinking herself into a numbed stupor as a way to cope while my son-in-law Alex was on a year-long tour of Afghanistan with the Army. I was also reeling from the recent loss of my partner to suicide. My life was being jerked up and down by severe losses, and it had become more than I could bear; all of this paralleled the federal renewable energy land grab over desert lands I know intimately well, through my years, starting in childhood, of widely exploring, hiking, camping, exploring the California deserts, and later, working as a wildland firefighter for the BLM California Desert District.

In June, 2012
The first eagle
had landed in the center divider
of Interstate 60 in the Badlands,
and was waiting there
for me to arrive
and drive by.
He lifted slowly
when I approached,
then powered off
into the distant sky,
heavy with road kill.

In June, 2012, I was devastated to be experiencing, from an inside perspective, the onset of, metaphorically but actually pretty literal onset of heinous stage four cancer throughout the entire desert body. It was too much. I was grabbing onto hope beyond hope and trying to connect as my personal life in the desert – metaphorically and literally – was fragmented, falling apart, being destroyed, seemingly, by uncontrollable outside forces. For me, this is not “the other place” to go for kicks with somewhere else to go back to. This is home for me in the most profound and enduring and beloved way, and this is where my center is. Throughout my life, the desert has provided deep healing and inspiration and renewal no matter what challenges I’ve encountered in my life. The California and southwest deserts are also my academic and literary home; I’m a lifelong scholar and professor of desert literature, and also know the deserts intimately through the oral traditions and stories of the region’s indigenous peoples and a rich legacy of western and contemporary poetry and prose. But now, where was I to go?

And so I drove to the Mourning Ceremony in June, 2012, looking for much-needed community and healing within my own heart of hearts.

In June, 2012
the second eagle
was painted on the side of a big-rig
just a few miles down the road
on Interstate 10, huge.
It rode alongside me for miles,
with Santa Ana winds
gathering at our backs, larger
than life or windmills
And I passed the giant
blades of towers that behead
so many living things at the
hips and brow of the hills
of the open mouth
of the Colorado Desert
near Palm Springs

“This is not a protest,” Viejas Kumeyaay Chairman Anthony Pico made clear. Instead, he called for all of the hundreds of participants to come together in a time of “healing.” Viejas was one of several bands of the Kumeyaay nation represented; other San Diego bands included Barona, Sycuan, and Manzanita. Some traveled from out of state, such as those from the Navajo nation. Prayers were recited, followed by an all-night wake with ancient birdsongs and dancing to honor the generations of long ago whose consecrated ashes lie in the dust now being disturbed across the 12,500 acre Ocotillo Wind Express Project. Writer Miriam Rafferty, who attended, noted that “The mood was not one of anger, but of dignified resolve—a determination to unite all Indian nations and the public to understand the magnitude of what is being lost.”

In June, 2012
The third eagle
was a fine piece of art,
carved into the bolero tie
of Viejo Chairman
Anthony Viejo
in ivory white, every
fine detail of feather
chiseled like wind hearts
against the chairman’s throat
and holding together hope
with powerful wings
battling the destruction
of wind farms on the
sacred desert floor, of
places we cannot replace

Many of my desert-based friends and associates also attended the June, 2012 ceremony; these are people who I admire greatly for their perseverance and dedication to advocating for the desert and encouraging others to do the same. It was greatly comforting for me to see so many of my desert defender friends there, and to share in the ceremony’s power with them. I’ve gathered feedback from some of them on what the June 2012 Mourning Ceremony near Ocotillo meant to them.

Pat Flanagan is a desert naturalist, educator and science curriculum writer; she attended the ceremony, and says, “Shortly after I arrived, Chairman Pico came up to me and gently told me to search within my heart for comfort and healing during the ceremony. Passing along the olla and the two baskets made with thoughtful caring hands full of memories – after they were given to me at the end of the ceremony during a giveaway – anchored me in the place and into the stream of the bird songs. And I am glad I do not have them. The gifts and the giving were what opened my heart to be a conduit for the blessings and comfort that had poured out through the long night.”

Longtime desert defender and advocate Tom Budlong, who was also there, says: ” The project is unnecessary, economically unjustifiable, a violation of our own rules in innumerable details, and most of all, disrespectful of our Native American population. We sacrifice this spot, sacred to the tribes & precious to all visitors, without being clever enough to use the vast rooftop acreage available where the power from this project will be used. It is indeed shameful. The wake was a powerful ceremony. We could learn a lot about respect from it.”

In June 2012
I’m telling you this story
because it’s true
because all three eagles
flew above our heads
while the men shook rattles
and sang bird songs
all night long from sunset
to dawn, because we all wept
on the hill by the medicine wheel
when it felt like the sun had died

Terry Frewin, dedicated desert activist who coordinates and hosts many of the Sierra Club desert committee meetings, was also there. He says, “The experience of the Kumeyaay Ceremony touched all the bases (it is World Series time). I was very humbled to be invited and acknowledged, and experienced a profound sense of sadness, as well as one of hopefulness, as I saw the variety of folks, young and old, honoring their heritage and ancestors. Simply put, the experience of the ceremony strengthened my commitment to keep doing the right thing for the desert.”

Morning, and mourning
In June 2012
the sun soon grew too warm
and the wind refused to howl
so I held a small, handmade
basket in my hands
that was gifted to me
after it was gifted
to someone else
a small basket, so empty,
and so full of bird songs

Ruth Nolan, M.A., a lifelong resident of California’s deserts, is Professor of English at College of the Desert in Palm Desert. She is editor of No Place for a Puritan: the literature of California’s Deserts (Heyday Books, 2009). An avid California desert defender and scholar, she is also a widely published poet and writer. She writes about the desert for KCET Artbound Los Angeles; Heyday Books; the Riverside Press Enterprise; and for many poetry and literary magazines. She worked as a wildland firefighter for the BLM California Desert District during the 1980’s.