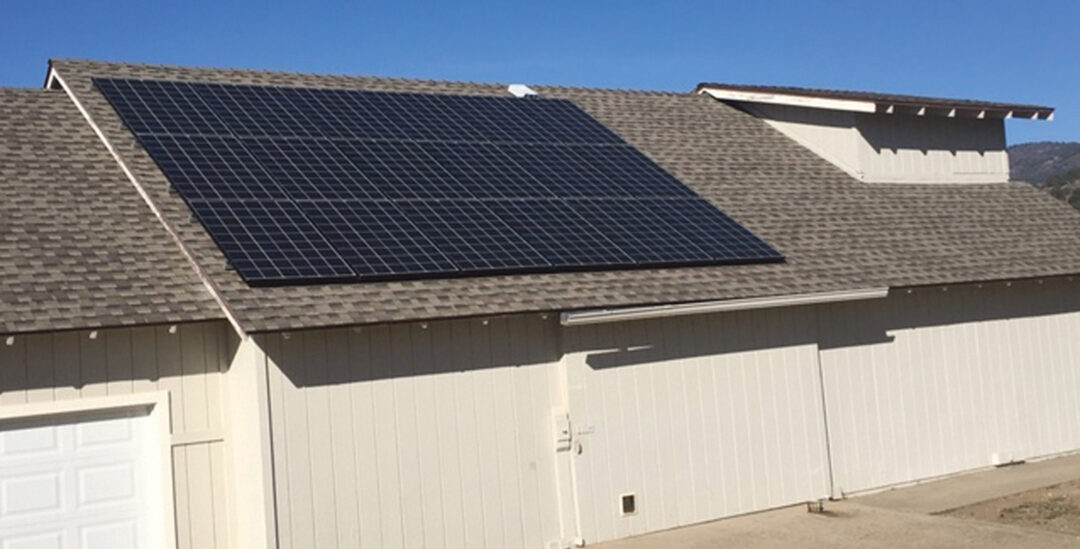 By Bill Powers   |   Rooftop Solar and Batteries are the Right Solution   |  The role played by equipment owned by California’s investor-owned utilities (IOUs) in California’s recent wildfires is front-page news in the state. It is important to understand how the electrical utilities have responded to high fire hazard conditions and to look at alternatives.

Photo above: The better solution. Photo by Bill Powers.

Unilateral curtailment of grid power to rural customers during periods of high winds and low humidity, a procedure used by San Diego Gas and Electric (SDG&E) for several years, has recently received plaudits in the press farther north. This approach limits utility liability under high fire danger conditions. However, it also leaves rural residents highly vulnerable, with no electricity to run: 1) critical water pumps to protect their homes and property, 2) life support systems for the elderly or infirm, or 3) refrigeration to prevent spoiling of food when access to supplies may be limited by road closures or other preventive public safety measures.

The missing piece to this utility strategy is back-up power that seamlessly replaces grid power, that has no safety risk, no fuel requirements, and that can operate as long as the high fire hazard condition exists. The critical missing piece to this safety puzzle is rooftop solar with battery back-up.

Backup generators are also a potential answer and are used by many rural residents. However, this answer brings with it other challenges. Potentially thousands of rural residents could be rushing to fill gasoline containers following a pre-emptive power shut-off, for which they received little or no prior warning, and then struggling to start little-used backup generators under stressful conditions (a potential fire hazard it its own right).

Rural San Diego County residents expressed their frustration with SDG&E’s handling of pre-emptive shut-offs, and with the back-up generator option, in these December 2017 e-mails to a county supervisor following the Lilac Fire in San Diego County.

“We have about 400 to 500 senior residents here (we are a 55 and older park); we need externally rented generators to keep our well water and sewage system operational; if we ever need to evacuate our park in the event of a catastrophe at night without power, then I am planning for many deaths, possibly my own as well as my wife and our pets . . . The whole thing is a disaster waiting to happen,” and “approximately 36 hours ago SDG&E proactively shut off power in our area to avoid risk of fire due to wind damage. We were not affected by fires, nor in their path. We have had almost no wind at all for the past 24 hours, and there is no damage to the lines, but still the power is out.”

Given the complete authority granted to the utility on when to shut off power to rural residents, and when to return power to these same residents, pre-emptive utility power shut-offs are not a complete answer to the fire hazard challenge. Rural residents must be equipped with a backup power system that seamlessly displaces grid power and can operate indefinitely without the user having to obtain or replenish fuel for a back-up generator (if they have one) at a critical point in a potential fire emergency.

SDG&E has long experience with firestorms. A hunter’s illegal fire started the 2003 conflagration. SDG&E’s equipment and tree trimming negligence were cited as the causes of the three distinct fires that made up the 2007 megafire. Many homes were destroyed, lives were lost, and billions of dollars in fire damage occurred. Fire insurance carried by SDG&E did not cover all of the pay-outs resulting from the 2007 fires. In January 2018, the California Public Utilities Commission (CPUC) denied SDG&E authority to collect from ratepayers $379 million in pay-outs the utility made beyond what its insurance covered.

Southern California Edison (SCE) and Pacific Gas and Electric (PG&E) may now be facing similar or greater financial burdens, with pay-outs far exceeding fire insurance coverage, if utility hardware is found to be a cause of the December 2017 fires in SCE territory or the October 2017 fires in PG&E territory.

Equipping rural customers with solar and batteries to address the pre-emptive power shut-offs has been recommended for a decade. All three of California’s IOUs initiated major distributed solar programs in 2008. For example, the CPUC authorized SCE to put 500 megawatts (MW) of rooftop solar on warehouses in the Los Angeles Basin. In recognition of the 2007 fires, another CPUC proceeding that defined the $250 million SDG&E solar program, urged that SDG&E use the money to equip rural customers with rooftop solar and batteries.

SDG&E chose a different course. In its application, SDG&E opted to focus on mini-utility-scale ground-mounted solar arrays in the 1 to 2 MW capacity range. The utility ultimately contracted for about 47 MW of solar projects under this program, built in rural areas of San Diego County and ranging in size from 2.5 MW to 26 MW.

There are approximately 10,000 rural electric meters in SDG&E territory, less than 1 percent of the SDG&E total of 1.4 million meters. Even at the time, a decade ago, $250 million would have been more than sufficient to achieve the objective of protecting all rural SDG&E customers in fire hazard areas from the negative impacts of pre-emptive power shut-offs.

A utility-funded project is not the only alternative. Net-metered solar systems are paid for or leased by the solar customer, not be the utility. The customer offsets energy use at the retail electric rate with this solar power. There is currently more than 6,000 MW of net-metered solar capacity online in the state. The spectacular drop in the cost of solar systems in the last decade has been a major driver behind this net-metered growth.

The spectacular drop in solar prices has been matched by a concomitant drop in the cost of battery storage systems. Recently, California IOUs have modified their on-peak/off-peak pricing periods to make net-metered solar less attractive financially. On-peak pricing, at $0.50/kWh or more, now occurs in the 4 pm – 9 pm window, when there is relatively little solar production. This means solar customers are sending power back to the grid when prices are low and consuming electricity from the grid when prices are high. This utility effort to make net-metered solar less economically attractive has incidentally made net-metered solar with batteries more economically attractive, as the batteries can shift the demand out of the high cost on-peak pricing window and generate considerable customer savings. As a result, individual customers, with no coordination with neighbors or the utility, can now save on electricity cost with commercial or residential “solar with battery” systems.

Distributed battery storage is also a viable project for a utility on the scale of thousands of customers. Green Mountain Power, an IOU in Vermont, in 2017 began offering retail customers 14 kWh battery storage units for a one-time cost of $1,500 or a lease of $15 per month. Green Mountain Power automatically aggregates the output of 2,000 residential battery storage systems to serve as a virtual peaking power plant and assure grid reliability.1 This is a profit-generating project for the utility. Given the continued rapid decline in battery cost, it is not unreasonable to assume these batteries could be given to utility customers by 2019 or 2020 and the utility could still make a profit by effectively managing the dispatch of the batteries. The presence of batteries in each residence assures that these homes have power if the grid is down for whatever reason. With commonsense emergency load management, 14 kWh of storage can last on the order of 24 hours in a typical home, with no battery recharge.

The net cost, adjusted for the federal tax credit, for a 6,000 watt rooftop solar system and 14 kWh of battery storage should be no more than about $20,000 in 2018, even for a single retail residential system. Using this cost metric, all of 10,000 or so of SDG&E’s rural customers could be equipped with solar and battery systems that would allow them to painlessly ride out pre-emptive utility power shut-offs for a total investment in the range of $200 million. This is about one-half the of the financial burden of $379 million that SDG&E must now absorb due to its negligence in the 2007 fires. Distributed battery, virtual power plant projects of this kind are not hypothetical. Tesla just announced a 50,000 residential Powerwall project in Australia that will produce up to 250 MW of grid support.2

Equipping all rural customers in designated fire hazard areas with solar and batteries is the best option for protecting these customers in a fire emergency. It is also the best way for the utilities to protect themselves from future liability where poorly executed fire hazard shut-offs would otherwise create major, and potentially catastrophic, problems for some customers.

Mr. Powers is a registered professional mechanical engineer in California with over 30 years of experience in energy and environmental engineering. He has written numerous articles on the strategic cost and reliability advantages of local solar power over large-scale, remote, transmission-dependent renewable resources, and he frequently appears as an expert witness on alternatives to conventional power generation infrastructure.