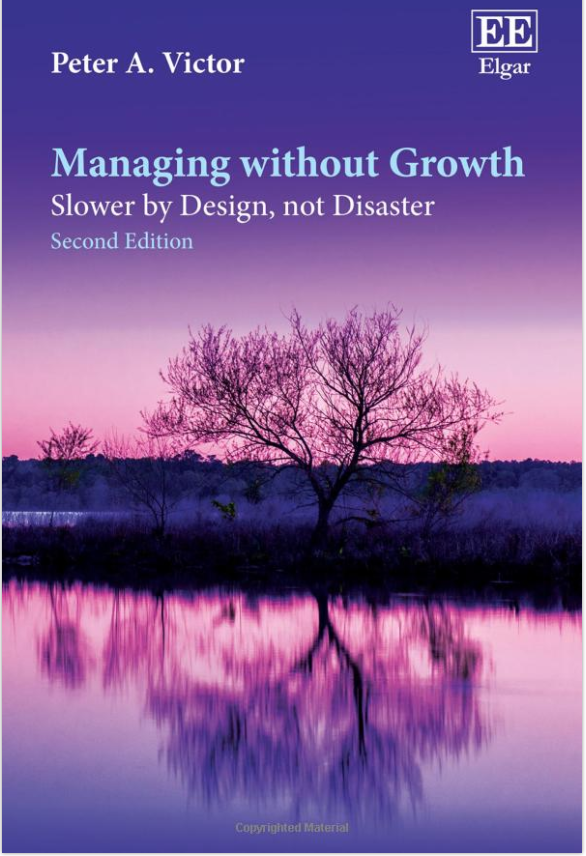 In 1967, when Peter Victor was studying economics at the University of British Columbia, he asked an unusual question: “How is it that a whole economy does this damage to the environment on which our lives depend?” The question was unusual because these were still the golden years of increasing economic growth and prosperity. Economic growth was defined as progress. The GDP was regarded as the most powerful number in the world. Environmental impacts were viewed and accepted as externalities; the unintended consequences of market transactions.1 In spite of this general worldview, Victor decided to pursue an investigation of how the economy and the environment are interconnected for his thesis.2

Victor’s quest to answer his question took him on a journey that straddled two very different disciplines: economics and environmental science. At least, they seemed very different. But it did not take long for Victor to understand that they were inextricably linked and how this came to be so.

During his university years his study focused on what he called “throughput,” which refers to the use of fossil fuels, materials, and biomass extracted from the environment, and the corresponding amount of waste returned to the environment. The sheer weight of materials that propelled the world’s economies increased 800% in the 20th century.3 The economic growth during that time was unprecedented.4  But Victor doubted that the planet could sustain economic growth at this rate.

In Canada and in other countries, Victor worked for fifty years on economic and environmental issues in various positions. He was Assistant Deputy Minister for the Environmental Science and Standards Division in the Ontario Ministry of the Environment and Dean of the Faculty of Environmental Studies at York University. He was the founding president for the Canadian Society for Ecological Economics.

Victor retired from York University in 2018 but actively continued thinking, talking, and writing about Ecological Economics. He remains deeply concerned about humanity’s future if we continue on the path we’re on. In 2008 Managing without Growth, Slower by Design, not Disaster was published (and a second edition appeared in 2019). This was followed by The Costs of Economic Growth (ed) in 2013, the Handbook on Growth and Sustainability (co-ed) in 2017, and Herman Daly's Economics for a Full World. His Life and Ideas (2021). Escape from Overshoot. Economics for a Planet in Peril will be published in 2023. Victor does not only address the environmental impact of continuing economic growth, but also whether economic growth improves people’s well-being. He explains that studies have been done showing that immediately after World War II, people’s happiness increased along with increases in the GDP but that happiness then leveled off in the nineteen seventies. Even though people’s average income increased, studies show that increased growth beyond a certain point does not increase wellbeing or make for happier lives.

In a telephone interview on May 5, 2022, from his home in Toronto, Ontario, Victor explained the concept of “overshoot” which he defined as, “the use of the planet’s resources in a way that takes us beyond what is sustainable.”  Although he has lived in Canada for many years, a slight British accent characterizes his speech. His voice takes on a tone of urgency when he goes on to say that “The rich countries are responsible for the overshoot or they oblige other countries to do the dirty work for them. The poorer countries’ responsibility is limited.” This has led him to focus much of his research on the richer countries.

In order to develop strategies to slow down or even decrease economic growth, he constructed various computer models. This allowed him to explore possibilities and simulate changes to see which strategies will have a smaller footprint on the environment while maintaining a decent quality of life within the limits of our biosphere. What he found was, that yes, economic growth can be slowed, halted even, while quality of life, broadly understood, improves.

But this raises other questions. Even though his research results support the feasibility of a reduced use of resources and consumption, would people be willing to accept a major shift in behavior, habits, beliefs, values, life style, and so on? Can there be a time when people do not view economic growth as essential to the functioning of a society? Will people be able to accept the necessity of this for environmental reasons? A transition in values is usually a slow process requiring a length of time that we may or may not have.

Victor sees a number of other issues that complicate slowing or decreasing economic growth. One of these is the close relationship between politicians and corporations. It appears to be common practice that politics favor business and support economic growth. Also many institutions, such as financial, political, educational, religious and so on, have developed within the context of a growing economy and have become integral to the functioning of our society. Firmly entrenched institutions tend to be resistant to change.

Another issue that concerns Victor is fragmentation and he explains, “We have Ministries of Natural Resources, the Environment and Finance, and they focus on their own priorities rather than on working closely with each other on a shared agenda. When knowledge is divided into different disciplines, it can make it difficult to understand and solve problems that are essentially interdisciplinary in nature.”

When I asked Victor about the trajectory we are on given the current global situation, I heard him sigh before he answered, “Currently it looks like we are continuing to maintain an emphasis on economic growth. What we are seeing for example, is an increasing gig economy, short term employment, lack of benefits for workers, and so on. Everything is sacrificed to economic growth. We hear a great deal about green growth, poverty sensitive growth, inclusive growth and so on. But these are just other ways to continue defending growth.”

Victor concludes, “If we give up economic growth as a priority we can look at what matters in life and shift the emphasis away from growth. That will be the beginning of a change.” He continues, “Covid has shown us that significant changes can happen much faster than we thought. People have understood the value of community, growing one’s own food, etc.” This gives Victor reason to hold on to his vision that it is possible to slow down by design, not disaster.

Birgitta Jansen has been an active volunteer in Death Valley National Park. Currently residing in British Columbia, she is a managing editor of the Desert Report, has written previously on a number of environmental topics, and has completed a book about the October 2015 flash floods in Death Valley NP.

An article written by Peter Victor will be published in the December issue of the Desert Report.