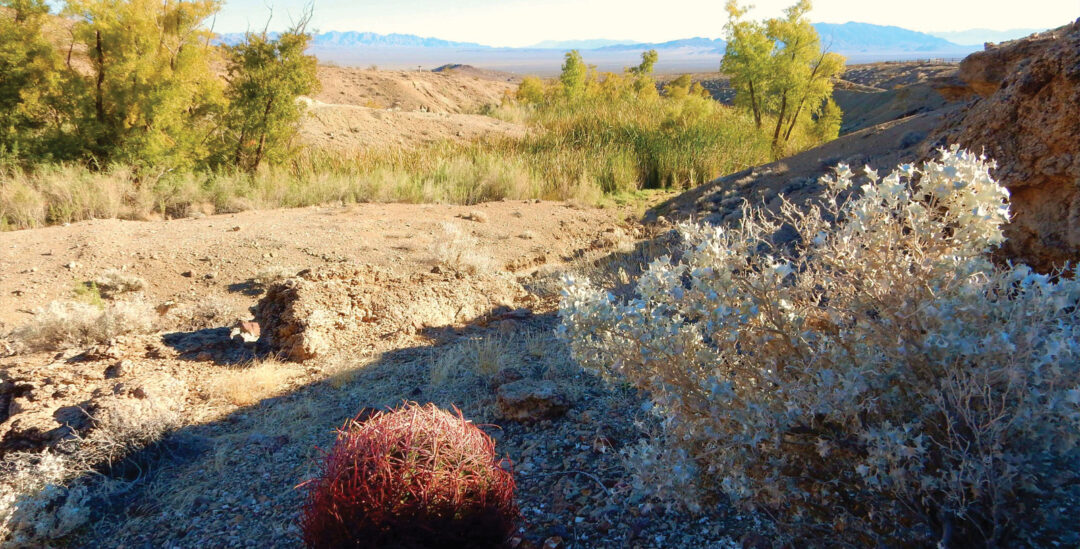 Desert Groundwater – A Resource at Risk

By Bill Christian   |   Groundwater stored in our desert basin aquifers is an increasingly valuable and scarce resource, sustaining both people and groundwater dependent ecosystems. Desert springs, where groundwater surfaces, are rare and easily threatened sources of water, critically important for a wide range of desert plants and animals. Perennial springs and seeps often serve as the only source of water for vast desert areas. Almost wholly dependent on the surface expression of ancient water moving slowly through groundwater aquifers, even small drops in aquifer water levels caused by groundwater pumping can desiccate a spring and decimate the life dependent on the spring.

Unlike surface water flowing in streams and rivers, groundwater has been largely exempt from allocation rules that would limit unreasonable extraction, leaving groundwater basins easy prey to the mining and export of water. The failure of regulatory regimes to recognize the obvious connection between surface and groundwater has posed major problems across the US Southwest in the management of water resources.

Photo above: Bonanza Spring in the Mojave Trails Monument is directly connected to an ancient, underlying aquifer. Photo by: Linda Castro

In 2014, recognizing the dire overdraft situation in many of the state’s groundwater basins, California enacted the Sustainable Groundwater Management Act (SGMA). That Act requires designated priority basins to return, over time, to sustainable status, defined as the absence of “undesirable results” such as overdrafts, subsidence, and “depletions of interconnected surface water, that have significant and unreasonable adverse impacts on beneficial uses of the surface water.”

The Act, however, offers little solace for California’s desert basins. With only a handful of exceptions, desert basins have not been listed as priorities under the SGMA and will not be regulated under the Act for the foreseeable future, if ever. Moreover, a central theme of the Act − which continues preexisting California state groundwater policy − reposes control over groundwater extraction in local authorities. Local control has been far from adequate in effectively regulating desert groundwater resources, resulting in proposed projects like the unfortunately named Cadiz Valley Water Conservation, Recovery, and Storage Project, which would mine vast quantities of groundwater from a desert basin for export to coastal communities, while drying out an essential desert spring.

With some notable exceptions, such as the measures asserted to protect the Devils Hole pupfish and other listed species dependent on perennial groundwater, federal agency policy in the past has not been much help in reining in destructive groundwater extraction practices. The federal government has long deferred almost total control of groundwater resources to state authority, asserting federal rights, including reserved water rights, with apparent reluctance. However, many, perhaps most, desert groundwater basins lie under public lands, managed by the Bureau of Land Management (BLM).

BLM’s organic act, the Federal Land Policy and Management Act, requires the agency to protect ecological resources, including those dependent on surface flows of groundwater. Where desert springs exist on public lands, BLM is accordingly required to devise means to protect them, requiring the agency to assert control over groundwater extraction that may affect groundwater dependent ecosystems. Until recently, protecting springs and groundwater dependent life has not been a first rank priority for BLM as it sorts out how to balance desert land uses.

BLM’s recent desert resource management plan amendments, the Western Solar Plan, and Desert Renewable Energy Conservation Plan (DRECP), newly accept enhanced responsibility for management of groundwater resources where projects may cause adverse impacts on desert springs and the species dependent on them. The DRECP’s Conservation Management Actions require applicants for rights of way and other development projects to demonstrate a full understanding of basin hydrology, to put in place predictive modeling and monitoring systems, to establish trigger levels in appropriate cases to avert impacts to groundwater dependent ecosystems, and to provide compensation, for example, where overdraft conditions exist. It is not clear, however, how BLM’s new direction in groundwater policy will fare under the new administration, which has announced that it is considering significant changes in the DRECP.

The lack of comprehensive information about desert springs, seeps, and wetlands has retarded efforts to protect them. Several years ago, BLM in collaboration with several None Governmental Organizations, recognized the need for a full inventory of springs on public lands in the Mojave Desert. The collaboration sponsored hydrogeologist Andy Zdon to collect location, water chemistry, ecosystem features, and other key data on over 300 Mojave springs. Zdon’s initial report will be supplemented this year with another round of sampling of priority springs, providing BLM and the public for the first time with an accurate basis for analyzing threats to these vital water sources.

As in the case of BLM, state agencies have largely neglected to exercise regulatory powers to protect groundwater and groundwater dependent ecosystems. California’s trustee agencies − the Department of Fish and Wildlife and the State Lands Commission − have legal duties to conserve and enhance resources under their management. Fish and Wildlife has a broad responsibility to reasonably protect all plant and animal species in the state, irrespective of whether they are listed as threatened or endangered. Clearly, the protection of groundwater dependent species and the water on which they depend is well within the scope of this agency’s duties.

California’s State Lands Commission holds significant desert acreage as school lands, and is legally committed to maximizing the economic value of those lands. Without ready access to groundwater, most of those lands will be close to worthless. Projects that mine aquifers underlying these lands should be of immediate concern to the Commission. Surface land ownership in California carries with it an overlying right to equitably share in the beneficial use of groundwater, which can and should be asserted by the Commission to limit mining and export of groundwater under state lands.

The public trust doctrine supplies another potential source of state authority to limit unreasonable groundwater withdrawals. The public trust case law, beginning with the Audubon suit over diversions from tributaries of Mono Lake, has recently been expanded to potentially limit groundwater withdrawals affecting the Scott River. While the doctrine has traditionally extended only to the protection of tidelands and navigable bodies of water, there are strong arguments to expand its protections to all state natural resources, including desert springs. The idea behind the public trust, dating to Roman law, is that the sovereign holds title to natural resources, including water, in trust for the public at large, and alienation of those resources without reasonably balancing the needs of natural systems violates the trust.

One can hope that as the demand to extract increasing amounts of desert groundwater rises, federal and state land and resource managers will assert all available authorities to protect the critical and delicate desert streams, springs, seeps and wetlands that depend on groundwater aquifers.

Bill Christian has worked in the Mojave Desert for The Nature Conservancy as a project director for 15 years, focused primarily on the Amargosa watershed. That work led to an interest in groundwater and groundwater dependent ecosystem conservation issues. He trained as a lawyer and has taught environmental law and policy at  Claremont McKenna College for the past decade. He lives in Pasadena with his wife and three dogs.

The views expressed in this article are those of the author and are not necessarily those of The Nature Conservancy.