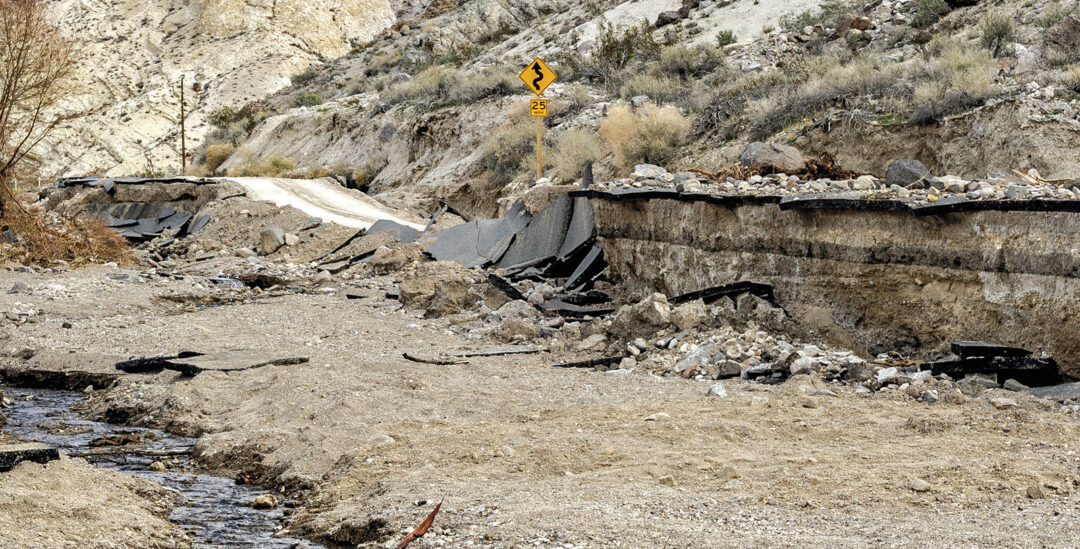 “I’ve never in my life been so scared,” said Isabelle Woodward as she told the tale of Sunday evening, October 18, 2015. On that night a major storm was flooding Grapevine Canyon in the park’s north end. Isabelle, a park guide at Scotty’s Castle, and her husband Mike had arrived in their motor home at the Grapevine residential area just two days before. She was scheduled to start her tenth season at Scotty’s Castle the next day, along with eighteen other park staff. “We knew from the weather forecast that it was going to rain, and as predicted it started to dribble around 6 or 7 p.m. Then we started to see thunder and lightning. Around 8 p.m. hail stones as big as quarters, came down hard and fast for over an hour. The hail stopped around 9 p.m., but by then the power had gone out. We could not see anything, but we knew that water had started flowing in the canyon which could be dangerous. Lots of fast moving water and debris can cut gullies, and if water started flowing underneath our motor home, we knew that it could be destabilized and tip. But there was nowhere for us to go.”

Meanwhile three Park Rangers arrived at the Park’s north end to assist stranded visitors at Mesquite Campground and Ubehebe Crater. Since it was rapidly becoming too dangerous to cross flood waters already flowing violently across the roads, twenty-three people spent a rather uncomfortable night at the Ubehebe Crater parking lot.

When the water started rushing out of Grapevine Canyon, it crossed the Scotty’s Castle Road carrying rail road ties (that had been stored in an area near Scotty’s Castle), and literally tons of debris and mud. One of the Park Rangers was heard to exclaim on the park radio: “That’s a dumpster floating by!” Ainsley Holeso, the park’s Chief of Maintenance, confirmed: Yes, six full dumpsters were carried as much as four miles downstream. Charlie Callagan, Wilderness Coordinator, found that some two hundred old railroad ties floated more than seven miles from their original location.

Mike Reynolds, the park’s Superintendent, explained, “What occurred in Grapevine Canyon was highly unusual. A storm cell came in from the west and then stalled over the canyon for five and a half hours. It didn’t move. We could see the black sky and almost continuous lightning from where we were at Furnace Creek, sixty miles south from Grapevine Canyon. It was the most lightning I’ve ever seen in a storm.” There had been three and a half inches of rain above Scotty’s Castle during the Sunday storm. The best estimate available concluded that a wall of water came down Grapevine Canyon that was four feet deep, in certain places 200 feet wide, and moving along at ten to twelve feet per second.

The magnitude of the storm at Scotty’s Castle was apocalyptic, and there are many different stories about what took place that night and its aftermath. But this storm actually followed two other storm systems that had come before it. The first storm of the series came into the valley on Sunday, October 4, 2015

Frank Lambert, the Roads and Trails Supervisor, was one of three staff who drove south on Badwater Road that day to assess road conditions. He recalled, “It started raining hard sometime during that afternoon. There was this whole string of little cells strung out approximately ninety-five miles from north to south. That storm affected the entire park but especially the east side.” He was startled to see what came next. To illustrate his comments he pulled up pictures taken with his cell phone and with enthusiasm in his voice described the many waterfalls that were coming down the mountain face in the Mormon Point area. “There were waterfalls at least ten feet wide! It was awesome. Debris and mud was already starting to cover the road.” Death Valley’s Maintenance staff swung into action.

Mike Reynolds described what happened next. “Initially we managed the situation ourselves with some assistance and resources from Lake Mead and elsewhere, such as heavy equipment operators and law enforcement personnel. For two whole weeks we cleared roads. On October 16th, we opened Badwater Road. On October 17th, we opened the Dante’s View Road, Emigrant Canyon Road, and Scotty’s Castle Road.” But the rain did not stop. On Thursday, October 15th, the rain gauge at Furnace Creek showed 0.16 inches of rain within the previous twenty-four hours. On Friday, October 16th, it measured 0.25 inches of precipitation. On Saturday, October 17th, there was an accumulation of 0.19 inches. Once again, the roads flooded.

Mike continued: “This series of storms on October 16th and 17th primarily affected the park’s eastern mountain ranges and deposited ten times the amount of debris that we had just finished clearing off the roads from the October 4th storm. The problem was that this area was now very susceptible to further damage since the roads and shoulders were already compromised. This new storm was so much stronger.” Once again, every road in the park was closed.

Unbeknownst to the already overextended and exhausted park staff, this was not to be the whole story just yet. When the rains finally stopped on October 18th, the damage was astonishing. Simply to reach Scotty’s Castle, it took two Park Rangers three miles of walking on what had previously been a paved road. The castle itself had been protected from the mudflow, but every other building had been affected. Inside the Visitor’s Center and the Long House right behind it, was a four foot high deposit of mud and gravel. Walls and windows were blown out. Gretchen Voeks, Scotty’s Castle curator, found herself becoming increasingly anxious about the irreplaceable Scotty’s Castle museum collection. She soon learned, much to her relief, that the castle itself, and hence the collection, was mostly safe. But she also realised that the collection was not yet out of danger as the infrastructure had been completely destroyed and there was no climate control in the building.

On the other hand, Wanda Rashkow, Death Valley’s archeologist, found some of her worst fears confirmed. A number of prehistoric archeological sites had been seriously impacted by the various storms. Some were completely wiped out. Others developed water channels and gullies right through them. But she added a very interesting perspective on the Grapevine Canyon storm. “In one particular side canyon there had been benches (raised ground surfaces), along the canyon walls where prehistoric sites had been located. When we went to look at them, these benches were completely gone. We knew that these had been significant archeological sites. When we arrived, we found that as much as five feet of native-American culture bearing materials had been carried away by water.” Wanda continued: “This is very interesting because the first Anglo-Europeans came into this area around the 1850’s. So we know that these floods have been the first ones of this magnitude in at least 150 years.” Prehistoric native-American sites can be hundreds or even thousands of years old. This may mean that an event of this magnitude has not taken place in a very long time. She added: “We have now been warned. We need to ask ‘How can some of these sites be protected?’ Archeological sites are different from, for example, wildlife or plants. Hopefully the wildlife will continue to exist. Plants will regenerate. An archeological site does not. Once it’s gone, it’s gone.”

The effort needed to repair all the damage to the park was enormous. More than 500,000 tons of mud and debris had to be removed from the roads. Major road repair was needed. Not only was the damage to the buildings at Scotty’s Castle extensive but the entire water, sewer and electrical systems at the castle were destroyed and in need of replacement. There was far more work than could be managed by the park staff itself. On Thursday, October 22nd, the NPS Western Incident Disaster Team was contacted. Four days later, the first Incident Team members entered the park and set up an Incident Command Center.

There have been seven consecutive teams assisting with the recovery process in Death Valley involving nearly three hundred NPS staff from sixty-three different NPS units. Each team spent about two weeks in the park. Some individuals continued for more than one rotation.

Professionals from various fields came in as needed. JD Swed, one of the Incident Team Commanders, mentioned: “We’ve had heavy equipment operators here, mechanics, electricians, and hand crews. The Lake Mead Fire Crew was just here to assist with a controlled burn of debris that had accumulated above Scotty’s Castle. At one point we also had an arborist involved to help us deal with compromised Cottonwood trees that had to come down. Some were more than five feet in diameter. We also had contracting specialists here, many archeologists, cultural research specialists, and historical preservation crews.”

But there is another aspect of the story that has made a big impression on the Death Valley staff: the unforgiving force of water and its absolute power over this arid landscape. While many people spoke of their impressions, two examples follow.

Gretchen Voeks was awestruck. She explained: “In Australia were I grew up, the floods came as a sheet over the landscape. In Australia we have very few mountains. This is different. I was completely unprepared for the dramatic change in the landscape. How did this happen? Where did all this water come from? The power of it. This was shocking to me. I could never have imagined such an event.”

Reminiscing about his experience on October 4th, Frank Lambert exclaimed: “This is Mother Nature at her best. This was a beautiful storm. It was a landscape changing event. These rock slides – they are amazing. We got to see one of these events that made this landscape. Here we can see how it all works. We can see the cycles. There is a new alluvial fan along Badwater Road. In the Mormon Point area, an alluvial fan is now four feet higher. There are huge canyons that weren’t there before. The water flows moved rocks as big as this office – it was four times the flow rate of the Colorado River. In 1980 I saw Mount St. Helens blow. And now I’ve seen this!” Frank was quiet for a moment as an expression of awe fleetingly crossed his face, and then he said: “But all this water didn’t destroy the landscape. It changed it. It only destroyed what we built.”

Birgitta has volunteered in Death Valley National Park since 2008. Currently she and her husband, photographer Neal Nurmi, are working together documenting Death Valley’s backcountry cabins and other structures.