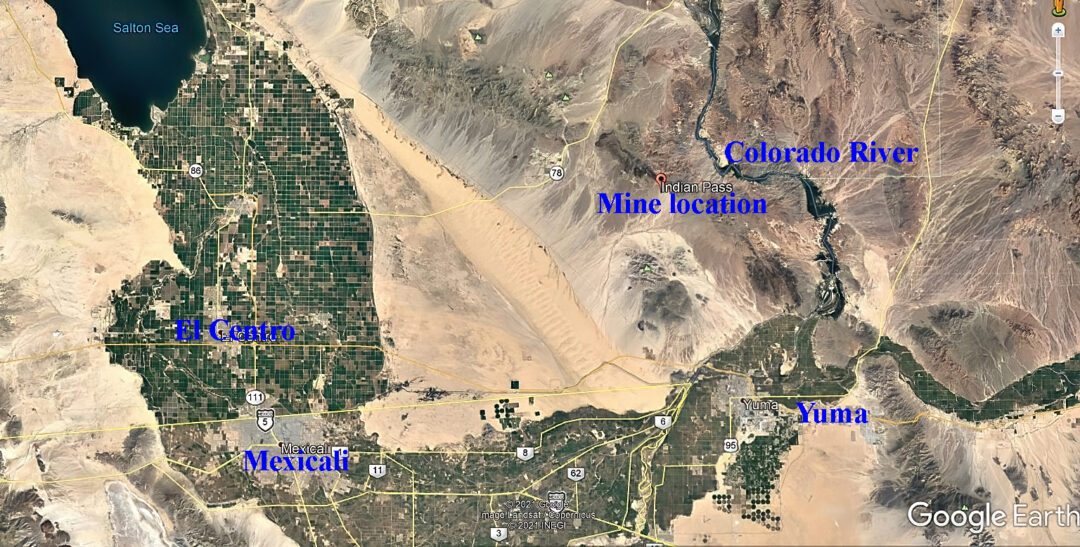 Cyanide Heap Leach Gold Mine at Indian Pass – will this Travesty of Justice never end?

From: Greenaction for Health and Environmental Justice, March 9, 2021

In 1994, Glamis Gold, a Canadian gold producer, attempted to obtain permits to operate a mine on the sacred and culturally significant land at Indian Pass in Imperial County, CA. At the time, the project was opposed by the Quechan Tribe, tribal members, and other members of the public all of whom were concerned about potential environmental impacts, destruction, and desecration of sacred and culturally significant sites. Several years later, in 2001, the request was denied because it was determined that “digging such a mine would irreparably harm the environment of the Quechan ancestral lands”. (Tribe Prepares for Renewed Fight Over Gold Mine, January 7, 2002, New York Times, Nick Madigan)

Since then, KORE Mining has come into possession of the project and the proposal has been reopened. The land upon which KORE wishes to place the mine falls within the California Desert Conservation Area and in 2002, the Kw’st’an Sacred Sites at Indian Pass were named one of the Eleven Most Endangered Historic Places by the National Trust for Historic Preservation (“America’s Most Endangered Historic Places” National Trust for Historic Preservation, 2002). KORE has acknowledged, in their Technical Report, that they are well aware of the cultural and sacred significance of the land they wish to mine upon. “The EIS public review process progressively revealed that the local Quechan Tribe ascribes very high religious and cultural significance to this area” (KORE Mining Technical Report, page 20)

In order to extract the 1.2 million ounces of gold they intend to extract, KORE has stated that, “Imperial is a large, near surface oxide gold deposit with potential for open pit (“OP”) mining and cyanide heap leaching (“HL”)” (KORE Mining).

In 2019, a report by KORE Mining titled, “Technical Report for the Imperial Gold Project” stated that, “Currently there are no active federal, state, or local permits authorizing exploration, development or any other mining activities in Imperial Property.” (KORE Mining Technical Report, page 19) While we still await updates on permits and permit applications, KORE has reported on their website that, “The company published a robust PEA (more information here) and has commenced the permitting process to advance the project. KORE has also started exploring to expand the current resource and a district scale exploration program.” (Imperial Project, KORE Mining) In addition, it was reported to PR News Wire that they expect to receive a permit for a drill program by mid – 2021 (KORE Mining Discovers Gold in Dry Stream Beds Between Imperial and Mesquite Increasing Confidence for New Gold Discoveries, PR News Wire).

On February 11, 2021, Greenaction contacted both the Bureau of Land Management (BLM) office in El Centro and the Imperial County Planning and Development Services office (ICPDS) to request more information. In our messages to the BLM and ICPDS we inquired about the current status of the project in regards to permits and/or permit applications that have been given to KORE Mining. Additionally, we asked if a cultural assessment would be done in order to examine the cultural impact of this proposed project on the land. Finally, we requested to be notified of all opportunities for public comment on the project. On February 12, 2021, Assistant Field Manager of the El Centro BLM office, Carrie Sahagun, informed us of the following, “As for the status of the project, we have reviewed the IUC exploration plan of operations and are coordinating on the next steps; which will include gathering the information needed to conduct the National Environmental Policy Act (NEPA), Endangered Species Act and National Historic Preservation Act processes. Field inventories for both biological and cultural resources will be conducted and we will also be conducting Government to Government consultation on the proposed project.” (2/12/21 email from El Centro BLM) We have been added to the BLM notification list for this project and have requested copies of Imperial USA Corporation’s Plan and plan related documents. As we have yet to receive a response from the ICPDS, we have submitted a formal Request for Public Records.

We encourage everyone concerned (tribal governments, grassroots and advocacy organizations, and individuals) to write to BLM to be notified of opportunities for public comment on the project and to express opposition. To be added to the BLM notification list for this project, contact Mayra Martinez at mymartinez@blm.gov with the following email:

Please notify me of any and all opportunities for public comment on this project. We strongly oppose this project due to concerns about environmental impacts and desecration of sacred and culturally significant sites.