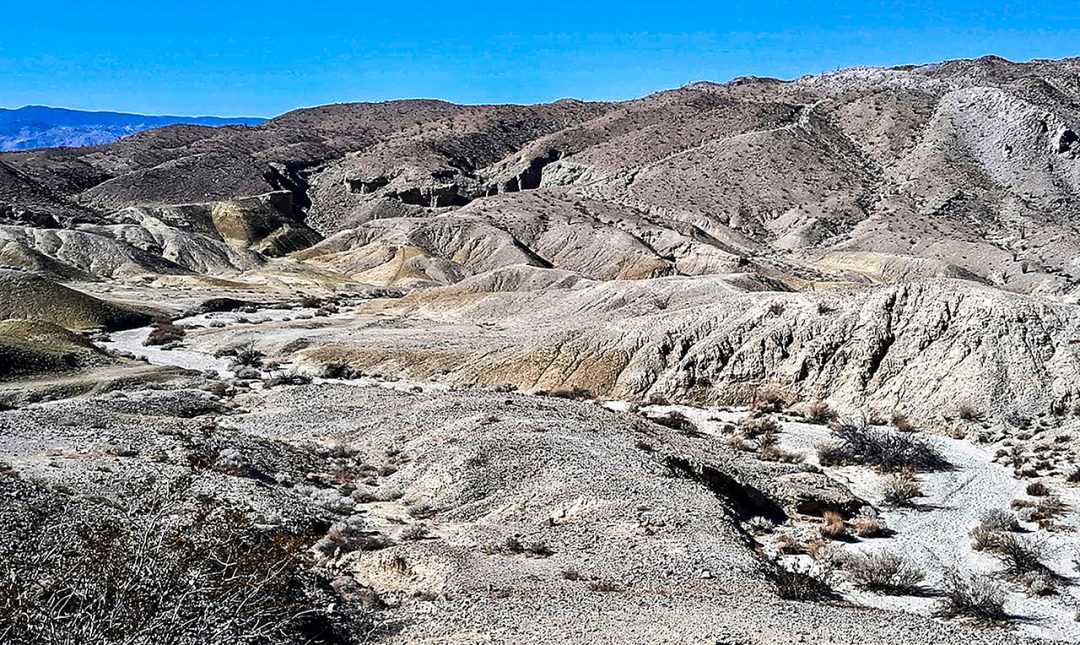 Crisis in the Coyote Mountains

CRISIS IN THE COYOTE MOUNTAINS

Trash and Vehicles in a Wilderness Area

Like many readers of Desert Report, I have been active in desert conservation for a long time. My activities go back to the late 1970s when I gave testimony at a public hearing for the original Bureau of Land Management (BLM) Desert Plan that was finalized just before President Jimmy Carter left office. In the latter part of the 1980s and early 1990s, I participated heavily in the mammoth effort to pass the California Desert Protection Act of 1994. What followed during succeeding years was a continued drive to push the BLM to enforce the Desert Act provisions even as significant desert acreage moved to the National Park Service.

In the old days of desert conservation work, the issue of climate change was either unknown to us or was viewed widely as a very long-term problem with plenty of time to address it as far as desert lands in California were concerned. Oh how we now know better. Climate change as an issue has now taken center stage with several conservation organizations, including the Sierra Club. Some of us desert rats bemoaned what we saw as a move away from the traditional conservation focus on problems like mining, grazing, off-highway vehicles (OHVs), and urban sprawl. Wilderness creation and protection in general seemed to take a back seat all too often.

We all bitterly realize now how climate change is here to stay and will exert increasing pressure on our desert ecosystems. Meanwhile, we are still faced with vintage challenges including how to keep the BLM and other agencies on the ball protecting designated wilderness and other safeguarded classes of desert land.

The Trump border wall disaster occupied a lot of conservationists’ time and mental space for several years, and appropriately so given the dramatic damage inflicted in places like the Jacumba Mountains Wilderness in California’s Imperial County. Still, while our attention was diverted to the border and to climate change, gaps in our protective efforts elsewhere crept in. One prime example of this trend occurs in the Coyote Mountains Wilderness in Imperial County.

Long a favorite hiking area due to it justly famous fossil deposits and unusual geological formations, the Coyote mountains make up an 18,000+ acre BLM wilderness that was created by the Desert Act in 1994. A portion of the wilderness borders on the Anza-Borrego Desert State Park to the north, thus increasing the effective size of the protected area. These rugged volcanic peaks, intermingled with sandstone and mudstone hills as well as exotic wind cave formations, constitute a veritable desert wonderland. In the mid-19th century, renowned geologist William Phipps Blake discovered and first reported these vast fossil beds to western science. From the late 19th century forward, many scientific articles were published about the place, and early tourists flocked to see it. Off Road Vehicle Damage in “Limited Use” Area

It is also significant that the Coyote mountains sit next to an OHV free play area to the east, and that lands to the south are scarred by a gravel mine, two major power line corridors, and a wind farm. Access to well-known Fossil Canyon (aka Shell or Alverson Canyon) is solely via a marked BLM dirt route passing through a supposedly “Limited Use” zone. Target shooting is permitted in the limited use area, shooting trash and shell casings must be removed, and vehicles are limited to marked roads only. Thus in order for non-consumptive users to gain access to remarkably scenic fossil and geologic treasures they must traverse what amounts to a shooting gallery – especially on weekends. Over the years I have been to Fossil Canyon and environs at least ten times, and it is an incomparable resource. Despite heavy collecting pressur, one can still find beautiful and intriguing fossils remains of mostly marine invertebrates dating from four to six million years ago when this wilderness was under a shallow sea.

Shooting targets in a "Limited Use" area Sadly, uncontrolled camping, shooting, and OHV use have badly damaged the landscape even though it is within a signed, limited use area. Moreover, for years the local BLM office in El Centro has failed to fix a vandalized metal barrier at the wilderness boundary allowing frequent illegal OHV incursions into Fossil Canyon. It is reported that BLM is now near to finally replacing the barrier.

Along the southern periphery of the wilderness and along the access route to Fossil Canyon, I have repeatedly witnessed OHVers violating the wilderness boundary and roaring up canyons replete with fossils and irreplaceably lovely rock formations. Nearby, there are abundant signs of out-of-control OHV abuse in the so-called “Limited Use” area. Parts of this landscape resemble the worst excesses of any designated OHV free play area. This is especially galling because there is indeed a free play area for cross-country travel a convenient distance away. BLM seems unable or unwilling to commit the resources necessary to curb the worst behavior of a portion of the user public.

In addition to damage inflicted by careless vehicle use and large amounts of trash, the access road to Fossil Canyon has become a clear and immediate public safety hazard. The boom of gunfire is omnipresent and can be easily heard within Fossil Canyon itself. I have heard the suspicious sound of semiautomatic weapons discharge more than once and seen large caliber shell casings in profusion. I recently encountered a hiker in Fossil Canyon who reported that he had previously heard bullets reaching into the canyon itself and had avoided it for several years as a result. Trash in the "Limited Use" area

The public safety hazard extends into a zone on the western periphery of the wilderness along a dirt access route leading to the popular Domelands/Wind Caves. This is an especially prized place due to its fabulous long distance views, fantastic wind cave formations, and superb fossils. Once again, BLM allows shooting in this region right next to the popular access route and the staging area for hikers and backpackers. I myself have heard the crackle of bullets entering the wilderness proper from shooters. These are blatantly incompatible uses.

What to do?? In light of my observations and experiences there, I offer the following modest proposals. The El Centro BLM Field Office should immediately initiate a public process to amend relevant land use plans in certain respects.

There must be several defined and well-marked zones across the Limited Use Area that allows safe access to the boundary of the Wilderness. In these designated regions, all shooting should be prohibited and only street legal vehicles allowed to enter. Appropriate signage and increased law enforcement will be required in order to make the necessary changes stick. New signage should also be provided that guides interested members of the public to Fossil Canyon, which can be quite hard to locate in the maze of signed routes. The BLM should also arrange clean-up of trash in the affected area using whatever volunteer labor is available so as to discourage both further deterioration of the landscape and illegal shooting.

While we focus on the detrimental effects of climate change and poorly sited renewable energy projects in the California desert, let us not ignore or forget other pressing needs. The Coyote Mountains Wilderness would be a fine place to start.

Nick Ervin is a retired counselor and desert rat who has lived in San Diego and explored the local arid lands for over 40 years. From 1995 through 2000 he served on the U. S. Bureau of Land Management’s California Desert District Advisory Council.