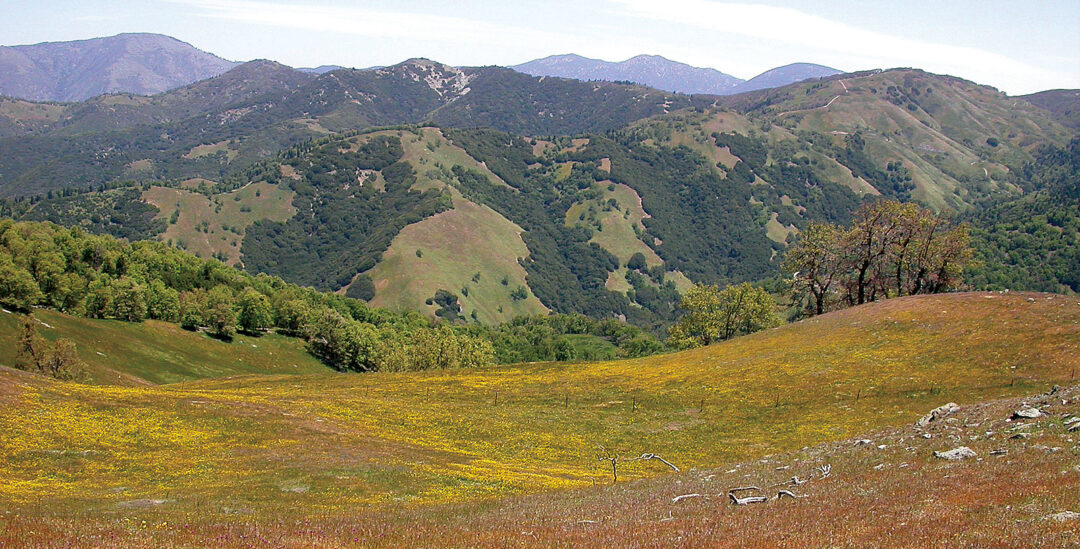 By Ileene Anderson and J.P. Rose   |  In the wild heart of California, at a crossroads where valleys, mountains, and deserts meet, lies Tejon Ranch, California’s quintessential natural landscape. Home to the California condor, Tejon encompasses more than 270,750 acres of private land between Los Angeles and Bakersfield – and it continues to be threatened with urbanization.

A “ranch-wide agreement” was made with several environmental groups in 2008 to preserve part of the ranch in exchange for non-opposition from the groups, including the Sierra Club. The Center for Biological Diversity participated in the negotiations, but ultimately declined to participate in the agreement because of inadequate guarantees for the conservation of Tejon Ranch over the long-term. Instead, the Center, where we work, has challenged the environmental reviews and permits of the three city-sized developments proposed by the hedge fund-backed Tejon Ranch Corporation.

Photo above: Looking east towards Middle Ridge from Winter’s ridge

Tejon Mountain Village, for example, would be a luxury resort development that would replace more than 5,000 acres of intact wildlife habitat with houses, commercial space, golf courses, hotels, resorts, helipads, and all the other infrastructure associated with building a new suburb in Kern County.

This sprawling project was unsuccessfully challenged in state court in 2009 and appeals court in 2011. To build this new resort city in the wild heart of California – impacting California condors and sixty-one other rare animals and plants – the Corporation prepared a Habitat Conservation Plan, which was fully permitted by the U.S. Fish and Wildlife Service in 2013.

In April of 2019, the Center and Native American groups challenged that plan in court. The lawsuit focuses on the development’s unprecedented impacts to California condors. These critically endangered birds, brought back from the precipice of extinction through a decades-long effort, could now have one of their most important habitats developed into luxury houses.

Grapevine, another Tejon development, would be a sprawling new city on over 8,000 acres of wildflower fields and grassland that is a crucial wildlife corridor for the critically endangered San Joaquin kit fox and other imperiled animals and plants. Grapevine was proposed for 14,000+ housing units and 5.1 million square feet of commercial space at the very southern end of the San Joaquin Valley in Kern County. This area already has the worst air quality in the nation.

The Center and allies successfully challenged this project in court. Kern County has recently filed a new Notice of Preparation for a Draft Supplemental Recirculated EIR for Grapevine Specific and Community Plan that closed May 13, 2019. The new EIR should be available for public comment this coming summer.

Finally, on April 30, 2019, the Los Angeles County Board of Supervisors permitted Centennial, the third sprawling new city on Tejon Ranch. Centennial would build more than 19,000 housing units and 8.4 million square feet of commercial space over 5,800 acres of the last, best native grassland and wildflower fields left in California. The Center is considering all options to stop the development of this new city far away from even the nearest suburban center of Santa Clarita.

All three projects would add more traffic to our already clogged freeways, ramp up planet-warming emissions that hurt California’s ability to reach its greenhouse gas-reduction goals, and increase air pollution in existing communities adjacent to the commute routes. They would do nothing to solve our state’s housing crisis because they’re remote projects that target a “white flight” housing demographic. But they will pave over the wild heart of California.

Tejon Ranch is not open to the public, so it is unclear if the conservation lands are being managed properly, particularly given the reduced conservancy staffing. Despite the ranch receiving more than $15.8 million from California’s Wildlife Conservation Board for conservation easements over 62,000 acres, Californians and the public are unable to access these areas that their tax dollars were spent to conserve.

Tejon Ranch is much more valuable to humans as publicly accessible open space – a respite from our evermore hectic and technological lifestyles. People generally prefer to live close to where they work, rather than spending hours a day on traffic-clogged freeways breathing tailpipe emissions.

Through the lens of climate change, where the southern Sierras meet the coastal ranges, the southern end of the San Joaquin Valley, and the western end of the Mojave Desert, the Tejon Ranch is a key connectivity corridor for plants and animals as they try to adapt to our warmer and drier world. New cities would fragment the landscape and eliminate these vital corridors for keystone species like mountain lions.

Our warming and drying world will exacerbate wildland fires, and each of these new cities would be developed in remote areas surrounded by wildlands vulnerable to fires. Because most wildland fires originate from human activities, the incidence of fires on Tejon Ranch will increase as these projects are built, putting people and wildlife in harm’s way.

Because California taxpayers have already spent $15.8 million to preserve 62,000 acres on Tejon Ranch, the Center believes it is time for state lawmakers and officials to step up and secure the whole of the Ranch – or at least a majority of the remaining 200,000 acres, much of which is too steep, unstable, and treacherous to be built on anyway.

For decades we have supported creating a new state park on Tejon Ranch for public enjoyment and as a climate change-adaptation strategy for California. Economically, tourism opportunities of large-scale parks are a boon to local rural economies. That would benefit existing communities and diversify local economies while minimizing negative impacts from housing developments.

We are urging California legislators to envision such a grand new state park instead of housing developments that are neither economically or environmentally beneficial.

Ileene Anderson is a senior scientist with the Center for Biological Diversity. She is also the Public Lands Desert Director for the organization and has worked on conservation issues in the California deserts for over 25 years.

J.P. Rose is a staff attorney with the Center for Biological Diversity. He works in the Center’s Urban Wildlands Program to safeguard habitat for endangered species by limiting sprawl development.