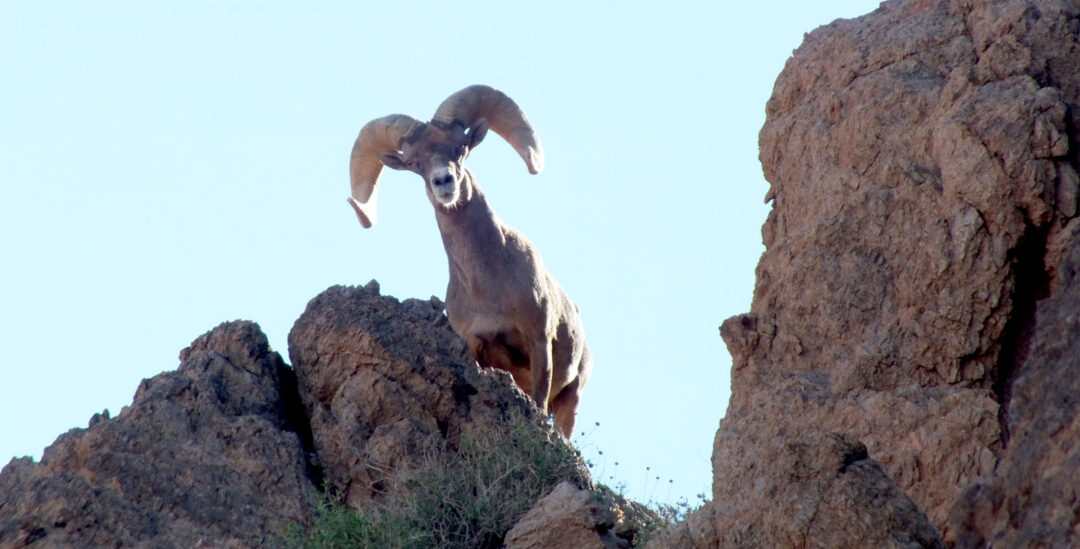 by Clinton W. Epps  |  For many people, the interstate highway system offers a way to see the Mojave Desert. The big four-lane highways connect coastal cities with the hubs of Las Vegas, Phoenix, and other places across the United States. One can gaze at the wide expanses dotted with creosote bushes, stare at craggy peaks only occasionally marked by cell phone or transmission line towers, and wonder what it was like to experience this landscape from a Model T or on the back of a horse. Few people may realize that other species may stare back from that landscape, contemplating the apparently ceaseless flow of traffic, the roar of the big semis, and the chain of headlights from dusk to dawn. In some cases, those species may attempt journeys of their own. To them, the big interstates may represent a minor inconvenience, a challenging obstacle, or a terrifying barrier.

Photo above by Clinton Epps.

Desert bighorn sheep exemplify a species for which movement is critical to persistence in those stark Mojave landscapes. Desert bighorn can thrive in places too arid to support deer or most other large mammals. Their preferred habitats are the steep, rocky mountain ranges scattered across the desert like islands. These ranges have cooler temperatures and trap more rainfall than the desert floor, supporting an abundance of plant life including many species on which desert bighorn feed. In some ranges, springs bring water to the surface that is used by bighorn and many other species, and mountains provide some security from predators such as mountain lions, coyotes, or bobcats. Bighorn detect predators visually, and evade them by climbing steep slopes and rocks. Most probably spend their lives in the mountain range in which they were born, relying on a few natural or human-made water sources and waiting for the unpredictable desert rains to spark the growth of better forage needed to raise their lambs.

Most mountain ranges in the Mojave hold relatively small populations of desert bighorn sheep, perhaps a few dozen individuals to a few hundred. This can be a problem: if totally isolated, each population may be too small to persist. Indeed, during the 20th century, many local extinctions occurred. Disruption of water sources by miners, poaching, drought, and probably disease played a role. But, encouraged by expanded access to surface water through human-made water sources for wildlife, periods of better rainfall, and habitat protection, recolonizations have also occurred. Bighorn sheep of both sexes occasionally make the hazardous journey between mountain ranges, moving rapidly across desert flats. Perhaps they seek better forage, safer places to rear a lamb, or new mating opportunities. Presumably, bighorn sheep that find their way back into an empty mountain range have their choice of resources. This ability for species to recolonize after a local extinction is a key feature of “metapopulations,” or systems of interconnected populations of organisms living in distinct habitat patches. Metapopulations can be much more resilient than any individual population, as long as extinctions do not occur simultaneously across many patches, and as long as individuals can move among patches to recolonize or bolster small populations.

Thus, for bighorn sheep or any other species that lives in small, localized populations, a key requirement for maintaining genetic diversity is connectivity – the ability to move between populations. The natural inclination for some individual bighorn, male and female, to move temporarily or permanently to different areas provides gene flow – animals that persist, and mate, bring their genetic variants along to their new home. If frequent enough, this can offset the loss of diversity to genetic drift even for very small populations. Perhaps more important is that these new individuals help prevent local extinction or recolonize empty habitat. Both processes require that bighorn sheep be able to move freely between “desert islands.”

For many decades, people have known of bighorn sheep moving between mountain ranges in the Mojave. Miners and railroad hands have occasionally reported seeing bighorn or their tracks in low-lying areas far from any usual habitat. Reportedly, when the interstate highways were constructed in the 1960s, concern was expressed that they could disrupt bighorn movements. In the late 20th century, biologists for California Department of Fish and Game (as the Department of Fish and Wildlife was named at the time) realized that bighorn sheep should be managed as metapopulations—systems of interconnected populations rather than a series of individual populations—and concluded that the interstates were likely to function as barriers.

After about the year 2000, researchers gained new analytical tools to examine bighorn habitat connectivity. These approaches highlighted the problems posed by fenced interstates, canals, and other barriers. One such tool was non-invasive population genetics. By collecting fecal pellets from bighorn sheep at waterholes across the Mojave, extracting DNA from those pellets, and comparing genetic variants across the landscape, researchers found striking evidence that populations separated by barriers such as interstates were diverging genetically, and that isolated populations had lower genetic diversity. This allowed the identification of areas where movement between populations should be protected—for instance, by avoiding construction of new potential barriers such as renewable energy developments in critical locations—or perhaps one day restored. Indeed, wildlife overpasses for bighorn that restored connectivity have been constructed in Arizona during highway expansions.

Balanced against the need to preserve and restore connectivity, however, is the risk of disease. The same movements between mountain ranges that can restore populations or provide gene flow can also result in the movement of harmful bacteria, viruses, or parasites. Bighorn sheep are highly susceptible to respiratory disease from contact with domestic sheep or goats. Once contact occurs, bighorn sheep can spread it quickly to other bighorn. Outcomes vary due to the many factors influencing respiratory disease, but it can result in death of adults or ongoing loss of most lambs as they are born without immunity.

Such an outbreak of respiratory disease in Mojave National Preserve in 2013 precipitated a new round of intensive research. When the same strain of a key pathogen known as Mycoplasma ovipneumoniae appeared on both sides of Interstate 40, it was clear that bighorn sheep had crossed the interstate in at least one location. Indeed, both subsequent genetic work and intensive tracking of movement using new satellite location collars demonstrated that sometime between 2002 and 2013, at least a few bighorn sheep learned to use a particular wash bridged by Interstate 40 as a movement corridor, resulting in gene flow, but also apparently carrying disease. The origins of this particular outbreak are unknown, and the transmission across the interstate may have played only a minor role, but this discovery points to a central and challenging question: is it better to preserve and restore connectivity, or retain some barriers to limit spread of exotic diseases?

As we continue to study and debate this question, it is important to note that even minimal contact among bighorn can transmit disease—and almost no barrier can prevent all contact. But, population and metapopulation health relies on strong connectivity. The satellite location collars have demonstrated that most bighorn sheep do not cross interstate highways even when coming in close contact with them. Therefore, it is likely that protecting and restoring connectivity should remain a core goal, with exceptions considered on a case-by-case basis.

Bighorn sheep live on public, military, and private lands. Thus, managing bighorn sheep metapopulations, understanding movement, gene flow, and disease, or even restoring connectivity requires cooperation across borders, agencies, and organizations. Management and study of desert bighorn sheep in California has benefited greatly from efforts by and support from many sources, including the California Department of Fish and Wildlife, National Park Service, Department of Defense, California Chapter of the Wild Sheep Foundation, US Geological Survey, Bureau of Land Management, Society for the Conservation of Desert Bighorn Sheep, California Department of Transportation, US Fish and Wildlife Service, National Park Foundation, researchers from universities, and volunteers.

The highways will only get busier. New roads, high-speed railways, and other development projects in the desert are proposed. Unless existing or new barriers are modified to allow movements, bighorn sheep and other species will continue to be stopped by these barriers, and will continue to stare across to the mountains just beyond the asphalt ribbon. Connectivity for wildlife matters—and can be restored—if the will to do so exists.

Clint Epps is an associate professor in the Department of Fisheries and Wildlife at Oregon State University. He has studied desert bighorn sheep in the Mojave
Desert of California since 1999.