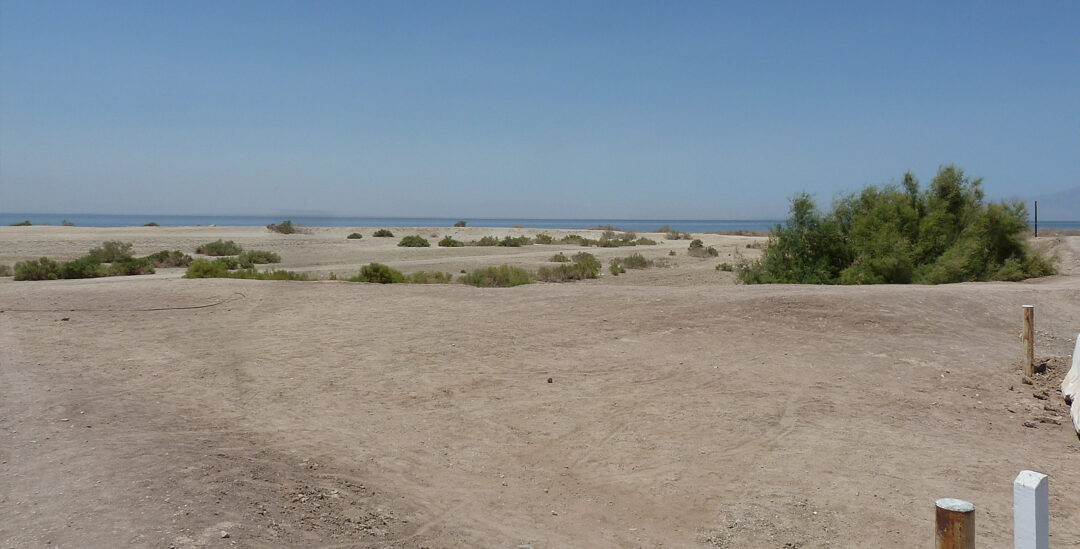 Can Importing Water From The Gulf Of California Save The Salton Sea?

A lot of people are saying you need to import water from Mexico to save the Salton Sea, but there are several challenges. It would require permission of the Republic of Mexico, which is currently not very fond of our President. Even at the best of times, when there is clear mutual interest such as delivering water to the Colorado Delta, it’s taken five full years to reach agreement between the nations.

There are ecological challenges. Theoretically you could put a pipeline or channel below the biosphere core area and avoid harming a pretty productive estuary. There’s also the Vaquita porpoise, the most endangered marine mammal in the world. You wouldn’t want to bring them into whatever pipeline or canal you’re developing.

Photo above: Bombay Beach on the east shore of the Salton Sea – with the water already far off in the distance. Photo by Craig Deutsche.

The second challenge is cost: the California Department of Water Resources estimated the cost at $30-40 billion dollars. That’s because one of the key challenges with any kind of import plan is that, along with that water you’re importing a lot of salt – and you need to get rid of it.

If you simply propose to bring in water and not export salt, what you do is address the dust control problem, but not the habitat challenge. It’s fairly easy to bring in a lot of water without having to worry about pumping that water
back out. So if your intent is simply to have a brine lake where Salton Sea is, you can do that.

So there are the issues of cost, salt balance, and the Mexican negotiation – all of which by my estimate would take 20 to 30 years before you get the solution you’re looking for. The Salton Sea will be completely different than it is now.

Does the idea of importing water to the Salton Sea distract from what can be done now?

Right, so that’s the major problem. Even if you could snap your fingers and all of a sudden there was a restored Salton Sea and you could bring in all this water, in we’d have a real conversation about whether it is worth all this additional money to have a whole Salton Sea? But when people continue to point to this solution, it distracts from what we really need to be doing right now, which is investing money in public health and protecting the environment and rebuilding habitat at least along the shoreline. And then hopefully get some kind of deeper North Lake where you can get a real fishery habitat.

Those things seem to be achievable in what should be the relatively short term, versus under the very best circumstances seeing some resolution with the import plan.

The other potential challenge is people say “oh we’re going to desalinate the water with all this geothermal resource at the Salton Sea and put some of that water back into the Sea.” But Geothermal is not cheap, and building desalinization plants is capital intensive. But the bigger problem is that once you get higher quality there, someone will buy it.

The snow pack in California is terrible, and the current forecast for the Colorado River Basin is one of the worst in the past 20 years. So there’s just not a lot of good quality water in California or the Colorado Basin. So If you produce good quality water, someone’s going to want it – which means that it’s not going to go into the Salton Sea anyway. So if you desalinate water, what you’re really saying is you’re going to sell that water to somebody else and the Salton Sea is going to be a brine sink.

Do you have any other thoughts?

There is so much opportunity out there. I wish they [the state] could get their act together.

With the rapid rise of salinity in the Salton Sea in the next couple of years we’ll lose what is left of the fishery and its value for migratory birds. At that point, concerns regarding the Salton Sea fishery will be moot.

Meanwhile, the state plans to construct about 20 square miles of shallow shorebird habitat around the deltas and to treat a like amount for dust suppression over the next ten years. This is fine and good. But the state’s projects will only cover about
a third of the exposed lakebed. The hyper-saline brine center of the lakebed will become surrounded by 100 square miles of untreated exposed playa, and this means potentially devastating dust storms. The real concern then becomes how to avert a health disaster?

One alternative is to bring ocean water from the Gulf of California via the Laguna Salada, a large dry lakebed southwest of Mexicali Valley. This has been evaluated before, but in the present political climate a bi-national project is “dead in the water.” This raises an interesting question: what about an all-Mexico side of the border project? No one has evaluated a Laguna Salada marine habitat project unto itself.

So, what would it take to simply bring water up from the Colorado River Delta and fill the Laguna? One would still need to provide a discharge back to the Gulf for water exchange, but it would be far easier and cheaper than having to pump water up and out of the Salton Basin and clean it up for return to the Gulf.

The drainage divide that separates the Laguna Salada from the Gulf of California is only about 12 feet high, with an existing canal, the Coyote Canal draining flood flows from the Rio Hardy into the Laguna Salada. Once across the divide, it is all gravity flow into the Laguna. I’d like to convene a team of engineers, hydrologists, and ecologists to look at the precise technical requirements for a stand alone Laguna Salada project as a first step.

If we bring ocean water into the Laguna Salada then imagine this: we would have a 270 square mile inland sea – the largest marine habitat creation project on Earth, providing critical habitat for migratory birds – just as the Salton Sea ecosystem is collapsing. We’re calling it “Birds Beyond Borders.” These are international birds, ranging from Alaska to Central America and beyond.

What’s in it for Mexico?

In recent meetings with the Cucapah indigenous community who owns the majority of the Laguna Salada playa and Coyote Canal, they have agreed to work with us in a series of planning workshops to explore a range of community development projects that could take place around and on a restored Laguna Salada. These could include ocean water agriculture for salt-tolerant crops, aquaculture for shrimp and fish, and ecotourism development for birders and nature lovers.

We’ve also met with representatives of the Baja Norte government and they are very enthusiastic about the project. It would mean thousands of jobs and would turn what today is a worthless playa into an economic development area. We are thinking that this project could be approved and under construction within two years including Mexico’s environmental process.

What does this do for the Salton Sea?

As the Salton Sea begins to experience catastrophic dust storms, and with a change of politics, the option to import water to the Salton Sea now becomes feasible. To connect Laguna Salada to the New River channel would only require five miles of new water conveyance across a 180-foot rise and then it’s all downhill to the Salton Sea.

Imported water could cover the hundred square miles of otherwise exposed lakebed in the Salton Sea to keep it from blowing dust, as well as provide supplemental water for state and county wetlands projects as needed. These constructed wetlands would still be viable and provide some ecological support values for wildlife around the edges of the Sea.

The Pacific Institute estimated that inaction at the Salton Sea will cost up 70 billion dollars in losses of property values, agriculture revenues, ecological services and human health costs. What have we got to lose by not evaluating the Laguna Salada “Birds Beyond Borders” project? A lot.

Michael Cohen is a Senior Research Associate with the Pacific Institute. Since 1998, Mike’s work has focused on water use in the Colorado River basin and delta region and the management and revitalization of the Salton Sea ecosystem. Mike was the lead author of the Institute’s acclaimed report “Haven or Hazard; The Ecology and Future of the Salton Sea.” Currently, Mike sits on the Long Range Planning and the 10- Year Plan Salton Sea advisory committees for the state of California.

Timothy Krantz served as the Salton Sea Database Program Director under the Salton Sea Science Subcommittee established by Interior Secretary Bruce Babbitt in 1997, supporting research into hydrology, bathymetry, sediment chemistry, water quality, and the fish, wildlife and ecology of the Salton Sea over twenty years. Senior Editor of the Salton Sea Atlas, Dr. Krantz has also published numerous articles and encyclopedia entries for the Salton Sea. Currently, Dr. Krantz is working with The Wildlands Conservancy, Seawater Works, the Cucapah indigenous community, and the Baja state government to further the creation of a large sustainable inland marine ecosystem in the Laguna Salada, Mexico.