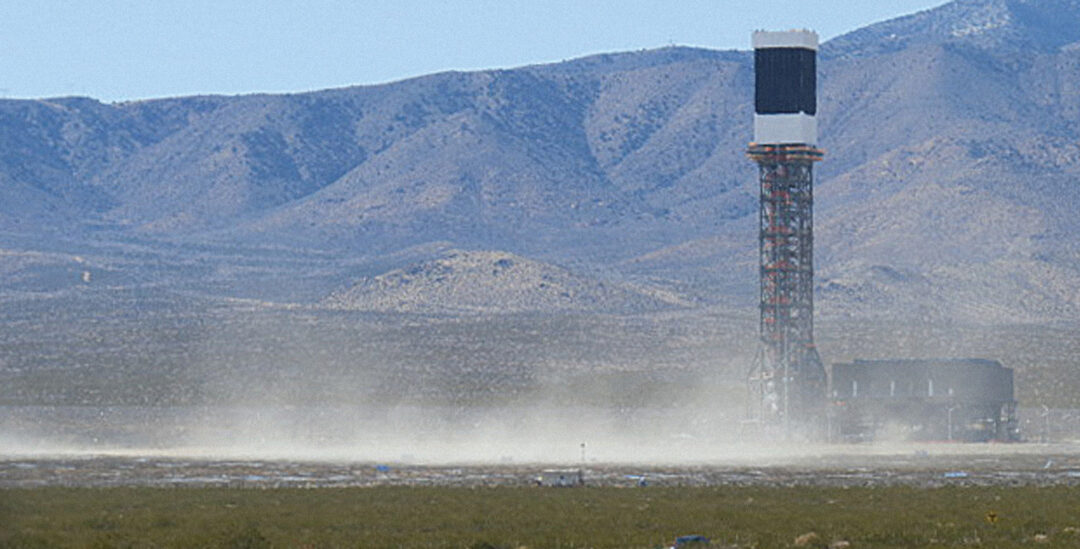 Blowing In The Wind

It began with a mild cough that would not go away. After three weeks it was apparent that something was seriously wrong. When the cough became so racking that sleep was impossible, medical intervention was sought. The doctor listened to my lung sounds (CD), checked the oxygen saturation level in my blood, and then prescribed an antibiotic, assuming that a bacterial pneumonia was responsible. After two miserable days with no improvement, a trip to the emergency room was in order. There were blood tests, chest X-rays, a CAT scan, and a needle biopsy of the lungs. This was followed by a long, long hospital stay with intravenous fluids, a variety of oral medications, and supplemental oxygen. Six months were needed before it was possible to resume previous physical activities. This was a personal experience (CD), and it is a classic case of Valley Fever. There are a number of lessons to be learned.

Photo above: Dust blowing at the Ivanpah Solar Energy Facility. Photo by Basin and Range Watch

What is Valley Fever?

The formal name for Valley Fever is daunting, Coccidioidomycosis. It is a fungal infection carried by airborne dust that is inhaled, and most commonly affects the lungs. This would be entirely academic except that it is reasonably common in deserts and dry agricultural areas. That it is little known and often unrecognized by physicians makes its incidence more significant. And lastly, employers and county officials are sometimes reluctant to acknowledge the possibility of occurrences in their domain for fear of hampering economic development. It is important for individuals to be aware of the facts.

In the environment Coccioides spp. exists as a mold. Microscopic particles fragment and are easily aerosolized when disturbed. In practice this means that in wet years the mold grows well, and, if dry years follow, the spores join the dust in the air when ground is disturbed. These can be inhaled, and in the lungs they undergo a transformation to become a self-propagating infection. The infection most commonly remains in the lungs, but can sometimes invade other tissues with far greater consequences. (1) The diagnosis can be made from a history of probable exposure, from the coughing and shortness of breath that is common, from a chest X-ray, from a biopsy, and from one of several blood analyses. Symptoms of coccidioidomycosis include:

Symptoms of advanced coccidioidomycosis include:

Symptoms may appear between 1 and 3 weeks after exposure to the fungus.

During World War II four army airfields in the Central Valley of California tested recruits for blood indicators of coccidioidomycosis upon their arrival, and again upon their departure. (3) It is notable that sixty percent of the soldiers who became infected had no visible symptoms. The disease is common but most frequently of little consequence. Of the persons who were symptomatic, the severity was highly variable, with only a small percentage (perhaps five percent) having the infection disseminate to bone tissue or to the brain. (1) Symptomatic cases are most commonly treated with an anti-fungal called Fluconozole, which is administered over a long period of time and may continue months or even years after an apparent recovery. The more serious cases are treated with the compound Amphotericin-B, which is administered intravenously daily and over a period of hours. Intolerance to this drug and its unpleasant side effects are sufficiently common and severe that it is often called Ampho-terrible in medical circles. Although deaths are rare, it is usual that complete recovery from a severe infection in the lungs will take months to more than a year, and may require lifetime use of anti-fungal medications. It is not clear whether an infection will confer immunity in the future.

Clearly, people who live (or even travel) in areas where the fungus is endemic and work outdoors when soil is disturbed will have some exposure. In California the endemic areas are the southern part of the Great Central Valley, the Carrizo Plain, large parts of Imperial and San Diego Counties, and much of the Mojave Desert. (3) When George Patton was training troops in the Mojave Desert in World War II, Valley Fever was an active concern. (4) Obviously the risk increases in windy weather and when dust is being raised by agricultural work or construction. There is no vaccination available, so prevention consists of limiting exposure (and acting quickly and decisively if symptoms are detected).

Interestingly, a gorilla at the Los Angeles Zoo was infected several years ago. (5) He was neither an agricultural nor a construction worker, and one may assume he had not traveled outside of Los Angeles recently. It may have been significant that a nearby part of the zoo was being remodeled at the time. Two years of treatment were required, and anesthesia was required to administer the I.V. drugs. It is amusing to imagine the scene if the gorilla had regained consciousness prematurely.

Valley Fever is not well known, and even among many medical professionals it may not be at the head of the possibilities they investigate. The practical consequence of this is that if someone suspects that they have been infected, it is important to ask to have the possibility tested.

The groups most at risk are African American people of Philippine origin, persons with compromised immune systems, pregnant women, and persons with diabetes. The incidence of Valley Fever is highly regional, which probably explains the relative paucity of research done on Valley Fever. It is estimated that 150,000 cases occur in the United States annually. In 2009 there were 13,000 diagnosed cases of Valley Fever, while the comparable numbers for West Nile Virus were 720. (6) It is probable that because West Nile Virus is more widespread, both geographically and socially, it is funded at a rate nearly twenty times greater than Valley Fever. It is also significant that in the past year, federal courts have ordered the California prison system to relocate large numbers of susceptible inmates (African Americans and Philippinos) from Central Valley facilities to other locations where exposure is less likely. (7) Issues of environmental justice are obvious.

Two large solar energy facilities have been completed at the north end of the Carrizo Plain within the past year. These were photovoltaic projects and necessarily required scraping the ground to remove brush before panels were installed. Forty-four cases of symptomatic Valley Fever were reported among the construction workers. (8) Reports on disease incidence were filed by two of the principal contractors (but not all), so it is likely that the incidence was greater than the number quoted here. Many of the workers were from distant parts of California or even from other states where Valley Fever is unknown. It should be the responsibility of the employer in these situations to provide information, to require dust masks when appropriate, and to even discontinue work when conditions are extreme. Requirements and recommendations from Cal OSHA are specific. (9) Public health should be just that: public. The workers should not be solely responsible for understanding their risk.

The case described initially in this article resolved well. Although obliged to continue the use of anti-fungal medications, the author (CD) is well, healthy, and is again volunteering in the Carrizo Plain National Monument. In the driest and most windy weather he stays home, and always he is careful to monitor his head colds and aches to be certain that they are only that.

Edie Harmon is a long-time activist in Imperial County and has been particularly concerned about diseases associated with environmental exposure (lyme disease, valley fever, rocky mountain spotted fever, and others).

Craig Deutsche has been active with the Sierra Club for many years, has volunteered extensively in the Carrizo Plain National Monument, and is current editor of the Desert Report.

(1) A long article in the Atlantic Monthly discussing many aspects of the disease.

(2) CDC on symptoms of Valley Fever.

(4) Detailed report on military studies of disease during WWII.

(7) Transfer of prison population in California.

(8) On incidence of disease among construction workers at solar energy facility.