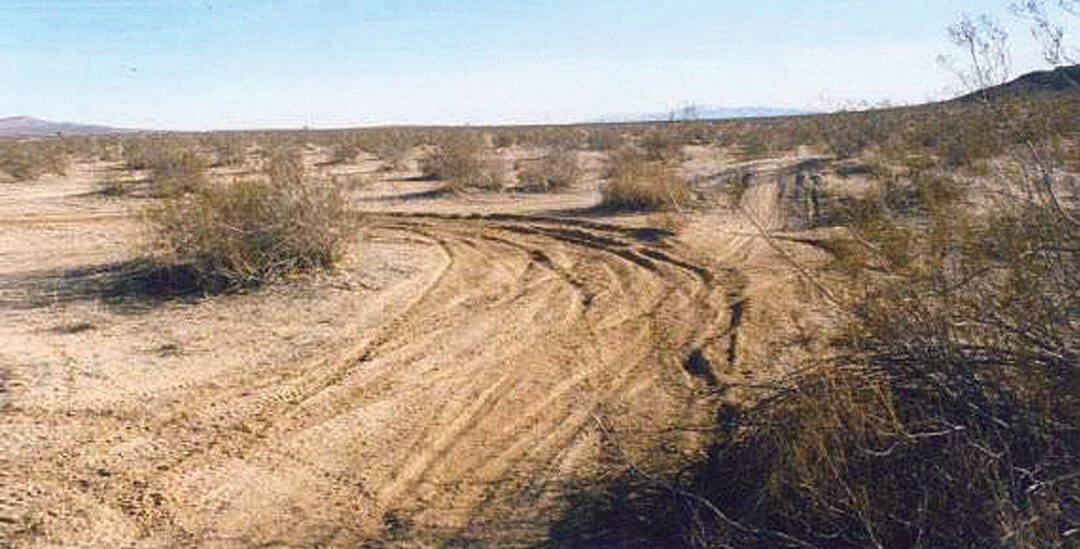 by Ileene Anderson and Phil Klasky

In a move that has angered private property owners, conservationists, desert residents and visitors to the Western Mojave Desert, the Bureau of Land Management (BLM) is proposing to double the miles of off road vehicle (ORV) routes from 5,338 miles proposed in 2006 to 10,428 miles in the preferred alternative. Revision of the West Mojave Plan (WEMO), including its route designations, was required by a 2009 court order which found the Bureau of Land Management (BLM) failed to minimize impacts from off-road vehicle (ORV) routes to cultural and natural resources or to minimize conflicts with private property owners. The new proposal by the BLM ignores years of citizen effort to address ORV destruction of fragile desert landscapes and widespread trespass on private property.

The desert has suffered from years of ORV trespass on private and public lands causing damage to wildlife habitat, conservation areas including Desert Wildlife Management Areas (DWMAa), Areas of Critical Environmental Concern (ACECs), designated wilderness areas, public lands off-limits to motorized vehicles, Native American cultural resources and archeological sites, and private property. By its own admission, the BLM has been unable to protect the public lands under its management from illegal ORV activities.

In 1980, the BLM adopted the Desert Plan which laid out the management for the California Desert Conservation Area (CDCA0. This Plan states “vehicle use will be restricted to existing routes of travel” and defines existing routes as “a route established before approval of the Desert Plan in 1980, with a minimum width of two feet, showing significant surface evidence of prior vehicle use or, for washes, history of prior use.” However, those existing routes were never documented and new illegal routes continued to be created.

With extensive route proliferation, the BLM initiated a route inventory in 1985. None of these routes were analyzed under the National Environmental Policy Act (NEPA) for environmental conflicts nor were they adopted as part of the Desert Plan.

In 2000, the Ord Mountain Route Designation Project was implemented as a pilot project, to be refined and used throughout the CDCA, yet the project was never finalized. BLM did initially make efforts to replicate the detailed data collection on resources in both the Barstow and Ridgecrest field areas, but the resulting BLM recommendations for route designation met with strong resistance from ORV groups, leading BLM to scrap that science-based effort. Instead, BLM ultimately relied on ORV groups to inventory the routes in the “redesign” effort in 2001.

The results were published in a NEPA Environmental Assessment in 2003, and subsequently adopted into the larger West Mojave Plan in 2004. The West Mojave Plan designated 5,338 miles of ORV routes. Following the final decision in 2006, the West Mojave Plan was challenged in court by the Alliance for Responsible Recreation, a coalition of resident and conservation groups. Separate litigation was filed by the Center for Biological Diversity, Sierra Club, Public Employees for Environmental Responsibility, and Desert Survivors which included not only challenges to the route designations but included concerns about impacts on species, grazing and air quality issues.

In 2009, the court sent the BLM back to the drawing board requiring them to apply the minimization criteria laid out BLM’s Code of Federal Regulations 43 CFR Section 8342.1 In the interim, the damage to the desert has continued.

In 2015, after a number of delays, the BLM finally issued a draft supplemental environmental impact statement (DSEIS) with four alternative route proposals. The BLM’s preferred alternative recommends doubling the mileage of existing routes despite a court-ordered mandate to minimize negative ORV impacts in the Mojave Desert.

Illegal route proliferation and damage to resources and private property continues with impunity. Most recently, a December 2014 field report from the lead Barstow BLM ranger indicated widespread ORV abuse that the agency was unable to address, and that there were “incursions into several wilderness areas, sensitive sites and cultural resources,” and that numerous areas experienced “heavy illegal OHV use.” By their own admission in court proceedings, the BLM does not have the resources to manage or protect the desert from ORVs. Doubling the miles of ORV routes through rural communities and protected desert areas only exacerbates the challenge.

The 2006 designated ORV ROUTES encourage private property trespass by leading up to private land parcels only to disappear and then reappear on the other side of the private land. Riders on these routes plow through resident’s property to connect the dots along fragmented sections of the routes. In this way, the BLM’s designation of routes in rural communities actually encourages trespass. Private property owners and others roundly criticized BLM for the designation of these route fragments, yet they remain in all of the proposed alternatives.

Mojave Desert Can Not Become an ORV Sacrifice Zone

With the new DSEIS, the BLM appears to view the Western Mojave only in terms of motorized recreation and fails to apply its own criteria for minimizing impact on resources.

The Alliance for Responsible Recreation and the Center for Biological Diversity held a workshop in Joshua Tree, California, to pinpoint key failures of the DEIS. Their findings have been submitted to BLM as public comment.

The language in the DEIS is a confusing example of bureaucratic jargon. For example, the BLM plans to change the current terminology from Open and Closed routes to Transportation Linear Features and Transportation Linear Disturbances. This would only cause confusion for everyone: riders looking for open routes, property owners, and law enforcement officers who need clear guidelines in order to do their job. In addition, by designating routes right on top of county service area (CSA) roads, the BLM is in direct conflict with San Bernardino County Ordinance 3973 which prohibits ORVs on CSA roads.

While the BLM claims the WEMO plan is closely coordinated with the larger concurrent Desert Renewable Energy Conservation Plan (DRECP), there is no evidence of this claim. The preferred route network in WEMO undermines the proposed conservation goals in the DRECP and will imperil that planning effort.

Evidence on the ground demonstrates that the BLM has failed to protect valuable desert resources and private property from ORV damage. The most workable solutions are to close sensitive areas to ORV access while focusing on enforcement and education. Additional reforms at the state level, including requiring visible license plates on all ORVs, age limits for riders, and a requirement for ORV insurance will help BLM do their job more effectively. Desert public lands belong to all Americans, and a balanced approach to motorized access will benefit all desert lovers.

Ileene Anderson is a senior scientist and public lands desert director at the Center for Biological Diversity www.biologicaldiversity.org. Phil Klasky is a member of the Alliance for Responsible Recreation and on the Steering Committee of Community ORV Watch www.orvwatch.com.