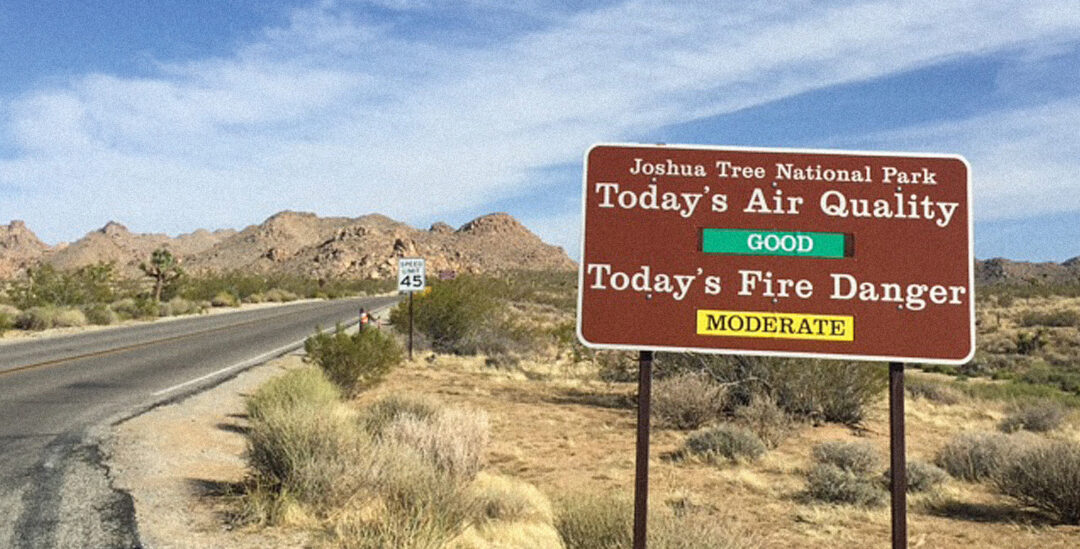 “In the beginning…they laid a woman, Ninmaiwaut (palm) on her back…took a wooden spindle and drilled her. First blood, then fire came forth. This woman then became a palm tree.” –from Tempalpakh: Cahuilla Indian knowledge and usage of plants

As I drive into the Park I’m surrounded by craggy boulder-riddled vistas and, of course, the ubiquitous Joshua Trees. I’m stunned by the colors of spring wildflowers popping up everywhere along the roadside: fields of yellow desert dandelions; sultry pink sand verbena and iridescent purple lupine have turned the usually tan-colored desert expanses into a beautiful symphony of color and passing beauty. Even the Joshua Trees themselves are tipped with fat white blossoms at the outermost reaches of their thick-thorned crowns. It’s hard to concentrate on driving with all of this beauty surrounding me.

But I’m not here to see the wildflowers of this year’s so-called “superbloom,” spawned by last October’s monsoon rains and a favorable early January rainfall. I’m not here to rock climb, or camp, or marvel at the Wonderland of Rocks. I’m here to look for evidence of desert wildfire. I’m here to look for evidence of some of the major fire events that have occurred here in recent years and to see up close the scars they’ve left behind.

Soon enough, I get lucky. I see a break in the thick groves of giant Joshua Trees that the road cuts through. Then, I see one of the rare pullouts along the road. I pull over, and park next to a big metal kiosk that says, “Memorial Fire, May 27-30, 1999.” According to the kiosk, 14,000 acres burned here for three days, ignited by a passing afternoon thunderstorm, making this a major Mojave Desert wildfire event.

I’m the only car that’s stopped here, and I don’t blame others for racing by. This grotesquely transformed desert scene isn’t what most visitors have come to the Park to see. In the distance are healthy, thriving, blossoming Joshua Trees with one of the Park’s small mountain ranges behind, but in front of me is the old burn zone with only a few wildflowers and what looks uncannily like large human or animal limbs strewn about. They’re the trunks and limbs of Joshua Trees that burned and fell apart in the Memorial Fire all those years ago.

I wander far into this desert graveyard, taking my time. Up close, I see that many of the downed Joshua Tree limbs are still intact; some still bear charred stains on their fibrous skin that rub easily off onto my fingers when I touch them, even after all this time. It’s as if the Memorial Fire burned just last season, that it hasn’t been 17 years since these trees were torched with flames. But it has. And the site of this burn has been making very slow progress in its recovery toward what it once was. I wonder what’s been sacrificed here, by the Memorial Fire. Certainly, the fire has taken a long-term toll on this patch of the Park’s 1.2 million acres.

According to Matthew Brooks, a Research Ecologist for the USGS and author of many books on Mojave Desert fire ecology, even the desert wildfires spawned by natural causes can now cause irreparable damage to the desert’s fragile botanic and biologic communities. Unprecedented factors such as periods of extended drought, climate change, and, possibly the worst of all, the proliferation of invasive grasses can all combine to make desert fires burn much hotter and faster than in previous historic times. “The high abundance of invasive annual grasses,” he writes, “may lead to excessively short fire return intervals that do not allow Mojave desert scrub species to reestablish.”

After a wildfire event, burned Joshua Trees can survive but often die within the first few years after fires, due to drought and other stresses on their re-sprouts. It’s likely that the Memorial Fire has left behind permanent scars; these sacrificial Joshua Trees will not be replaced. I wonder what these facts mean for the Joshua Tree ecologic zones throughout the rest of the Mojave Desert; after all, Joshua Tree National Park is a microcosm of the Mojave’s huge matrix.

I’m deep in the old burn zone now and feeling a little sad at the overwhelming sense of loss I see all around me. A kit fox scurries past me and disappears into a hole. Overhead, a lone raven makes its timeless and haunting “caw, caw,” as if to wonder aloud what I’m doing out there. I look towards the road. Not one other car has stopped at the Memorial Zone lookout and kiosk pullout.

As I sift through this desert, I imagine the sequence of events that took place in the frantic efforts to subdue and control the Memorial Fire.

I imagine how this fire may have played out. As a lightning strike, it probably started when a pinyon pine tree caught fire on the small mountain that rises to what I guess is around 5,000 feet. It then was fueled by heavy winds from the passing, late spring thunderstorm and then ripped through the chaparral at lower elevations: plants that include Manzanita and Juniper. Unfortunately, all of the pinyon pine and chaparral plants are highly flammable and burn clean and hot. The fire may have made its way downhill until it reached the Joshua Trees in this high desert woodland-featured terrain. Here it torched through many acres of invasive grasses that would have been thick, calf-high, and tinder-brown, dried to easy flammability by the hot daily temperatures of a long spring season.

For months, there would have been vivid reminders that a fire had shredded the area: bits of burned fire hoses, perhaps the odd backpack, even a firefighter’s shovel left behind. Yellow police tape would have clung to healthy Joshua Trees on the edge of the burn zone to keep the public out, tourists zipping through the Park. Then winter rains would have come, and the charred reminders of the Memorial Day Fire would begin to fade into the comfort zone of smudged memories.

With the arrival of spring, the burn area would have been beautifully, if briefly, transformed with the appearance of some of the wildflowers I still see here today. And just like today, numerous species of invasive grasses would have made the burn zone, temporarily, just a little more green than it had been for so many months before the massive burn.

If other Park visitors took the time today to get up close to the beautiful-ugly remains of the Memorial Fire, they’d be shocked, like me, to see how little of the permanent desert woodland has regrown. They would see only a few lone cholla cactus – their twisted, needled fists on the verge of breaking into their spring blooms – and a few Joshua Trees, defiantly upright, burned on their upper arms, but healthily alive on their trunks and lower limbs. Some even had flowers bursting from their crowns, just like their neighbors outside the burn zone.

It’s time for me to get back to the car and drive onward. The afternoon is deepening, the wind is picking up momentum, and the temperature is dropping as clouds from a predicted spring rainstorm begin to move in and cast long shadows across the Wonderland of Rocks. I will be heading to the Park visitor center at 29 Palms, an hour away where I plan to visit the Oasis of Mara, filled with a centuries-old grove of native Washingtonian Filifera palms. Here the desert Indian people routinely set burns to remove the dead thatch and maintain the health of the grove. I will see the evidence of old burn scars on their trunks.

It’s not a little astonishing that different ecologic zones in the same Mojave Desert can be so devastated, or regenerated, by wildfire. This is another one of the desert’s great mysteries and intrigues, and another demonstration of the powerful presence and role of wildfire here.

Before I can drive away from the Memorial Fire site, something catches my eye across the road. At first, I think it’s a red balloon, snagged on a creosote bush. As I walk closer, I see that it’s a huge Hedgehog Cactus, covered with giant red blossoms, flaming up against the subdued earth tones of the Joshua Tree and the granite boulders rising behind it.

They’re red. The color of fire.

“A Hot, Clean Burn” is excerpted from the forthcoming book, “Fire On the Mojave: Stories from the Deserts and Mountains of Inland Southern California,” by former USFS and BLM/CA Desert District wildland firefighter Ruth Nolan, M.F.A., Professor of English, Creative Writing and American Indian Literature at College of the Desert in Palm Desert, CA.