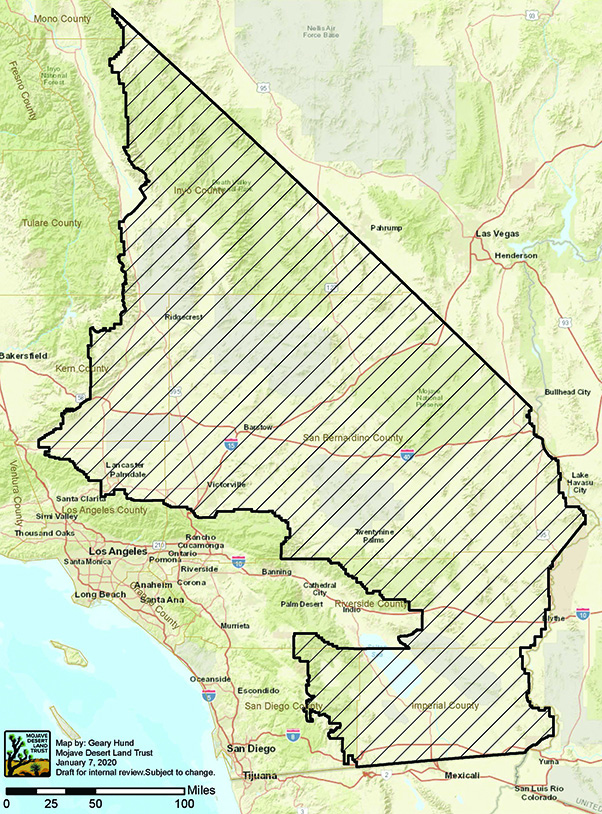 Public support for a public resource

By Susy Boyd and Geary Hund | Despite making up nearly one quarter of California and representing one of the largest intact ecosystems left in the lower forty-eight states, California’s 25 million acres of desert lands receive very little state funding for conservation projects. By contrast, other California regions (such as Tahoe, the coast, Santa Monica Mountains, and the Bay Delta) receive millions of dollars from special funds, taxes, and bonds because they are represented by state conservancies. Conservationists want to deliver the same benefits to California’s Mojave and eastern Colorado Deserts by establishing a new state conservancy for our California deserts region.

A transformation has taken place in California’s deserts in recent years. The California deserts region has become an international destination with visitation to Joshua Tree and Death Valley National Parks and to the Mojave National Preserve increasing by 130%, 110% and 59%, respectively within the last decade. Attracted by the iconic Joshua tree, spectacular spring wildflower displays bursting with color, dramatic mountains rising from the desert floor, gangly cholla cactus, brilliant star-studded night skies, and the renowned desert tortoise, visitors have the opportunity to experience a singularly unique and irreplaceable environment. Many different groups have taken advantage of the possibilities for desert recreation including hikers, campers, off-road vehicle enthusiasts, rock climbers, astronomers, rock-hound groups, history buffs, explorers, and those simply seeking solitude and peace.

Locally, the California deserts serve residents across eight counties contained within the proposed California Desert Conservation Area. This is an impressive population bloc exceeding 19 million residents – 48% of the entire state. The rise in public interest in California’s deserts has provided a regional economic boost: direct travel spending for the desert region amounted to $7.6 billion dollars in 2018, with an increase of 6.7 percent between 2017-2018. Desert tourism and travel generated 73,000 jobs in 2018 while providing $609 million dollars in tax revenue for local and state governmental entities. As the desert lands have increased in popularity and revenue provision, they in turn require funding so that we may work towards conservation land acquisition, restoration and management, and education to preserve these invaluable resources.

As our California deserts have gained in popularity, they have simultaneously been met by a wide range of threats. Invasive plants such as Mediterranean grass and a variety of brome grasses and mustards have displaced native vegetation, creating continuous fuel loads that significantly increase the risk of wildfire. Climate change has imperiled and impacted both the range and recruitment of the Joshua tree and other native desert plants and wildlife, as noted by Joshua Tree National Park Superintendent David Smith. Development, in the form of renewable energy projects and urban sprawl, is resulting in significant habitat loss and fragmentation. Mining, ground water pumping, and other proposed resource extraction projects are on the rise.

In spite of low biomass density, the California desert region is graced with high biological diversity including 1,500 plant taxa, the threatened desert tortoise, and desert bighorn sheep − all requiring active management to ensure their continued existence. Management practices include the protection of core habitat, maintenance of wildlife corridors to protect genetic diversity, and planning for resilience to climate change.

However, the combination of these threats has resulted in a significant loss of desert birds, wildlife, and plants. Desert tortoise are declining at a startling rate, raising concern for their future survival. Desert bird populations have plummeted, with sites in the Mojave Desert losing an average of 43 percent of their breeding bird species.

These threats to the desert, together with its extraordinary diversity of natural resources, rich human history, geological and scenic resources, call for greater attention and protection than it currently receives. Greater recognition and investment by the State of California would help achieve the needed conservation of our desert natural resources.

Both the Mojave Desert Land Trust (MDLT) and Defenders of Wildlife (Defenders) have determined that the formation of a new or expanded conservancy or conservancy program would bring greater investment in desert conservation by the State. In February 2020, Assembly member Eduardo Garcia, who represents the Coachella and Imperial Valleys, introduced Assembly Bill (AB) 2839 to form a new California Deserts Conservancy.  Upon the bill’s introduction, MDLT and Defenders began a coalition effort with other conservation groups to build support for the legislation.

There are eleven state conservancies and conservancy programs in California, including one conservancy representing one small portion of the desert, the Coachella Valley Mountains Conservancy (CVMC). This conservancy was formed in 1991 within California’s Natural Resources Agency to acquire desert conservation lands in the Coachella Valley area “ . . . to provide for the protection of wildlife resources, the public’s enjoyment, and the enhancement of recreational and educational experiences consistent with the protection of the land.” CVMC has received $83 million dollars and has acquired more than 96,000 acres; provided for public access; and distributed grants to non-profit
organizations such as the Friends of
Desert Mountains, tribal groups, and public agencies.

The Sierra Nevada Conservancy, which was established by legislation in 2004 and covers an area similar in size to the proposed California Deserts Conservancy, has achieved important conservation successes by securing more than $134 million dollars to date. Its mission, in part, is “. . . to initiate, encourage, and support efforts that improve the environmental, economic, and social well-being of the Sierra Nevada Region, its communities, and the citizens of California.” The Sierra Nevada Conservancy works with governmental, tribal, and environmental partners, engaging in a wide range of conservation initiatives. The conservancy has developed a Framework for Resilience, Resource Assessment, and Blueprint for Restoration; launched the Watershed Information Network; coordinated the annual Great Sierra River Cleanup; and elevated their efforts towards restoring the health of the Sierra Nevada watersheds and forests with the ambitious Watershed Improvement Program (WIP).

Many of the same types of conservation initiatives could be launched in our California deserts with the formation of a California Deserts Conservancy. As with the examples presented above, the vision for the conservancy is to cross-collaborate with governmental agencies, tribal interests, and non-profit conservation groups. The conservancy would, as described in AB 2839, “ . . . undertake various conservation activities . . . and restore that region’s natural, cultural, archaeological, historical, and physical resources, among other functions . . . ” across the Mojave and Eastern Colorado Deserts. The bill would provide for the conservancy to authorize guidelines and priorities for conservation projects and programs throughout the California deserts region. It would authorize grants and loans for collaborative partners in order to carry out the bill’s provisions. In addition to conservation efforts, funds would be provided for public access and education work.

A wide range of organizations strongly supported the effort to move AB 2839 forward after introduction by Assembly member Garcia. Twenty-five signers from regional, state, and national conservation and social justice groups sent a letter of support for AB 2839. The effort was gaining momentum, when, as with much of life in America, the COVID-19 pandemic changed everything.

In response to the pandemic, the legislature had to reassess and redirect its priorities to address public health issues and the economic impacts resulting from the pandemic. AB 2839, along with other bills, was put on hold for this
legislative session. The coalition of groups led by Defenders of Wildlife and the Mojave Desert Land Trust will continue to build support for the establishment of a desert conservancy or conservancy program.

The focus of the coalition has transitioned towards a near-term strategy to advocate for greater investment by the state and federal government in “shovel-ready” conservation projects, public access, and public education projects that would achieve some of what a conservancy would ultimately accomplish. These efforts are entirely consistent with the California legislature’s and federal government’s goals of post-pandemic economic stimulus and recovery. To achieve that end, the coalitiondeveloped a survey to circulate among various desert partners and solicit a list of projects that could be presented to legislators and carried out with bonds or other funding over the next two years. These projects will address many of the deserts’ high priority needs such as wildfire prevention, climate change resilience, recovery of endangered species, and other desert conservation goals while providing stimulus for the desert region’s hard-hit economy. Upon completion of the desert project solicitation survey and once the list of desert conservation infrastructure projects has been presented to the legislators (and hopefully funded), the coalition will turn its efforts to outreach to build widespread and diverse support for a conservancy or conservancy program.

While the timing of an opportunity to reintroduce the California Deserts Conservancy bill remains uncertain in the current legislative climate, the coalition, along with other desert advocates, will remain steadfast in its efforts to realize the formation and funding of a Conservancy for the benefit of California’s spectacular desert natural resources and local communities.

Susy Boyd works as Public Policy Coordinator for Mojave Desert Land Trust. She holds a Master of Natural Resources
degree from Oregon State University where she researched climate change impacts on Mexico’s Yucatan forests. She is an avid explorer and outdoors lover.

Geary Hund currently serves as the director of the Mojave Desert Land Trust. He began his career with California State Parks, and has since worked for The Wilderness Society, the Coachella Valley Mountains Conservancy, and the U.S. Fish and Wildlife Service. Geary first discovered and fell in love with the desert in the late 1970’s and he’s been dedicated to its protection ever since.

Kim Delfino of Defenders of Wildlife and Jessica Dacey of the MDLT also assisted with the article.