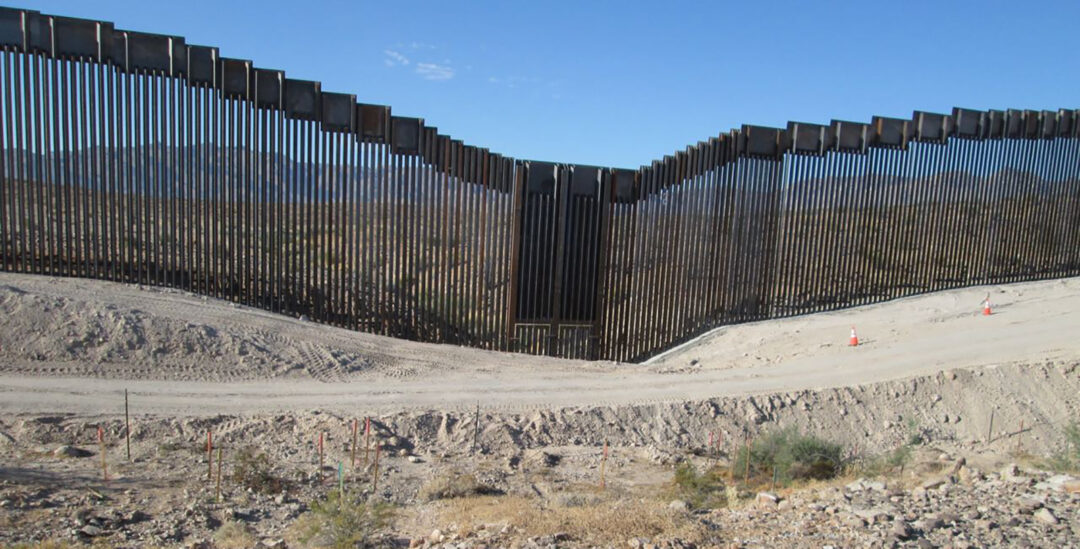 A BORDER WALL IN THE JACUMBA WILDERNESS AREA

Two and a half months of construction in the Jacumba Wilderness have produced several miles of a border wall, extensive environmental damage, a thicket of procedural and legal questions, and very few answers. Because vehicular traffic is prohibited in congressionally designated Wilderness, the area was once visited by only a few hikers and an occasional Border Patrol officer. In the interest of border security, most federal environmental laws have been waived, and now heavy equipment, construction materials, law enforcement vehicles, and security personnel travel on wide, newly constructed reach the border with Mexico.

From State Highway 98, a large gravel road enters the Wilderness from the west. Forty feet wide, it has been surfaced with a polymer called Soiltac to reduce dust. The road climbs a low hill with a posted 15% grade, crosses a south facing slope, and then extends another two miles southward through Skull Valley to the border. Above ground and along one edge of the road, a flexible black plastic pipeline, twelve inches in diameter, carries water used for dust suppression and for concrete manufacture. A still wider road runs within a few feet and parallel to the border and provides an estimated ten miles of access for construction. On June 27th, this author saw at least five large water trucks along these roads and five huge excavators positioned at the border. Also near the border was a concrete mixing facility that included water tanks and a conveyor belt assembly for transporting gravel. Other supplies included several shipping containers, presumably to hold supplies, an office building, and a picnic table under a portable sun shade. Bollards had been distributed along a portion of the road awaiting installation, and an extensive trench had been excavated to receive concrete which would form the base of the wall.

Several weeks later in July, Ms Edie Harmon and two other Imperial County residents walked to the border in Skull Valley and photographed the wider road and the completed wall extending to the east. Looking in the opposite direction, the border road had been extended westward toward the next and larger Davies Valley. Unfortunately, with summer heat and the distances involved, only government and personnel authorized to drive vehicles in the Wilderness have convenient access and knowledge of the work underway in this second valley. Although waived for this construction, the Wilderness act of 1964 once promised that these places were to be “protected and managed so as to preserve their natural conditions.”

At a low point in Skull Valley, there is a small but significant population of crucifixion thorn, a California Endangered Species. This plant has a tap root enabling it to reach water at depth, but it also has another system of roots utilizing surface water when available. This surface water follows a wash from the higher elevations in Mexico, north across the border, and into the lower elevation sink were the crucifixion thorn is found. On the U.S. side of the border, watermarks at least a foot higher than the floor of the wash give evidence of the quantity of water involved. The construction road along the border has filled in this wash, completely blocking its drainage. Topographical maps of the area indicate at least three other places where the border road intersects and blocks, identifiable washes. In a July 14, 2020, conference call, Paul Enriquez, responsible for construction managed by the Department of Customs and Border Protection (CBP), gave assurances that the contractor was investigating the drainages and making every effort to mitigate the potential problem. On August 2, Ms Harmon returned to the border and reported that the principal wash in question had been crossed and blocked by the recently constructed wall. The wall and road have the potential to significantly alter the ecological regime in the Wilderness Area.

The long road leading into the Wilderness from the east has other problems. On July 19, 2020, off-road vehicle tracks were observed crossing one of its berms and heading into the open desert. Apparently the new opportunity to explore in an otherwise unaccessible area was irresistible. The graded road also crosses several smaller washes that ultimately wend their way to the sink with its stand of crucifixion thorn. Again the alteration of natural drainage patterns is probable and will be significant.

On June 12, Ms Harmon and another friend located an old foot trail not far from the border road. With a layer of desert varnish, the trail is a relic from much earlier times and is similar to other finds in Imperial County. On other occasions, pottery shards have been located in the nearby washes and hillsides, and there are suggestions that at least one of these locations was a sacred site. Requirements for archeological surveys which would normally precede any major project may have been either waived or were inadequate.

On the July 14 conference call, Customs and Border patrol indicated that there would be no wall built in border mountains immediately east of Skull Valley. They maintained that although it was a natural barrier to human travel, the mountains would not impact movement of bighorn sheep. Unfortunately bighorn sheep have been documented only to the west of Skull Valley, and so this “open” section of border will not be of use for these animal.

The water used for construction is being obtained from several wells that have been recently drilled to the east of the Wilderness. These tap into an aquifer that is the sole source of potable water for the nearby communities of Ocotillo and Nomirage. In the past five decades, the water table in western Imperial County has dropped significantly, and after extensive litigation, U.S. Gypsum Corporation has had limitations placed on its use of this aquifer for commercial purposes at their Plaster City factory. Given the diameter (12 inches) of the pipeline connecting these wells to the construction site, it is reasonable to have grave concerns. Imperial County regulations require that a permit must be obtained in advance of drilling any water well. When Ms Harmon asked the County Planning Division for data on the water extraction, they were entirely unaware of the existence of the wells. CBP acknowledged the existence of the wells but declined to provide any data on depth, capacity, quantity, or quality of the water. Subsequently, the County issued a Cease and Desist Order to the responsible contractor, but at the time of this writing there has been no response and water still appears to be flowing. In the July 14 conference call, CBP gave assurances that the data would be available when they have completed the application for a permit !!! In view of the waiver of federal environmental requirements related to the wall, it is not entirely clear whether the Imperial County regulations are binding upon CBP. At least three legal opinions believe that they are, and CBP agreed to apply to the County for water well permits and provide data to the County and USGS. Nevertheless, it is likely that before the Sierra Club’s legal case on other border wall issues can be resolved, the wall in the Jacumba Wilderness Area will be completed!!

Legal issues go beyond the county regulations. The aquifer which is being tapped by CBP extends underground into Mexico. A number of agreements between the United States and Mexico relate to surface waters that cross the border. Access to ground water that is shared mutually by the two countries is a largely unresolved question.

Still another matter involves the transfer of money from the United States military budget to the CBP budget for construction of the wall. Predictably, this has been challenged in court. On July 31, 2020, an action by the U.S. Supreme Court permitted this transfer, overturning a contrary ruling issued on June 26, 2020, by the 9th Circuit Court of Appeals.

The most obvious conclusion is that construction in the Jacumba Wilderness was pursued with haste and for political purposes. Environmental analysis was either ignored or postponed to the indefinite future. Public input was solicited in a perfunctory way, and later inquiries were met with platitudes rather than answers. Legal issues involved in the construction are being pursued retroactively rather than in the planning process. The usefulness of a border wall for immigration policy was never subject to an open debate, and the decision to proceed was made administratively. If nothing else, the events which have occurred in Imperial County demonstrate the importance of our national environmental laws. While these laws may, or may not, lead to wise decisions, they do require that every possible effort be made to determine the consequences of major proposals before they are actually put into action. It is also imperative that the public be willing to monitor project activities and document issues of concern as they occur. Without documentation, it is impossible to hold government agencies and their contractors accountable. Blindly trusting that government contractors will do what is necessary to protect environmental resources and to preserve cultural resource values is wishful dreaming.

Craig Deutsche is managing editor of the Desert Report, a retired high school teacher, and a desert rat since the early 1990s. The Carrizo Plain and Imperial County have been areas of particular interest.