An interview with Ehsan Masood by Birgitta Jansen

Science journalist and senior editor at the journal Nature, Ehsan Masood, recently wrote a book about a subject worth thinking about: GDP; The World’s Most Powerful Formula and Why it Must Now Change (2021). We spoke on the phone January 27, 2022. He was at his home just outside north-west London. 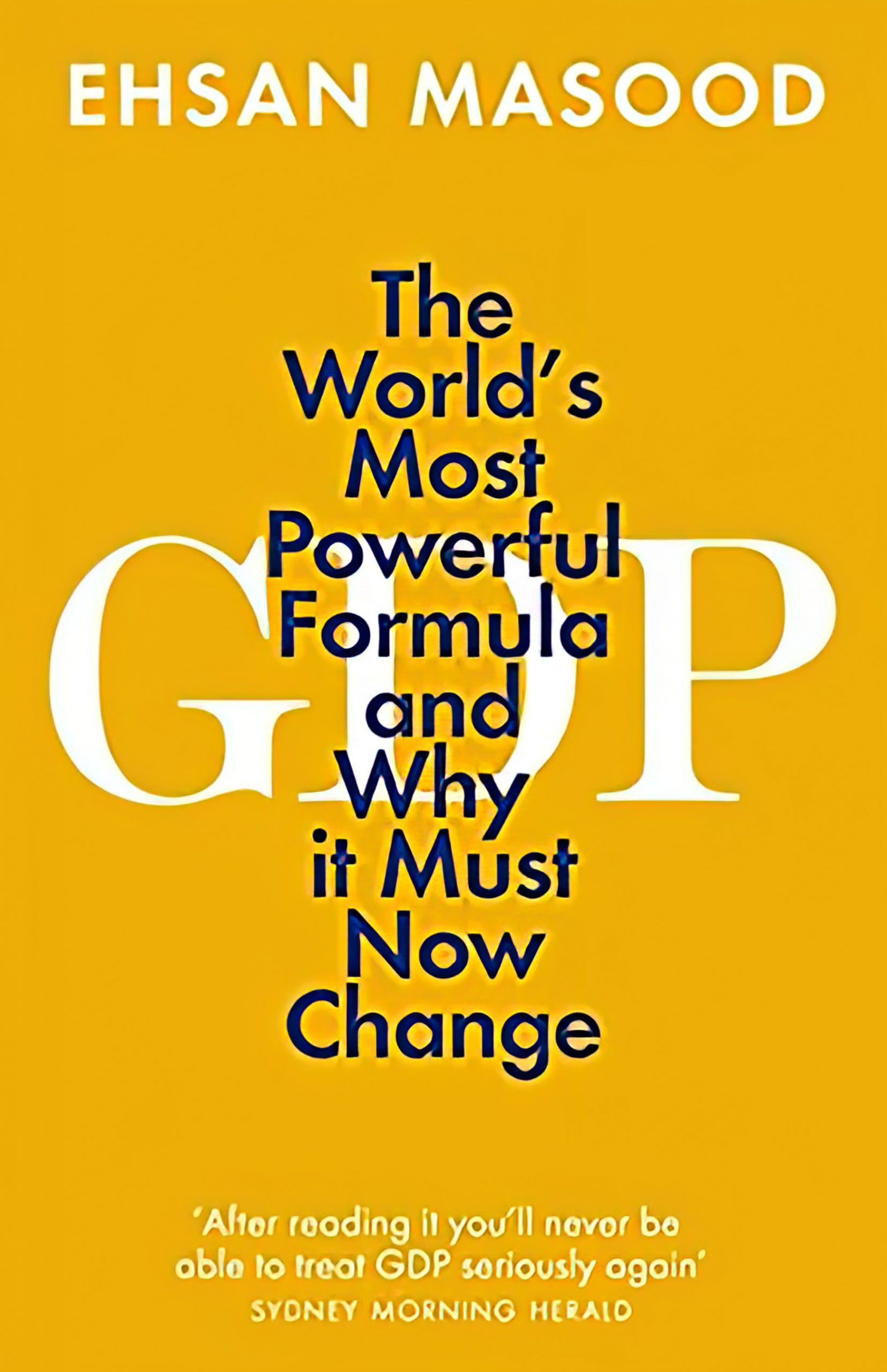 The GDP (Gross Domestic Product) “is the world’s principal measure of economic growth.” 1 According to one of the most commonly-used measures, it is the sum of the money we spent, for instance, going shopping (C), plus the large sums spent and invested by corporations (I), plus money invested by government (G). Money that is spent on the purchase of goods outside the country (M) is subtracted from the money earned from sales outside the country (X) and that total is then added to the sum of money spent within the country. In short: Y = C + I + G + (X – M). 2

Masood maintains that, since the GDP is now almost universally utilized as a measure of a nation’s economic success, it has become the world’s most powerful formula. So powerful, that when the GDP goes down, it takes politicians’ chances for re-election down with it. Despite its almost global acceptance, even its designers accept that it is a flawed measure because it is based on the singular assumption that: “economic growth is always good." That assumption is now in question. A healthy rise in the GDP can mask many ills such as poverty, pollution, and environmental degradation.

The GDP was designed in the US and the United Kingdom in the 1930s and 1940s, and during that time economic needs and requirements were different. For instance, British economist John Maynard Keynes advocated for government spending to boost countries’ economic development with the intention to protect existing jobs and create new jobs by investing in big-capital-intensive projects. The expectation was that this would increase economic growth and GDP. 3 It did. The adoption of these ideas led to a system that stimulated and rewarded large scale industrial and commercial development. But this in turn, led to large scale environmental degradation and other negative unintended consequences.

In many instances, both past and present, it tends is not to be the corporations who need to confront this these problems or bear the costs for the clean-up and restoration of the land, but the taxpayer – that is, if the land can be restored. Regardless of who pays, these expenses also boost the GDP. When money moves around, it counts.

But we are now paying the price for accepting without question that “economic growth is always good.” Climate change is a good example of that.

Masood agrees that politics and economics are closely related, and inextricably intertwined with environmental degradation. In his amiable voice with a slight British accent, he explains that, “The practice of neo-liberal economics has closely followed a politics that supports the idea of small states, low taxes, and which favors developing big industries.” He continues, “Although the GDP was developed nearly 94 years ago, governments still organize their countries economic affairs along these lines. The other relationship between politics and economics is that economic research is funded by government grants, which determine priorities. Also big corporations are large donors to political causes. This gives them influence on the political decision making processes. It has always been this way but what is different now is the scale of corporate power.”

“In addition, the GDP tends to reward traditional, fossil fuel-powered economic development. Since the fossil fuel industry’s infrastructure is mostly in place, it can move forward much more quickly than greener development.” In essence GDP incentivizes economic sectors that increase the GDP regardless of environmental degradation.

Masood’s example of this is coal fired power. “Countries need power therefore they are still investing in the extraction of coal. The GDP is constructed in such a way that coal fired power plants can quickly increase the GDP. This does not encourage countries to consider alternatives. Good access to electrical power is tied to the GDP.”

The Dilemma and the Need for Change

Now we find ourselves on the horns of a dilemma, a conflict between the continuing need for large scale economic growth and the increasingly urgent need to take care of our biosphere. The biosphere is a closed system which means that nature’s resources have limits.

But how do we to make the necessary changes on the scale that is necessary? It would not entirely solve the problem, but addressing the way in which the GDP is calculated could go a long way towards facilitating a much needed transition to a less harmful way to conduct business.

Masood points out that although “the world is driven by the GDP,” it needs to be kept in mind that “the GDP is an artificially created index.” In spite of the fact that there is an economic incentive not to do so, there are now a number of proposals under discussion to make the GDP more inclusive. For example, a proposal that Masood supports is to continue the use of the basic GDP formula but subtracting the costs of externalities. “Going back to the example of coal-fired power stations,” he explains, “they have positives and negatives. Considering both would make for more informed decisions. The value of increased spending on healthcare as a result of water and air pollution, is quantifiable. These costs could be subtracted from the gains.” That would amount to economic growth minus the costs of that growth.

Masood continues: “China very nearly did this about a decade ago. They called it the Green GDP. Unfortunately they received a lot of pushback from the provincial states. But they are seriously thinking along these lines and they are very, very keen. They understand economics as well as the ecological costs.” When I expressed surprise at this because I have never encountered any reporting on this in the mainstream media, Masood replies, “You’re right. But it does turn up in more specialized publications. There is a lot of innovation going on in China.”

There are various proposals for what could be changed such as including measures that address factors that matter in our lives: such as social justice issues, wellbeing, education, living standards, healthcare, and unpaid work. Many, including the majority of environmentalists, support a dashboard of measurements, others prefer a single number. 4 Masood feels that, “The GDP as it is has important strengths that should be preserved. One major strength is that it has been set according to internationally agreed rules. It would be very difficult to obtain agreement again on that level, especially when considering the complexity involved.”

Clearly, pushback to change is going to be an issue. Masood views inertia as a factor in this. “The GDP has been in use longer than 50 years. Whole industries were dependent on this as they continue to be today. Clearly to make changes in this has implications. Even explaining it is complicated. Then it depends a great deal on who is interested. Consider who benefits from the GDP as it exists today: the rich and the corporations. Thus not everyone is interested in changing it. It would be beneficial if the U.S. and China could collaborate on this, because both stand to gain. An added complication is that policy makers rely on academics. And the academic community is not united on this issue either.”

How to Change the GDP

A process exists in which researchers from all UN member states have a voice to propose how the GDP can change. Masood emphasizes that environmentalists need to recognize the dominance of the GDP and also that there is a need for them to “engage with GDP’s processes just as much as they do for climate change.” 5

However there seems to be little information publicly available on how the GDP can be changed. Who does this and what is the process? Considering that it is, as Masood calls it, the most Powerful Formula in the World, one would think we’d know more about this.

Masood clarifies, “What looks like secrecy, has developed more by default than design. The GDP’s rules are set by a group of academic statisticians through the United Nations Systems of National Accounts (SNA), which is organized by a branch of the United Nations. Until very recently, they were horrified if non-statisticians tried to understand their complicated systems. So the UN never reached out to make this a more open process as like they do, for instance, with the climate change process. But that is now changing. There is a new head who is more interested in letting in some light on the process of changing the GDP.”

Discussions on the next revision to the GDP have just begun and are to be finalized in 2025. One change already made is that researchers and delegates from the developing countries are more involved than has been the case in the past. The process now provides a route for all countries, rich and poor, to have an equal stake in deciding how the world’s economies should measure what matters. Change, whether evolutionary or revolutionary, must be inclusive and accountable.

And the biggest change? During this current process the rule setters will consider how the GDP could best take the needs of the natural environment into account. Most importantly, emphasizes Masood, “Today’s industrial development must be weighed against environmental costs.”

Birgitta Jansen has been an active volunteer in Death Valley National Park. Currently residing in British Columbia, she is a managing editor of the Desert Report, has written previously on a number of environmental topics, and has completed a book about the October 2015 flash floods in Death Valley NP.